Patrick Navas sees John 3:16 teaching the subordination of Christ to God. That's to say Christ was sent to the world by God. He doesn't find it teaching Jesus to be consubstantial with God. 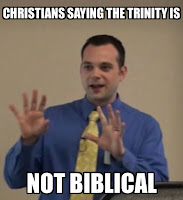 His three main points against the Trinity belief:

1. Doctrine of the Trinity is not articulated in the Bible. Trinitarian theologians admit this.

2. Identity of God and Jesus distinct from each other.

In 1 Cor 8:6 Paul spells out the identity of God and identifies Him as the Father:

In Acts 2:36 Peter is purported to have said:

"Therefore let all Israel be assured of this: God has made this Jesus, whom you crucified, both Lord and Messiah."

The authority Jesus had was not due to his ontology but rather it was given to him by God. A derived lordhsip. The "lord" has a God. Jesus has a God.

There are some texts (mostly in John) which ascribe personal qualities to the Spirit but those texts can be understood as personification as per Wisdom in Proverbs 8.

[Note: The Jews, as articulated by rabbi Tovia Singer, believe the Holy Spirit is the active force of God]

"Gregory of Nazianzum could still say in 380, Some of our theologians consider the Holy Spirit to be a certain mode of the Divine energy, others a creature of God, others God Himself. Others say they do not know which opinion they ought to accept, out of reverence for the Scriptures which have not clearly explained this point."

If the Trinity is not explicitly taught in the NT how can it be reconciled as an essential teaching of Chrisianity?


Tovia Singer: Does the New Testament Teach Jesus is God?