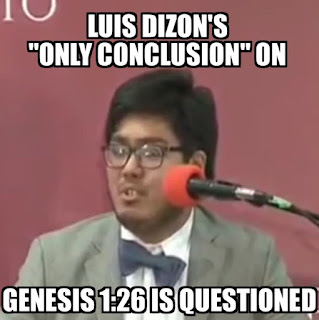 Luis Dizon contends Genesis 1:26 can only be concluded as a reference to plurality of persons in the being of God (with a strong intimation this plurality is the 3-self Trinity belief). Here's his conclusion with the assistance of Gleason Archer:

It is also important to note that the Trinity does not occur exclusively in the New Testament, but can be traced back to the Jewish scriptures (the Old Testament, which came centuries before Christianity). Several times in these scriptures, God speaks in the plural. A prominent example of this is close to the beginning of the Bible, where God says, “Let us make mankind in our image, in our likeness...” (Gen 1:26, cf. 3:22, 11:7). It also appears in the book of the Jewish prophet Isaiah. Here, God asks, “Whom shall I send? And who will go for us” (Isa 6:8)? The common Muslim argument when faced with these verses is that God is using the plural of majesty, which is a custom in which a royal figure speaks in the plural. Muslims argue that since Allah frequently speaks this way in the Qur’an,141 then the same must be the case in the Old Testament. However, this explanation is anachronistic, because the plural of majesty is not used anywhere in the Old Testament. In fact, the concept did not even exist until after the Old Testament was completed. As biblical scholar Gleason Archer notes:

This first person plural can hardly be a mere editorial or royal plural that refers to the speaker alone, for no such usage is demonstrable anywhere else in biblical Hebrew. Therefore, we must face the question of who are included in this “us” and “our.” It could hardly include the angels in consultation with God, for nowhere is it ever stated that man was created in the image of angels, only of God. Verse 27 then affirms: “and God [‘elohim]created man in His own image, in the image of God he created him; male and female He created them” (NASB). God—the same God who spoke of Himself in the plural--now states that He created man in His image. In other words, the plural equals the singular. This can only be understood in terms of the Trinitarian nature of God. The one true God subsists in three Persons, Persons who are able to confer with one another and carry their plans into action together—without ceasing to be one God.142

On the basis of this information, the only conclusion we can come to is that the passages where God speaks in the first person plural demonstrate a plurality of persons within the being of God.

1. There are other Christians with differing interpretations and thus do not share Luis Dizon's view that an idea of plurality of personhood is the "only conclusion" nor Gleason Archer's appeal to the Trinity belief (which ironically is anachronistic in itself!)

2. Plurality doesn't necessarily mean 3. As we know the plurality of 3 did not become recognised until at least 381 CE. For those wondering why not 325 CE? "The Nicene Council only concluded that the Father and Son are ontologically one: it did not include the Holy Spirit in the co-substantial relationship supposedly obtaining between the Father and Son" [Edgar G Foster]

4. Confusion for 14 centuries. This point of confusion is a philosophical headache for Trinitarian apologists. 1 Cor 14:33 states "for God is not the author of confusion" yet Luis' conclusion would imply there was confusion for 14 centuries (evangelical Christians believe Genesis was written 1400 years ago). In fact the duration of confusion would be greater still as the Trinity was developed from the 4th century onwards so the implication in the Trinitarian Christian worldview is that God left people in confusion about Him and Genesis 1:26 for 18 centuries!

Thus all those faithful believers and Prophets, including Moses who is traditionally considered to be the author of Genesis amongst evangelical, were all left in confusion concerning this supposed plurality being taught in Genesis 1:26!

CAN YOU NOT SEE THE PROBLEM HERE?

Let's drive this problem home further still. In Exodus 33:11, it is taught Moses had the Lord speak to him face to face as one speaks to his friend. Despite this, the Trinitarian narrative contends Moses did not know about true the nature of God; that's to say he had a deficient understanding of God because he was unaware of the Trinity belief.

Isaiah 41:8 describes "Abraham as God's friend "But you, Israel, My servant, Jacob whom I have chosen, Descendant of Abraham My friend," yet Luis' theory would have us believe Abraham, too, had a deficient understanding of God as the Trinity, according to the evangelical narrative was not revealed during Abraham's time.

Do Luis and others who argue for the Trinity in Genesis 1:26 not see the problems that come with such assertions?

Let's concentrate on providing some divergent views on Genesis 1:26 to show Luis' view that it's the "only conclusion" one can arrive at to be baseless:

Commentary from the Cambridge Bible for Schools and Colleges surveys a number of explanations put forward over the years for "let us make" in Gen 1:26. Interestingly, the Trinity explanation is considered untenable:

Until recently, the traditional Christian interpretation has seen in the 1st pers. plur. a reference to the Three Persons of the Blessed Trinity. The requirements of a sound historical exegesis render this view untenable: for it would read into the Book of Genesis the religious teaching which is based upon the Revelation of the New Testament.

At the culmination of the list of various explanations the commentary concludes "The two last explanations appear to be the most probable". The last two being:

1. Use of the Plural of Deliberation
2. The old Jewish explanation that God is addressing the inhabitants of heaven

Dr Michael Heiser on Genesis 1:26 and the name Elohim

Michael Heiser gives his explanation, which differs and agrees with the more common:

Conclusion – from the TEXT: God announced to his council his idea to create mankind (“hey, guys, let's do this!” – a sort of exhortational declaration), then HE (and he alone, by virtue of the GRAMMAR) created humankind in HIS own image (not theirs).

He also explains the history of the name Elohim which does away with the idea that Elohim refers to a plurality in personhood:

It is of course true that "elohim" is MORPHOLOGICALLY plural (morphology refers to the construction or "shape" of a word). The - im ending of elohim makes the noun plural. As Psalm 82 (see above) tells us, elohim CAN be plural in the Hebrew Bible. The same psalm, though, also has elohim as a contextually clear SINGULAR (the morphologically plural word came to be used as a proper name for a singular deity).

Rabbi Tovia Singer offers a list of authorities for evangelicals who do not espouse such conclusions about the Trinity being in Genesis 1:26. His list includes Liberty University's commentary on the Bible, NIV Study Bible amongst others. You can check this for yourself. Here's a snippet which shows another Christian authority siding with one the traditional Jewish views on Genesis 1:26 rather than what Luis Dizon and Gleason Archer contend:

Yet, the NIV Study Bible also confirms in its commentary on Genesis 1:26,
Us… Our… Our. God speaks as the Creator-king, announcing His crowning work to the members of His heavenly court

Edgar G Foster discusses this in his summary of Alan J. Hauser's views on Gen 1:26, which militates against the Luis Dizon's "only conclusion"

Hauser expands on this argument. He does not think that the use of the Elohim in Genesis 1:26 proves that Genesis teaches God's triunity. One reason that Hauser concludes this has to do with the Hebrew word Elohim. Granted, Elohim is morphologically plural as are "us" and "our." But these words, while they might seem to indicate plurality, definitely do not suggest triunity. It must also be kept in mind that in Hebrew it is common for the plural noun to cause the verb to be plural (Cf. Genesis 20:13, 35:7). E.A Speiser therefore renders Genesis 1:26 as follows: "The God said, 'I will make man in my image, after my likeness.'"

In the same piece, Foster also cites Charles Ryrie. Ryrie talks about the use of plural pronouns with relation to God; he offers a striking observation in that there is no limitation to indicate a plurality is only three (i.e. the Trinity). Problem. In addition, from Tovia Singer's survey we see Ryrie considers Genesis 1:26 to be the Plural of Majesty, thus he too disagrees with Luis Dizon's "only conclusion" hypothesis.

Gleason Archer, as Luis Dizon mentions, believes there's no other use of plural of majesty in the OT. Now, this is not a major point of contention but from Jason Dulle it appears there may be some candidates for the use of the royal plural elsewhere in the Hebrew scriptures. Dulle gives possible examples from Ezra and Daniel

The second theory is that the plural pronouns are used as a "majestic plural." This type of language was typically used by royalty, but not exclusively. Biblical examples include Daniel's statement to Nebuchadnezzar, "We will tell the interpretation thereof before the king" (Daniel 2:36). Daniel, however, was the only one who gave the king the interpretation of his dream. King Artaxerxes wrote in a letter, "The letter which ye sent unto us hath been plainly read before me" (Ezra 4:18). The letter was sent to Artaxerxes alone (Ezra 4:11), yet he said it was sent to "us," and was read before "me." Clearly the letter was only sent to, and read to Artaxerxes. When Artaxerxes penned another letter to Ezra he used the first person singular pronoun "I" in one place and the first person plural pronoun "we" in another (Ezra 7:13, 24).

I'd be interested in knowing people's thoughts on these verses. I would like to reiterate, this is not the main thrust of my article, please do not allow this side piece to detract from the points above.

Dale Tuggy considers the arguments for the Trinity in the Old Testament to be "crummy arguments". He's taken aback by evangelicals, who should know better, arguing for this position. In this video I interspersed clips of Tuggy with an evangelist - RZIM'S Nabeel Qureshi - discussing various standard Trinitarian contentions based on the Old Testament.

I'd appeal to Luis and others who may have been exposed to Trinitarian Christian contentions based on the OT like the one discussed in this piece to avail themselves of this video.

There is no statement in Scripture that says, “God is three Persons in one being"