Was there "Taqiyyah" in the Dr Yasir - James White Discussion?

These comments from a young Christian apologist stem from an erroneous idea on Taqiyyah. Luis Dizon thinks Dr Yasir Qadhi may have been practicing "Taqiyyah" in the dialogue with Dr James White at a church. 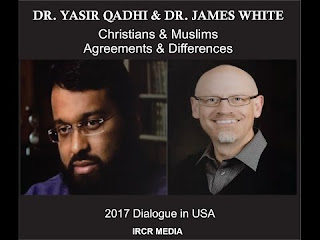 Come on folks, which other group has to deal with this wild-eyed idea that we (Muslims) go around lying ("practicing Taqiyyah") when we talk about our faith? These misconceptions are the product of anti-Muslim propaganda - clearly it's far-reaching and is affecting young Christians in Canada like Luis Dizon. I know there is a bunch of anti-Islam Christian polemicists who propagate such propaganda about the concept of Taqiyya so, sadly, it's not surprising to come across this misconception amongst young Christians.

Let's have a stab at challenging this to help alleviate this problem. Here are Luis' comments:

Furthermore, there is a concern that Sh. Qadhi may be willfully deceiving the people listening because of the Islamic concept of Taqiyyah (dissimulation)...

...And I would like to bring up the topic of Taqiyyah briefly, because I know that that is always on everyone's minds whenever a Muslim preacher or apologist is speaking. I am not unaware that the doctrine of Taqiyyah exists. Was Sh. Qadhi practicing it, or was he not? I'm not going to rule it out, but at the same time, I'd like to remind everyone that we who believe in the principles of justice and fairness adhere to the idea of the presumption of innocence. In other words, you cannot accuse someone of being a liar or deceiver if you don't have any evidence to prove it. If you think that Sh. Qadhi was deliberately misrepresenting what he really thinks, then present your evidence. Having listened to Sh. Qadhi many times, not just in these dialogues but also in his lectures and khutbahs, I have no reason to believe that he is the kind of person who would go around intentionally deceiving people. Maybe he is, but we cannot prove it.

I'd refer Luis and others who may have come across propaganda material from anti-Muslim sources on the concept of Taqiyya to more scholarly authority. In this snippet of an old blog piece I used R. Strothmann’s relevant section in “Shorter Encyclopaedia of Islam” (by H.A.R. Gibb and J.H. Kramers)  and Cyril Glasse’s Concise Encyclopedia of Islam

This term is spelt variously; “taqiyyah”, “takiya” or “taqiyya”.

“Takiya (A.), caution, fear (see glossarium to Tabari S.V. T-K-A) pr kitman, “disguise” is the technical term for dispensation from the requirements of religion under compulsion or threat of injury.” [1]

“Taqiyyah (From the root word waqa “to safeguard”; “self-protection” and hence “dissimulation [in order to protect oneself]”).” [2]

So, taqiyyah (takiya, taqiyya) is concerning dissimulation due to force – i.e. when an individual is forced to conceal.

Sadly, the propagandists – in order to obtain an unchecked platform and/or demonize Muslims – have misapplied this term in their propaganda claims of “Muslims are allowed to lie to the non-Muslisms”.

At what level of force is Takiya (Taqiyyah, Taqiya) justified?

“But an individual is not justified in takiya nor bound to hidjra [emigration] if the compulsion remains within the endurable limits, as in the case of temporary imprisonment or flogging which does not result in death” [1]

So, this makes a mockery of the suggestions of “Muslims are allowed to lie to the unbelievers” as even under threat of imprisonment and flogging Muslims are not justified in takiya. The level of force which justifies oneself in takiya is that of an unbearable level.

Takiya (taqiyya, taqiyyah) and the type of lies…

One may ask, what type of “disguise” is allowed under takiya (taqiyyah, taqiyya)?

Let’s be clear about takiya (taqiyyah, taqiyya); “The principle of dissimulation of one’s religious beliefs in order to avoid persecution or imminent harm, where no useful purpose would be served by publicly affirming them.” [2]

“The ethical question whether such forced lies are nevertheless lies, such a forced denial of the faith nevertheless a denial, is not put at all by one “who conceal himself” as he is not in a state of confidence which would be broken by lies or denial.” [1]

So takiya (taqiyyah, taqiyya) is not used to convert folk to Islam nor is it used in Islamic text books or anything of such a nature. It is simply a form of concealment used to avoid persecution