Is Islam to Blame for Grooming Gangs? Right Wing Refuted!

If you're in the West the far right will throw this type of rhetoric your way. This was a tweet from a group trained by Jay Smith. The group is called DCCI Ministries and its run by Hatun Tash and Lizzie Schofield. The tweet reads:

Religion of Islam (its book and its prophet) has low view of women - we can't be surprise [sic] with application of it.[Link to a site which has ties with Tommy Robinson]
This tweet's argument is basically "Islam has a low view of women hence why a lot of these grooming gang members have Muslim names (they end with a link to a website which ahs ties to Tommy Robinson, the link features the names of people convicted of grooming)" 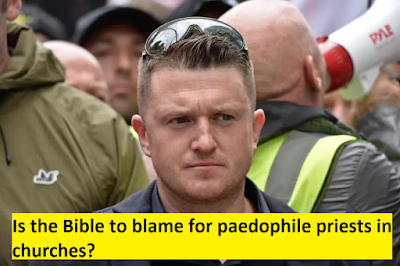 2. The vast majority of paedophiles in this country are of Christian cultural backgrounds.

3. The stats for ethnic minority grooming are only higher for group grooming, white people come up top of the stats for grooming on an individual basis (which is expected as white people make up the majority of the population)

5. These people part of grooming gangs are hardly people taking cues from Islamic texts - unless you think alcohol, drugs and premarital sex is Islamic.

6. This type of propaganda can be turned around just to show how absurd the type of thinking behind this polemic actually is. "In Numbers 31 and 1 Samuel 15:3 boys are ordered to be killed (in the case of 1 Samuel Trinitarians believe Jesus ordered this mass killing of boys) this shows Christianity has a low view of boys thus explaining why there are so many priests and church leaders fiddling and raping young boys - here's s link to s few media reports showing church leaders getting caught in child sex abuse scandals". (I don't support this line of argument - it's simply used to show how absurd the "Christian" propaganda in the tweet is!)

A Refutation of the ISIS is Islam Rhetoric - Tommy Robinson Needs to Read This!

A Reputation for Rudeness Is Difficult to Shake Off, Ask Pfander...