It’s commonplace for Christians to exaggerate the Christian view of love. For the most part this is probably just due to an ignorance on their part and a Westernised liberal mindset rather than the product of some sort of wilful effort to misinform. This is why you get Westernised “Christian” evangelical organisations making such comments on social media:

Thank God for christianity. For a God that loves us even while we were yet sinners, For a God that loves us enough to come down to earth, for a God that just doesn't just create but wants relationship with his Children. It sometimes takes learning about a religion such as Islam to appreciate what we have in Christ. Allah HATES DISBELIEVERS #Surah 3:32 # John3:16#Romans 5:8 [DCCI Ministries via FB]

RC Sproul says: I think there are few things more dangerous than preachers out there preaching that God loves everyone unconditionally

Do Christians really believe God loves everyone unconditionally? No.

Here are three points to think about in this regard.

1. The Bible teaches that God HATES sinners/wrongdoers (sinners would include unbelievers, right?)

4 For you are not a God who is pleased with wickedness; with you, evil people are not welcome.
5 The arrogant cannot stand in your presence.You hate all who do wrong Psalm 5:4-6

Pslam 11:5 is in a similar vein. Additionally, Christians believe God is angry with the wicked (I assume this includes unbelievers)

11 God judgeth the righteous, and God is angry with the wicked every day. [Psalm 7:11]

2. Common sense. Christians believe those who do not accept Jesus will be in eternal damnation (Hell) for eternity. Can you seriously tell me you believe God and Jesus love these people?

Love of God in Christian and Muslim views

God, according to Muslim and Christian beliefs, has a beneficient, providential and benevolent love for everyone regardless of belief/disbelief. The rain falls on the just as well as the unjust. Both the wicked and the righteous have oxygen to breath and both groups receive wealth, health etc..

Likewise, both groups believe God loves the world so much so that He gives a salvific message and thus humans have the potential to be saved.

God abhors the wicked according to the Bible. In Christianity God sends the sinner to Hell, not the sin. Clearly, for the Christian preacher, it would be contradictory to the Bible to say God loves unbelievers the same way he loves the “saved” – Christians will believe God abhors those who he sends to Hell. Christians believe TCVO Jesus will send Muslims, Sikhs, Atheists and Unitarian Christians to Hell. To say TCVO Jesus loves all these “unbelieving” groups would be difficult to reconcile with the aforementioned.

Christian groups who are more into simplistic slogans like the one we are responding to are being a hindrance to a deeper and more healthy understanding of religious traditions.

The Christian group cite this Verse in their social media post (above) yet they have not applied thought to the context, The Verse is talking about those who reject God’s message and do not obey God. Obviously these people ultimately reject God’s love, Quran 3:31-32:

Say, [O Muhammad], "If you should love Allah, then follow me, [so] Allah will love you and forgive you your sins. And Allah is Forgiving and Merciful."

Say, "Obey Allah and the Messenger." But if they turn away - then indeed, Allah does not like the disbelievers.

Christians believe the same thing with respect to their tradition. Those who reject the message of God, effectively reject God and are ultimately cut off from the love of God. This has been outlined in the Bible verses we have presented previously. To re-emphasise this we can additionally cite Romans 1:18 which is essentially teaching the same thing as Quran 3:32 with respect to the Christian tradition

The wrath of God is being revealed from heaven against all the godlessness and wickedness of people, who suppress the truth by their wickedness [Romans 1:18]

Again, even if you did not have access to the Bible, the fair-minded Christian would conclude the same thing as Quran 3:32 with respect to Christianity by thinking about the doctrine of hell. Why else do Christians believe disbelievers go to hell if it is not for the rejection of God and ultimately the rejection of God’s love?

RC Sproul in his criticism of Christians who preach unconditional love explains the motivation behind their thinking: “We want to so much win people to Christ that we’ll do everything we can to hide from them the wrath of God”

Driscoll’s candid admission explains why folks at small Westernised evangelical outfits preach the way they do. It’s because their churches are afraid of speaking about the wrath of God for the fear of losing congregants, potential new members and donations. They are essentially being told what they want to hear. Driscoll sums this attitude up by mentioning the Old Testament:

The prophets prophesy falsely, and the priests bear rule by their means; and my people love to have it so: and what will ye do in the end thereof? Jeremiah 5:31

Theologian John McArthur says “preaching that God loves you unconditionally is the wrong message. The sinner needs to be terrified about his condition”.

Jesus and the Sword

Tooting’s St Nicholas Church’s Elizabeth Schofield has taken to telling Muslims that Jesus will come for them with a sword if they don’t worship him (a man!). How can you truly believes Jesus loves everyone when you believe he will come back with a sword for those who do not want to worship Jesus ( man!) and then ultimately put them in Hell for eternity?

In addition, CJ Davis and St Nicholas Church in Tooting, on paper, accept the Thirty Nine articles derived from Thomas Cranmer’s Forty Two Articles which not only talk about hell but also teach that God chose the believers (saved ones) before time (predestination). For academic honesty, this does not necessarily mean Calvinism’s Unconditional Election but it does seem to leave the door open for that theology to be a valid theological view within the CoE paradigm. How do St Nicholas Church folks who endorse or are part of DCCI Ministries parse this part of their teaching as well as the belief that Jesus will come back in condemnatory judgement for the unbelievers - do they think these views are consistent with the idea expressed in the social media post that Jesus loves unbelievers?

For God so loved the world that he gave his one and only Son, that whoever believes in him shall not perish but have eternal life.[John 3:16]

But God demonstrates his own love for us in this: While we were still sinners, Christ died for us. [Romans 5:8]

These verses are not about universal salvation, they simply express the idea that God offered mankind a way for salvation. Christians do not believe everyone will have eternal life, Christians (with a focus o Arminianism) believe God has offered mankind a route to salvation and it is ultimately down to people to decide to accept this offer of salvation (i.e. via the killing of Jesus for their sins). 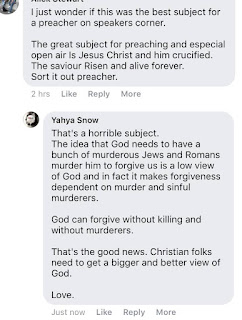 Islam has the same general teaching in that God (Allah) offers a route to salvation to mankind. He sent messengers to every nation so people can know God personally, worship Him and obey Him in a relation of love with Allah. In Islam as well as Judaism, God is perfectly forgiving so does not need to have somebody or Himself killed in order to forgive us. The final message and route for salvation God (Allah) gives to humankind is Islam – those who accept the message to submit their will to God will be those who are saved. Interestingly, this message of submitting to God’s will seems to be presented in a purported quote of Jesus in Mark 3:35 too

35 Whoever does God’s will is my brother and sister and mother.”

Once we scrape away the emotional harrumphs and fluff certain, unhelpful, Christians add to proceedings we see very much that in Islam, God loves the world enough to offer mankind a way to Him. Likewise, the same is taught with respect to the Christian tradition in John 3:16.

Now you know all this, you (the truth-seeker) can start to look deeply into both religions and decide which one carries more truth.

I think it’s counterproductive for anybody who believes in Heaven and Hell to state God loves everyone (unconditionally) and condemn teachings of other faiths which teach the view that is compatible with common reasoning, that God does not love unbelievers (why else would He put them in hell for eternity?).

Do you really think TCVO Jesus loved those he ordered to be killed in 1 Samuel 15:3?

Come on DCCI and Tooting’s St Nicholas Church folks, you’re looking contradictory. My advice to DCCI Ministries, move beyond shallow and inconsistent polemics – you do not honour Paul of Tarsus, your churches or even sound reason. You simply serve to get people’s backs up and ultimately become an obstacle to sound dialogue between Christians and Muslims

How Jay Smith, Nabeel Qureshi, Sam Shamoun and David Wood Contribute to the Apostasy of Christians

Slovakians converting to Islam
Did Peter Believe in the Trinity?

Why Islam
Christians having dreams and converting to Islam
Sharia Law against terrorism
Posted by Yahya Snow at 14:42