Book Review: Jesus, the Fake Jihadis & Evangelical Christians by Muhammad Asad (A Response to 'Jesus and the Jihadis')


After reading this book  I came away with the realisation Craig Evans and Jeremiah Johnston really did a disservice to their community and their reputations through their approach which was demonstrated by Muhammad Asad to be unscholarly, inconsistent, unfair and in places outright dishonest. 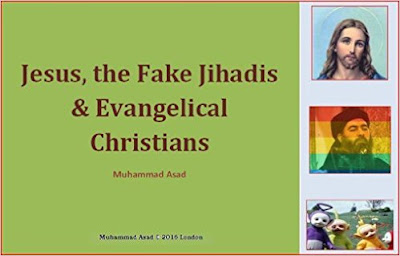 Before reading Muhammad Asad's book 'Jesus and the Fake Jihadis', I would suggest you listen to the radio debate to familiarise yourself with the overall theme and some of the specifics coming from Craig Evans and Jeremiah Johnston.


Muhammad Asad's book is not just confined to those who are aware of Craig Evans and Jeremiah Johnston's book but rather it's also useful for Muslims and Non-Muslims who are involved in anti-Islamophobia and anti-ISIS activism. For Muslim apologists, it's a good resource; especially considering the focus on ISIS in the media and what appears to be a trend amongst critics of Islam in penning books and articles contending the terrorist group ISIS (Daesh) as well as others such as Al-Qaeda and Boko Haram are following Islam to the letter.

As a Muslim, I'd like to see more of this stuff from Muslim authors - writing books directly responding to books criticising Islam. I hope Muslims will encourage the author, Muhammad Asad, and support his work. He clearly put a lot of time and research in to this work. You can purchase hisbook Jesus, the Fake Jiadis and Evangelical Christians here.


My overview and notes on 'Jesus, the Fake Jihadis and Evangelical Christians' by Muhammad Asad


The book 'Jesus and the Jihadis' is denounced as "a propaganda styled assault upon Islam".


Muhamad Asad ties in the approach of Craig A. Evans and Jeremiah J. Johnston with that of Martin Luther's approach to Islam which was to malign Islam as a shameful faith and simultaneously (as odd as it sounds) to strengthen Christians in their faith.


The last point from this introduction that sticks out, Asad makes a telling point impugning Craig Evans - if Evans had shown the same diligence and scholarly acumen as he does for his work on Christianity he would not have come to such a propagandized hit-piece.


- Malice in the polemics


[I haven't read the book but I found the comments on the radio 'debate' to be hurtful and to be honest I found Johnston to be extremely offensive and came away with the opinion he was obnoxious.]


- Losing respect for Craig A. Evans


Interestingly, Asad draws a comparison between the way older evangelical scholars maligned Jews and Judaism in an effort to make drive home their positive view of Christianity.


Evangelical Trust in Daesh: All Muslims are Wrong and Daesh is right


The author states Daesh does not even make up 1% of the Muslim community.


In a nutshell, Evans and Johnston insist Daesh are right, in doing so they are essentially saying pretty much the whole of the global Islamic community including pretty much all the scholars are wrong.


[If you think about it...that's absurd. Nobody of any desire for fairness would grab such a minority view point and laud it over the overwhelming majority in any field]


The author gives a useful short survey of scholarly condemnation of Daesh (something for the 'where are the Muslim leaders to speak out against ?' brigade to look at).


"Like Daesh, Evans and Johnston also ignore the entirety of Islamic scholarship"


A brief run-down on interpretative tools for religious texts. The general principle is the same for the Bible and the Quran.


A question of consistency is asked of Evans and Johnston as the Hebrew Bible contains more violent passages than the Quran.


Muhammad Asad responds to comments from Craig Evans' radio 'debate' with appeals to common sense, context , consistency and through error-correction.


Amongst other useful information in this section there's a deft response to the standard evangelical dismissal of the Quran because the New Testament came earlier and a scholarly discussion on the idea of the divinity of Jesus, the NT as eye-witness testimony, the historical Jesus as well as the reliability of John's Gospel.


There's also something for the 'where are the Muslims to fight ?' crowd in this section. 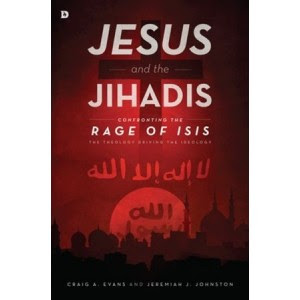 
Muhammad Asad engages with 's comments from the radio 'debate' by looking at the Quran, Hadith literature and scholarly opinions.


Here we see Jeremiah Johnston exposed as a liar for the following claims:


There's a good discussion on that age-old polemic of  'Muslims can't take non-Muslims as friends' in this chapter as well as a more realistic (less evangelical) analysis on love and hell in the Bible.

Asad continues to respond to 's radio comments and then moves the discussion on to Ayaan Hirsi Ali. Asad catches in another outrageous lie:


"there are over 100 verses in the Quran enjoining Muslims to fight, kill, torture, rape, pillage and conquer in the name of Allah against the kafir"


[As a side note - this propaganda claim of Muslims can rape is common in the deafening din of Islamophobia. Here are some Muslim scholarson rape]


Asad also addresses Jeremiah Johnston's strange assertion of 64% of the Quran being related to what to do with the non-Muslim world. Asad's investigation demonstrates "their statistical approach is completely unscholarly and, ridiculous to say the least" and "pure disinformation".


Muhammad Asad discusses the shock value claim of 200 references in Bukhari relating to Jihad [something which I thought was well addressed by the Muslim panel in the radio debate] as well as 's appeal to Ayaan Hirsi Ali. Here's a snip from Asad which just highlights the foolhardy attitude of :


"Ayaan Hirsi Ali is to be believed but Shaykh Muhammad al Yaqoubi, Dr Tahir ul-Qadri, the Grand Mufti of Saudi Arabia, the Shia religious auhorities, the thousand plus Indian Muslim ulema...are not to be believed."


There's some symmetry here, , whom Asad shows to be a liar, appeals to Ayaan Hirsi Ali, who in turn, Asad points out to be a proven and documented liar.


Muhammad Asad finishes off responding to 's radio claims. This section includes a dissection of Bill Warner's contention that 132,315 words in Bukhari are devoted to Jihad. The faulty methodology of Bill Warner's study is explained.


An appeal to consistency is made as Johnston and Evans are demonstrably using different standards for the Hebrew Bible and Islamic Texts.


Islamic Eschatological beliefs are discussed including a fascinating narration by Ali Ibn Abi Talib (ra) concerning the possible foretelling of a group close to the end of times which appears to fit the description of Daesh. Asad then moves on to Christian eschatology.


's contentions on the growth of the nascent Islamic community are repudiated and 's flawed thinking comes to the fore when it comes to conversions to and from Islam in more recent times.

7. "Condemning the Jews" in Scripture


This chapter focuses on the Christian and Islamic view of Jews. Asad points out some possible cognitive dissonance on the part of Evans and Johnston; both admire Martin Luther and both express an opposition to anti-semitism yet Martin Luther was drenched in anti-Jewish sentiment.


Asad illustrates the consistent theme of disingenuous citing from the Quran on the part of Evans and Johnston in discussing the treatment of Jews. Asad goes through a number of different Verses which the two Christian authors misrepresented and suitably he rebukes them:


"Leaving aside , we know that Evans is a vigorously trained scholar. Had he investigated even minute scholarship to investigate the above passages, it is highly unlikely that he would have made such an argument. Unfortunately, for polemical motivations, Evans appears to have ditched sound principles of scholarship for good when commenting upon Muslim sources."


Muhammad Asad presents an interesting overview of an Egyptian terrorist group responsible for terrorism in the 80s and 90s including the assassination of Anwar Sadat. This group renounced violence after a careful analysis and reflection on Islamic texts. They have took to preaching against terrorism.


9. Sources of the Quran


Muhammad Asad thoroughly addresses the old 'borrowing' polemic after looking at the scholarly field of source-criticism pertaining to Christian texts.

Muslim Scholar on ISIS and the Jordanian Pilot

Why isn't ISIS a Caliphate?