Jay Smith of Pfander Centre for Apologetics  made the claim of Muslims banning ham in Harrow. Harrow is an area in London of 200,000 people.

Jay Smith got caught out on this. He got mocked online and was confronted in person over his claims to the amusement of his colleague Lizzie Schofield. I think Justin Brierley of Premier Christian radio was notified about hamgate too. 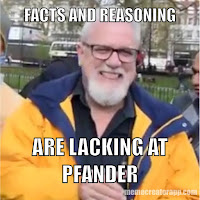 Jay Smith, being the man of self-preservation he is, jamp on camera and claimed to have been using “hyperbole”. Guess he must have thought Christians will just believe him by accepting his words uncritically. Jay Smith, there are smart Christians out there who will feel uneasy with your “hyperbole” explanation. Remember, you’re not only talking to people who are part of your group and presumably receive wages from your organisation or asylum seekers who have converted to (or pretended to convert to) Christianity to help with their asylum stay in Europe who presumably don’t have a clue what Harrow is or are worried they will get sent back to Iraq to be bombed by other Iraqis or by Christian nations like America.

I hope those other Christians do have a word with you.

As for his “hyperbole” claims, they don’t compute with what he actually said. Smith made the claim he cannot get ham anymore in Jarrow because Muslims/Islam banned it.

He’s now back-tracked claiming he was only talking about a local Subway. Hmmm, OK, why didn’t you just say it was one store near you in the first place (if that was the actual case)?!

But having said that, if you search Subway's store-finder you’ll see there are Subway outlets in that area search which do serve ham (i.e. they are not halal). I did call a few of the branches that came up after searching for “Harrow”. Some did sell ham and others didn’t . You can see from the search results which are halal and which are not halal.

Not only this, the biggest claim of them all is that which breeds resentment amongst the far-right and fires bigots up to even attack Muslims. It’s the claim that Muslims have banned ham.

This again, is just not true. Smith has a habit of making statements that just aren’t true.

A spokesperson for Subway said the halal-only stores reflect the diversity of Subway customers. [Plymouth Herald]

Subway are on record indicating they choose which stores are halal-only based on the demographic:

“We put a programme into place in 2007 to ensure that the population demographic is taken into account when new store openings are considered in order that we meet consumer demand in each location. [Plymouth Herald]

As the Plymouth Herald points out none of the branches in Plymouth are going to become halal because there are only about 2000 Muslims in Plymouth according to the 2011 census.

It’s business sense from Subway. Subway aren’t being forced by Muslims to do this. Subway has simply targeted Muslim custom by making some branches in areas populated with more Muslims halal-only. The hate preacher Jay Smith can surely see this or is he so self-radicalised that he cannot see how wild-eyed he comes off as? 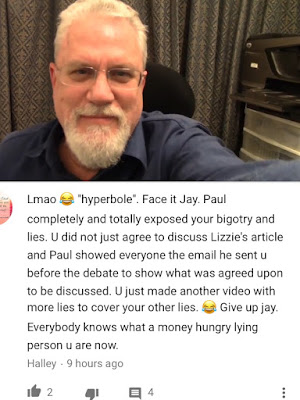 Let me get this straight, Jay Smith, if not lying (or perhaps in his vernacular using “hyperbole”), has a local Subway which is halal-only. He’s upset about this. What do you want that Subway to do? They are probably competing with a load of halal takeaways and other food outlets etc. in an area packed with Muslims. Do you want them to not try and get their custom and thus probably fold (meaning people lose their jobs!) or do you want them to try and get Muslim custom?

And why in the world are you, a bloke who “expects” to be killed by Muslims someday, living amongst so many Muslims? Perhaps you’re just lying about your locality and you don't actually live in a highly Muslim area where there is a halal-only Subway – I wouldn’t rule that out. Lizzie Schofield, Sarah Foster or Beth Grove can you help us out?

Does your Bible* not teach double minded men are unstable in all their ways? See James 1:8

Oh Jay would you like to go on record and claim you were using “hyperbole” when you claimed a crowd of Muslims (40/50) told you they will kill you at Hyde Park Speakers Corner? And how about that nutty Petra conspiracy theory stuff you come out with, is that “hyperbole” too?

*In case you’re wondering what the Bible is Jay, it’s the book you lost confidence in a looong time ago, I suspect you used have confidence in it being inerrant in your early years. Perhaps this is behind your antagonism and resentment towards Islam and Muslims, your dialogue with Muslims made you see your fundamentalist Christian views were false. Am I reading you like a book, Jay?

How Jay Smith, Beth Grove, Usama Dakdok and David Wood contribute to the apostasy of Christians