This was a testament to the inconsistent way in which minimalists in the apologetics community argue, specifically minimalists who rely on Dr Mike Licona.

Dr Andy Bannister shared his Solas video on the resurrection story on a FB group:

Did Jesus really rise from the dead? The story of Jesus’ resurrection is central to Christianity but few people are aware that there are powerful historical reasons for believing in it. This Easter, perhaps the choice isn’t lazy skepticism or blind faith, but faith in the Jesus of history. This latest SHORT/ANSWERS episode will help you see Easter in a fresh light 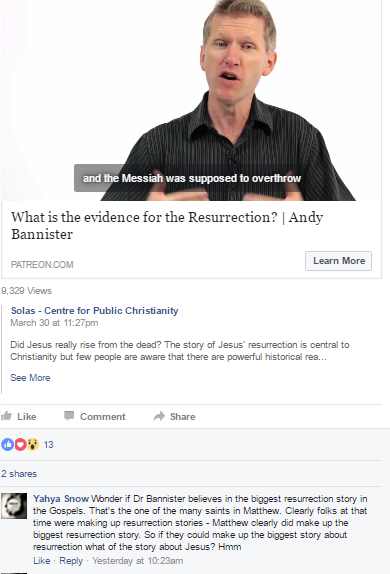 My response to Dr Bannister was to probe his views on the biggest resurrection story in the Gospels (that of the many saints in Matthew):

Dr Andy Bannister’s response was polite enough but he did fall in to obvious inconsistency by picking on my use of Prof Geza Vermes and describing it as inconsistent as I don’t agree with all of the late Prof. Vermes’views.

Thanks, Yahya. In return, perhaps I should ask if you agree with Muslim scholar Tarif Khalidi that the Qur'an's presentation of Jesus is "non-historical" and "not historical, but an argument" — see Khalidi's excellent little book "The Muslim Jesus". On the issue above, have a read of Mike Licona's massive https://www.amazon.com/Resurrection-Jesus.../dp/0830827196 — it covers the issues you raise among others. (I'm intrigued to find you recommending Geza Vermes, given the implications of what he argues for the Islamic view of things ... you wouldn't be cherry-picking, now, would you? 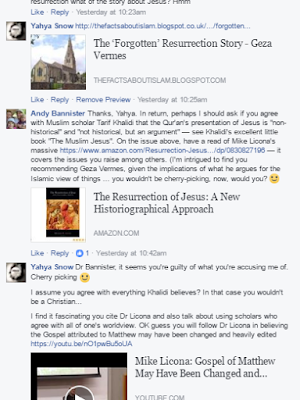 Now, this notion that anybody you cite must agree with everything you believe is a fallacy. Nobody holds to this notion – it’s simply an apologetics stick to try and beat one’s opponent with. Even Christians like Dr Bannister don’t hold to it when they quote their Bible: Jesus and Paul didn’t believe in the Trinity so I guess Dr Bannister will not be quoting any purported words of such men. However, Dr Bannister cites Dr Mike Licona which puts Dr Bannister’s position in hot water as Dr Mike Licona has some very interesting views which I’d love to hear whether Dr Bannister agrees with Dr Licona:

Dr Bannister, it seems you're guilty of what you're accusing me of. Cherry picking

I assume you agree with everything Khalidi believes? In that case you wouldn't be a Christian...

I find it fascinating you cite Dr Licona and also talk about using scholars who agree with all of one's worldview. OK guess you will follow Dr Licona in believing the Gospel attributed to Matthew may have been changed and heavily edited https://youtu.be/nO1pwBu5oUA 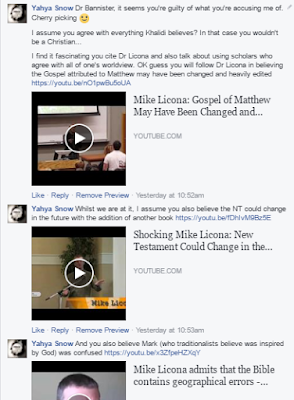 Whilst we are at it, I assume you also believe the NT could change in the future with the addition of another book https://youtu.be/fDhIvM9Bz5E

And you also believe Mark (who traditionalists believe was inspired by God) was confused https://youtu.be/x3ZfpeHZXqY 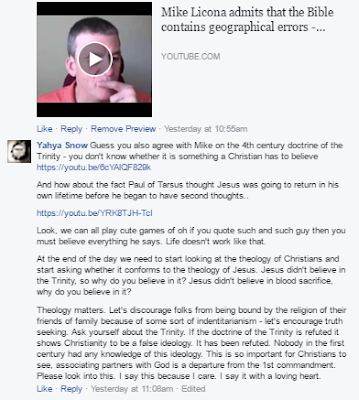 Guess you also agree with Mike on the 4th century doctrine of the Trinity - you don't know whether it is something a Christian has to believe https://youtu.be/6cYAlQF829k

And how about the fact Paul of Tarsus thought Jesus was going to return in his own lifetime before he began to have second thoughts..

Look, we can all play cute games of oh if you quote such and such guy then you must believe everything he says. Life doesn't work like that.

Theology matters. Let's discourage folks from being bound by the religion of their friends of family because of some sort of indentitarianism - let's encourage truth seeking. Ask yourself about the Trinity. If the doctrine of the Trinity is refuted it shows Christianity to be a false ideology. It has been refuted. Nobody in the first century had any knowledge of this ideology. This is so important for Christians to see, associating partners with God is a departure from the 1st commandment. Please look into this. I say this because I care. I say it with a loving heart.

Did Ignatius Teach the Trinity?