I had a quick YouTube exchange which started off with a gentleman, who I assume to be Swedish, talking aggressively about Muslims. 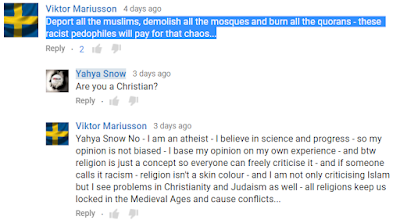 Here's the exchange. It was rushed but it does go to show that some aggressive comments towards Muslims are cries from the commenter for a Muslim to interact with them. We can use these as opportunities for Dawah (preaching Islam) and to build community cohesion and relationships between Muslims and Non-Muslims. What you should not do is get into an angry slanging match with them - it does not help anybody.

VM: Deport all the muslims, demolish all the mosques and burn all the quorans - these racist pedophiles will pay for that chaos...﻿

Me: Are you a Christian?﻿

VM: Yahya Snow No - I am an atheist - I believe in science and progress - so my opinion is not biased - I base my opinion on my own experience - and btw religion is just a concept so everyone can freely criticise it - and if someone calls it racism - religion isn't a skin colour - and I am not only criticising Islam but I see problems in Christianity and Judaism as well - all religions keep us locked in the Medieval Ages and cause conflicts...﻿

Me: As Muslims we believe in science and progress too. There are fundamental problems with Atheism. Atheism leads to an ideology which means there are no objective moral standards. And if the Atheist is a materialistic emotions like love as well as other humans are simply a collection of chemical reactions and molecules. This worldview cannot value life in the same way a religious worldview can. Look into the philosophical arguments for God such as the cosmological argument, teleological argument and the argument from morality. Right now my Viktor, you and I cannot converse about Islam as Islam makes more sense when one actually believes in God and thus can be explained easier. As for terrorism, the Sharia (Islamic law) forbids terrorism so acts like suicide bombing and this recent one targeting innocent people at London Bridge are seen as sinful and unjust acts. My email: yahyasnow@yahoo.co.uk. Have a good night/day. Take care, God bless. Love.﻿

VM: Yahya Snow I don't actually completely reject the fact that the God or higher power (existence) exist - there are many things that we cannot explain yet and I have my own morality, but I think that people are too dependent on religion and use it as a reson for everything and mixing it to everything (like politics) - like extremists who use Allah as the reason why they are killing and beheading...(and I heard that a girl was stoned for burning Quoran) - it also divides people and trigger conflicts - and leads to discrimination and sometimes violence - and 👈THAT's not going to make us progress and become a 'modern' society. It's good that there is a diversity in religions and everyone has his/her own believes but every religion has its disadvantages and advantages and when people take it too far like the people in the video - it's a bit sad and frustrating...and after the refugee crisis it has strengthen...you should also understand me - Muslim gangs are burning cars (sometimes a couple nights in a row) and I see police every day by my house, in a neighbourhood that was very peaceful and calm before...and there was a woman who was raped by a Muslim but he was sent home because he used Islam and Allah as a reason and everyone here consider criticising Islam as racism and the government and police are not defending 'non-muslims' - maybe now you understand why I am so angry...﻿

Me: Viktor, race and even atheism divides people. That's not a reason to reject a religion - by it's very nature that religion is meant to divide as it is saying there's one truth. Truth is absolutist not relativist. There's only one theology that is correct. You're talking about Muslims doing bad stuff in your area. OK, yes, there are Muslims that do bad...that's not because of the religion. The religion does not tell them to burn cares, rape etc.. Look, I understand why you're angry, yes parts of Europe have been affected violently by people self-designating as "Muslims". But if you look into all the crimes in your country I guarantee you will find crimes committed by people of various faiths - the majority will be by secularists or Christians in your country (I assume you're in Sweden). Like I say, look into the arguments for God and then give Islam a chance brother. Have you read the Quran, if you have not try reading it. You can get Swedish translations and English translations (whichever is best for you). Anyways, I have to go, all the best. Take care. May Allah bless you further. Love. 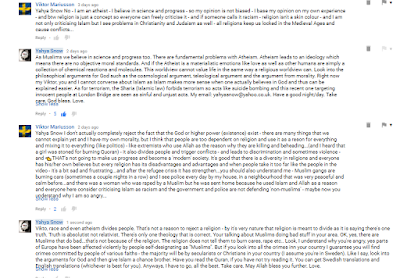 Why it's Important for Muslims to Continually Condemn Terrorism