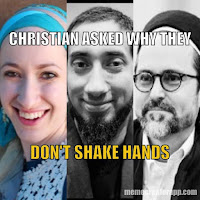 This issue may be brought up in the media or by non-Muslim individuals in the West who consider it to be odd. It's the issue of Muslims not shaking hand with strangers of the opposite sex. Our Jewish friends follow the same practice. They call it Shomer Negiah and they say it goes back to the Bible.

This vide is also uploaded here and here