Asghar Bukhari writes on his FB about his experience with a Nigerian Christian:

I met a Nigerian Christian today. Well somehow [the] conversation turns to Jews backing israel. He starts telling me the Bible says God supports Jews against their enemies.

So i say, hang about. Didnt they kill your God?

He replies yes but that was Prophesy. God ordained it. And if God hadn't died he wouldn't be saved.

So i say, 'So God told them to kill Him? So you think they did God a favour by killing Him?

He actually said "Yes its Good they killed God"

African Christians are some of the most brainwashed people on earth. I mean how can you believe in a religion that nuts.

I have actually thought about this before, I don't believe this Nigerian Christian has drifted away from Biblical Christianity in what he said with what he said about Jews killing God.Christians do effectively believe God wanted the Jews and Romans to kill him - it was a prerequisite for salvation. Thus, in some way without these murderers this “gift of salvation” Christians believe in could not happen.

I've always thought why aren't those who are said to kill Jesus not considered saints as they are responsible for the salvation of billions indirectly according to Christianity? How can they be considered to be in Hell when every Christian is indebted to them indirectly for their salvation?

In Islam, God can forgive people without having to be killed by murderers. Which concept of God is better, the Christian one or the Islamic one, be honest?

There are some tough questions here, think about them and ask your pastors. 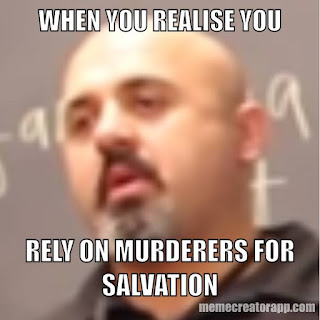 Note: A Christian friend, Denis Giron, did share this from the Catholic tradition: Catholic history has a tradition that the Roman soldier who stabbed Christ with the spear was a man named Longinus, who later converted to Christianity. He was (and in some pockets still is) revered as a saint. Admittedly, he was revered based on the belief that he converted..


Synoptic Gospels and the Idea of a Pre-Existant Jesus?