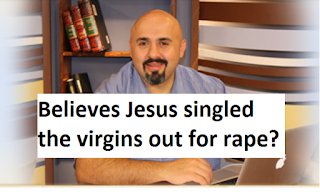 Now I understand this anti-Islam apologist, Sam Shamoun, has been denounced as having a double-mind by Pulpit and Pen and James White refuses to recommend him whilst considering him as somebody who "has lost it" BUT his views, if consistently applied, seem to indicate he believes Jesus singled out virgins in Numbers 31 to be raped.

This video is also uploaded here

4 Moses was angry with the officers of the army—the commanders of thousands and commanders of hundreds—who returned from the battle. 15 “Have you allowed all the women to live?” he asked them. 16 “They were the ones who followed Balaam’s advice and enticed the Israelites to be unfaithful to the Lord in the Peor incident, so that a plague struck the Lord’s people. 17 Now kill all the boys. And kill every woman who has slept with a man, 18 but save for yourselves every girl who has never slept with a man.
Deuteronomy 21:

10 “When you go out to war against your enemies, and the Lord your God gives them into your hand and you take them captive, 11 and you see among the captives a beautiful woman, and you desire to take her to be your wife, 12 and you bring her home to your house, she shall shave her head and pare her nails. 13 And she shall take off the clothes in which she was captured and shall remain in your house and lament her father and her mother a full month. After that you may go in to her and be her husband, and she shall be your wife.
A Difficulty On the Christian Idea of Salvation and Forgiveness