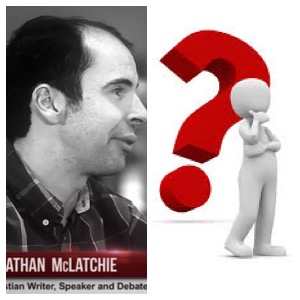 Jonathan McLatchie makes a noteworthy admission and argument which Muslims who argue for Prophet Muhammad being in the Old Testament (Hebrew Bible/Tanakh) will be interested in.

Jon acknowledges the Messianic prophecy claims conservative Christians preach are not direct prophecies but what he would consider allegorical, “foreshadows” or “typologies” (although he does think there are some direct prophecies). An example he cites is Hosea 11:1 which the author of Matthew 2:15 believed to be a prophecy of Jesus:

When Israel was a child, I loved him, and out of Egypt I called my son. 2 But the more they were called, the more they went away from me. They sacrificed to the Baals and they burned incense to images. [Hosea 11:1]

Jonathan recognises upon “inspection of the first two verses of Hosea 11, however, reveals that the context is not Messianic at all!”

Jonathan, however, does accept it as a prophecy. A typological prophecy:

What is going on here, one might ask? Is Matthew attempting to pull the wool over our eyes and dupe us into thinking that this is a prediction of the Messiah, earnestly hoping that his readers will not take the trouble to look up the text for themselves? Of course not. Rather, Matthew takes this text to be fulfilled typologically.

But, here’s the thing: if this is your standard and you accept this as a prophecy then you don’t have any reason to reject Zakir Hussain’s arguments for prophecies about Prophet Muhammad p in the Old Testament (and the New Testament) if your consistent. Really, just have a look at Zakir Hussain's arguments and you’ll notice that they are much more convincing than Matthew’s “prophecy” claim.

Based on a cumulative argument of “typological coincidences” of this nature, Jonathan argues it points to divine orchestration:

The numerous typological 'coincidences', of which but a few examples are briefly described above, militates strongly against hypothesis (2). The occurrence of so many correspondences between Jesus' life as reported by the gospels and the Hebrew Scriptures surely can only either be the product of divine orchestration, or human design in the telling of the stories

But hold on, a Muslim could make the same case for Zakir Hussain’s arguments!

Bart Ehrman sums up the situation around Messianic prophecy claims:

You can go through virtually all the alleged messianic prophecies that point to Jesus and show the same things: either the “prophecies” were not actually predictions of the future messiah (and were never taken that way before Christians came along) or the facts of Jesus’ life that are said to have fulfilled these predictions are not actually facts of Jesus’ life. [Bart Ehrman]

My point, thus far, is to highlight the manner in which Christians argue against proponents of prophecies for Prophet Muhammad in the OT is utterly inconsistent. If they were consistent in their rejection of those arguments for Prophet Muhammad in the OT they would reject the allegorical approach they accept for Messianic prophecies; that would be bye-bye to Matthew’s alleged Messianic prophecy leaning on Hosea 11:1.

However, the elephant in the room is that of making up prophecies or being overly keen to find prophecies and ending up with claims that are just baffling. Firstly, we know the author/s of the Gospel of John changed stories for theological reasons (i.e. the day of the crucifixion story). We’ve also got the spear thrust story in John and the story of the guard in Matthew which aren’t considered to be historical – those narratives would have been added for theological/apologetical reasons.

But seen as Jonathan is solely focussing on prophecies let’s focus on Matthew's prophecy claims. Jonathan McLatchie doesn’t want people to believe “the gospel authors deliberately set out to deceive and mislead people into believing their accounts to be recalling real history” but the author/s of Matthew seem/s to be making up prophecies or at the very least being victim/s of some of the source material used to compose the Gospel.

One example would be the use of Zech 9:9 in Matthew 21 where the author depicts Jesus riding on a donkey and a colt:

The Hebrew text for this Old Testament prophecy talks about one animal which is described twice, but its Greek translation uses “and”, meaning two animals instead. Matthew relied on the Greek translation of the Old Testament so he made Jesus ride on two animals. He had to change the earlier part of the story to make Jesus order his two disciples to bring a donkey and a colt. The fact that Jesus could not have ridden on two animals at the same time did not bother Matthew! [Dr Loauy Fatoohi]

And the claim of a prophecy of one to be called a “Nazarene” in Matt 2:

Like other prophecies quoted by Mathew, there is a serious problem with this prophecy: it does not occur anywhere in the Old Testament! [Dr Louay Fatoohi]

Perhaps another example for the notion the Gospel authors were shaping their narratives on their interpretation of the Scriptures (the OT) would be the narrative of Jesus being born in Bethlehem:

But the authors of the Gospels were themselves influenced in their telling of Jesus’ story by the passages of Scripture that they took to be messianic predictions, and they told their stories in the light of those passages.

Take Jesus’ birth in Bethlehem. A couple of times on the blog I’ve talked about how problematic it is to think that this is a historical datum. It’s true that both Matthew and Luke say that Jesus was born in that small village. But Mark and John do not assume that this is true, but rather that he came from Galilee, from the village of Nazareth. Moreover, Matthew and Luke *get* Jesus born in Bethlehem in radically different and contradictory ways, so that for both of them he is born there even though he comes from Nazareth. Why don’t they have a consistent account of the matter?

It is almost certainly because they both want to be able to claim that his birth was in Bethlehem, even though both of them know for a fact he did not come from Bethlehem, but from Nazareth. Then why do Matthew and Luke want to argue (in different ways) that he was born in Bethlehem? It is because in their view — based on the Old Testament prophet Micah 5:2 — that’s where the messiah had to come from. And so for them, Jesus *had* to come from there. They aren’t recording a historical datum from Jesus’ life; they are writing accounts that are influenced by the Old Testament precisely to show that Jesus fulfilled the Old Testament. [Bart Ehrman]

Does Jonathan McLatchie Believe the Bible Teaches a Flat Earth?