Muslims need to be aware of how the “Christian Persecution Complex” (CPC) can get in the way of fruitful dialogue with Christians. 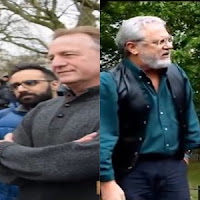 A tale of two American Christians

In this video the American Christian missionary from the Pfander Centre for Apologetics, Jay Smith, has lapped up the persecution narrative and self-radicalised himself about Muslims so much so that he proclaims he “expects” to be killed by Muslims one day.

When one has that type of mindset they will never be able to have a meaningful dialogue with a Muslim. The dialogue will always be a pretext for the Christian suffering from CPC to use the interaction with the Muslim to bolster their CPC. This may come in the form of subtle condescension or offensive polemics to provoke a reaction or an emotion from the Muslim.

For this Christian, Muslims feeling resentment or hatred towards and verbally abusing him is seen as “persecution”.

If the video does not play, this video is uploaded here and here

On Bible verses teaching the followers of Jesus will be hated (such as Matthew 10:22 and 24:9), pastor Bob Beeman says “It seems to give Christians the opportunity to act stupid and justify it”
“...Many times when we do stupid things, do stupid things, when we antagonise people around us and when we act in any other way but lovingly to those around us and they respond like human beings do and get upset with us, we say, well, the Bible says I will be persecuted and you know it’s just [that] I’m I’ being persecuted for the Lord. No folks, many times you’re being persecuted because you’re acting stupid”

On the other hand this American Christian was able to conduct a meaningful and polite dialogue with a Muslim which viewers commended him for.

I appreciate that he is listening and not interrupting unlike some crazy Christians at the same time, putting forward his Christian view point across without any hostility...﻿

I enjoyed this discussion a lot. The American man seems like a nice genuine sincere person who actually listens and can tell he will reflect and research his own scripture and beliefs. I hope he sees the truth and light that is Islam. God bless
﻿
Good Christian man.
﻿
first time i seen a christian listen
﻿
Putting all this down to CPC or the lack of it is simplistic but I'd hazard the guess that CPC really doesn't help Christian-Muslim dialogue. Well, actually it does help break the dialogue down and increasing division. Prof. Francesca Stavrakopoulou is right, Christians in the West are not being "persecuted". I'd advise folks like Jay Smith and Beth Grove to think about this.