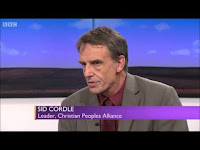 Here's an interview I did with Sid Cordle of the Christian Peoples Alliance.

1. What is the aim of the Christian Peoples Alliance?

Government. But in the meantime to stand for righteousness and holiness and Christian values and see them promoted

2. I know it’s extremely unlikely but if there was a seismic shift on the British political landscape and your party was elected into government would we see Britain led under Christian teachings? For instance would you ban: sex outside marriage, homosexual marriage, gay clubs, strip clubs, betting shops, casinos, pornography, blasphemy and abortion?

We believe in freedom but we would promote good activities like faithfulness in marriage and remove Government subsidies from all immoral activity. We want open debates on what is right and what is wrong.

3. If you would/wouldn’t ban all those anti-Christian actions, what’s your reasoning for your decision?

I've said we believe in freedom. People have to make their own choices but we promote good, we don’t force it on people.

4. Correct me if I’m wrong but from what I gather your party is pro-Brexit, why is that?

1. The EU is anti democratic. The Commission which runs Europe is not elected. The European Parliament and Council of Ministers can only agree or disagree with the commission.

3. Abuse of human rights. We believe human rights is about freedom. The EU has made it about the right to abortion, same sex marriage assisted dying etc . which is wrong.

4. Hidden agendas to subvert Government decisions bit by bit in an ever closer union to create a Unites States of Europe.

5. Is your party inclusive of all Christian groups, are Catholics and Jehovah Witnesses welcome to join and be embraced as Christians by your party?

Not Jehovas Witnesses. They don’t believein voting or any political activity but Catholics absolutely yes.

6. I did watch your appearance on the BBC’s Daily Politics show and I felt you were being set up here somewhat by springing you with past tweets that are deemed controversial in a secular society. What are your thoughts on that line of questioning and do you stand by your comments? Interview can be found here https://www.youtube.com/watch?v=iXUfZYjhWlw

The interview showed massive disrespect especially when Andrew Neill said " because God is gay..." He would never have said to a Muslim " Because Allah is gay..." He would have been scared to have been attacked on the spot. I don’t mind aggressive fair questioning but I was asked to talk about the EU and they deliberately diverted the topic onto something else to try and make fun of me.

7. You did field a candidate in the Stoke by-election. How do you feel about the Labour win there and what are your thoughts on Paul Nuttall’s inability to win over the people of Stoke, is this yet another indication that UKIP is on the wane post the Brexit campaign ?

The Labour candidate was good but he won because of getting the votes of Muslims. The LIb Dems had a Muslim candidate but all the Muslims voted Labour . In one area they got 80% of the vote. They did this to get what they want from Labour. I thought Paul Nuttall was weak in the hustings and some of his policies were completely wrong, eg cancel overseas aid and just think about ourselves, supporting water boarding to get information from people. We didn’t do well but we made a lot of good contacts with the church leaders there and laid a good foundation for future campaigning in Stoke. Now onto Manchester Gorton. We are working within ourselves so we can move on rather than throwing everything into one campaign.

8. Britain and Europe is experiencing a rise in fascist and far-right groups which is precipitating a rise in Islamophobic attacks (attacks on mosques and Muslims as well as discrimination and abuse against Muslims), how would CPA propose to alleviate this concern?

Muslims are engaging in violence against Christians where they are in a majority far more than far right groups are attacking Muslims. What we stand for is open debate on the rights and wrongs of Christianity and Islam. We don’t want violence anywhere at all. We want debates on TV, in Universities and in schools so people can see Christianity is the truth and Islam is a false religion.The only hope for Islam is that people stay in ignorance of what it really stands for.

[Quite disappointed Sid didn't take this opportunity to denounce Islamophobia and suggest ways he and his colleagues will try to tackle it. I feel Sid Cordle really does need to chat with knowledgeable Muslims. Hopefully we can  organise a meeting with an imam or chats with Muslim apologists. I do feel this belief that Muslims are ignorant about what Islam really believes is totally unfair, has Sid ever considered the ignorance about Islam is at his end rather than at the end of over a billion Muslims who practice Islam in their everyday lives?]

9. What’s your view on Britain First? This is a group which has promoted itself with a Christian veneer at times. Although they aren’t a political party (yet!) are they not seen as competitors of CPA?

Britain First are a political party. They stood in the London elections and believe in violence to promote their ends and use violence. We do not under any circumstancces so we cannot support them and wouldn’t support them. Jesus was against all violence so they can call themselves Christian but they aren’t Christian. They are a competitor to the BNP and possibly UKIP but not the CPA. If people don’t see through them they could undermine Christianity but I think most people do see through them.

[To be fair to BF: I am not sure if they "believe in violence"]

No. We protested the mega mosque because it was not wanted by the local community some of whom we represented, did not fit with the local plan, did not have good enough access and was far too big for the site. In other words it flouted a whole series of planning rules and that is what the Labour Council recognised unanimously. All Mosques should follow planning rules. We believe in freedom but would remove the charitable status of Islam. Under us there would be no Government subsidy for Islam as there is now but we would not persecute Muslims like they persecute Christians in Muslim countries

11. Have CPA protested against the building/opening of strip clubs, casnos ,bookies, gay bars or the conversion of church buildings into pubs like the one at Muswell Hill?

Absolutely where ever they are brought to our attention.

12. What is CPA’s stance on foreign policy with regards to the current plight in the Middle East (including the situation in Israel-Palestine)? Does CPA support military intervention or is it a pacifist party as many Christians preach Christianity is pacifist?

We believe all focus should be on defence and never to attack ie . on Trident we want a missile shield and to develop the technology to divert missiles into the middle of the ocean so nuclear weapons become obsolete. In Syria and Iraq we ant the focus on safe havens to protect the people. Our main aim with IS would be to destroy them verbally by showing their paradise of virgins rivers of wine and loads if food doesnl ;t ecxist so all theursuicicde bombers are going to hell. Once this is clealry shown they will stop killing themselves and IS will collapse.

[NOTE: The vast majority of Muslims including myself oppose ISIS (Daesh) but Sid Cordle's claims of wanting to show Muslims the Muslim view of paradise is wrong would interest Muslim apologist - I suggest he gets in touch with Muslims who are apologetically aware and have chat with Muslims. I believe Muslim arguments for Islam outweigh Christian arguments for Christianity. I trust Sid Cordle and his Christian People's Alliance colleagues will see such after discussion with informed Muslims]

13. Lastly, you’re clearly a political party and want to influence governance of a country, how do you reconcile this with the notion many Christians preach of separation of Church and State?

That is a misunderstanding of what Jesus taught. We believe God is interested in every aspect of society, music, arts, sport, business, politics. There is nothing He doesn’t care about. The key for us is listening to God. If you can listen to God and get God's wisdom then the whole world should see the CPA has the best policies for the nation and for the world.