Right, a few days ago, on Friday the 24th of March, Lizzie Schofield of Jay Smith’s Pfander Centre for Apologetics alerted me to a video in which she claimed somebody simulated her being shot via special video effect:

Lizzie Schofield Yahya Snow Do you have any comment on this video? This video that accuses me of being from a 'hate group' while including a special effect of me being shot in the head?

As for her being part of a hate group, Pfander Ministries, I do believe Jay Smith and his group do regularly spew Islamophobic sentiment and comments but this is not a discussion for now.

Lizzie goes on to claim she has reported the video in question to the police and the Home Office (an organisation which deals with counter terrorism):

Lizzie Schofield I've reported it to the police and the home office.

My initial thoughts must have been, oh no we have an idiot on the loose who has literally simulated the shooting of someone, hence my comment:

Yahya Snow Lizzie no I don't agree with that video. I absolutely deplore any intimidation or anything immature that will leave somebody intimidated. Much less a mother and wife like yourself. I have a sense of respect for you and I recognise you to be he most willing person out of Smith's group to attempt to converse.
I will try to investigate it. It's certainly nothing to do with me.
PM me if you want to message in private. Will try to get back to you after doing some investigations. I've got a meeting right now. Promise to look into it ASAP and relay back to you. God bless.

However, after viewing what the fuss was about I didn't feel anybody was simulating shooting Lizzie or anybody else for that matter, I just recognised it to be a video effect that other debate channels feature such as Sa Neter TV and Titans TV. These channels regularly clip a few heated moments in the debate for the introduction of the video and have a fireball-type of effect to represent a fired up discussion or a flash point within the discussion. Thus I was confident the gentleman who made the video was not trying to intimidate Lizzie our anybody else:

Yahya Snow Lizzie, whilst waiting fir my colleagues to turn up I have just skimmed that video and I assume you were referencing the effects at the start of the video. I think you've misunderstood that effect, it is an imitation of what Kamal from Titans TV does at the beginning of his vids. Check his vids out. In turn i think he vipied from Sa Neter TV based in the US ft amateur street debates.
I am confident this had no ill intent behind it.

Lizzie Schofield There's no ambiguity. It's clearly designed to simulate me being shot in the back if the head. Are you seriously telling me he intended something else? A firework? Come on.

Yahya Snow Lizzie come on. I can hand on heart say this is not a simulation of some violent act. The guy has just copied those effects. Let me get in touch with him.

My confidence grew in this regard in my subsequent dialogues with the video maker. He was completely calm and went to the police station that night – I believe he went to two but they were closed (both in East London).

Yahya Snow Spoken to the guy and he's explained it too. He said he wanted to show it was a heated dialogue. Anyways I do feel it is an over reaction. I've told him to go into the police station himself.

I did get a few messages from the gentleman in question after he got in touch with the police over the weekend. I reported this back to Lizzie. Not only did the police consider it to be a laughable accusation they also found no record of a police report being filed.

Yahya Snow Hi Lizzie, I just got a few messages from the gentleman who made the video. He has been to the police station, the police laughed it off and actually thought one of the hate comments thought to be from a Pfander Ministries supporter in the comment section on YouTube was more serious than the video effect!

They did say there's no record of any police report filed - they could not find any such report. It's a good thing you didn't file a report as it would have just been wasting police time I assume. They also told him if it was a terrorism matter he would have received a knock on his door within a day or two so it doesn't look like the Home Office received a report either.
Anyways I do think that gentleman is too gentle as the police gave him the option to report the hateful comment by the Pfander supporter, he declined.

The message from the gentleman in question:

Ok the police laughed it off and they said there was no report that they can find on the system , and there is no way police will arrest me or something like that , they actually said the Cooke [he meant “comment”] the I showed them about me , that is more of a thing than my special Fx , and asked me do I want to make a report , I said no it's ok , as I know it's just hot air and I DNT want to make a big thing out it , and they said anything inciting hate etc Youtube etc have their on code of conducts and if they deem that its with in there guide line then it's ok and I got nothing to worry about .!!

[NOTE: to say Lizzie lied based on this will be unfair as she may have filed it at a local station etc. - she can explain whether she did or didn't file a report]

Here's a similar effect from Titans TV ( a channel which I do not recommend): 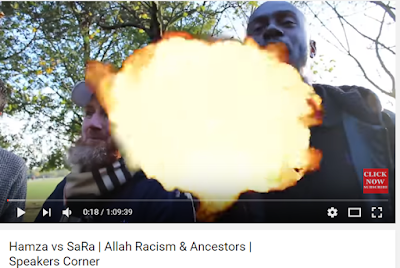 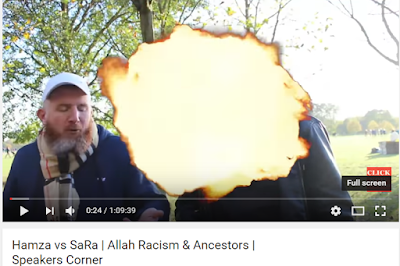 Are Hamza Myatt and SaRa going to lodge complaints to the police and claim Titans TV are simulating some sort of harm against them? Nope. They understand the video effect. This is the inception of the video effect before Lizzie enters the frame 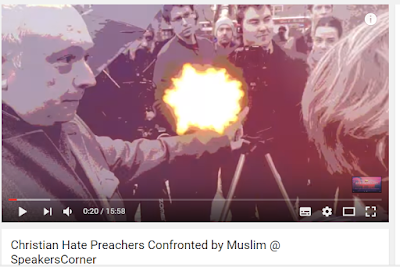 Now I understand Jay Smith attempts to radicalise and manipulate his followers by over-exaggerating the threat from Muslims. He is even on record saying he “expects to be killed by Muslims” someday and that Muslims are meant to kill him (and all Christians)! This is the Christian persecution complex, it’s delusional on the part of Pfander Ministries' Smith, Jay Smith has been operating amongst Muslims for decades in Africa and Europe. Nobody has killed him.

It gets more ironic as Lizzie in the video says “Muslims, I love you” while waving at some Muslims who are standing a matter of feet away, I found this to come across as infantilizing these Muslims which is completely in sync with the way Jay Smith regularly speaks to Muslims, the issue here is that it would be quite natural to assume the person who posted the video was one of the individuals who was only a matter of feet away from you (i.e. one of those who you claimed to love). Rather than jumping to the conclusion of your beloved threatening you by simulating you being shot why not hang fire (pun intended) and just get in touch with those who you love and ask them what the special effect signified as well as expressing any concerns you may have.

Isn’t that better than jumping to the most sinister and paranoid conclusion about a Muslim you just, a matter of days ago, told you loved. Not to mention then subsequently claiming you’ve reported him to the Home Office and the police (which seems to be a false claim unless evidence to the contrary crops up)?

I suspect Lizzie Schofield is more rattled at being accused of being part of a "hate group" hence her this saga.

This folks is the product of Jay Smith’s toxicity. Lizzie, I’ve been made to understand was a nicer and friendlier individual before joining Jay Smith’s and Beth Grove’s Pfander Centre for Apologetics.

Now I’m not entirely sure if it is an offence to claim you’ve reported something to the police while you have not. If it is an offence, I would strongly recommend folks do not report Lizzie Schofield. She has a family and it would be unfair on her family to put that type of stress on them.

I would put a lot of the blame of the big wigs at Pfander Centre for Apologetics. Jay Smith has a lot of explaining to do. Smith is a man who is near retirement, he’s made his money and he has no interest in proper employment for the future – he has nothing to lose in ratcheting up anti-Muslim and anti-Islam friction. He's not even planning on staying in Britain any longer despite his decades of sowing more division between Muslims and Christians in Britain!

I wouldn't be surprised if Jay Smith is looking to step things up to try and fulfil his “expectation” that Muslims will kill him. He’s and Islamophobe, Muslims should stay well away from him and certainly not allow themselves to be provoked into rash actions. He is a provocateur. Leave him be, nobody of a serious-mindset takes him serious. Neither should you!

Here's a video where the Islamophobe Jay Smith states he expects to be killed by Muslims. This explains the paranoia around Muslims from his followers - he drums it into them that Muslims want to kill him (and presumably them!)

Here's a video of more fear-mongering from Jay Smith of a similar nature in keeping with his attempts to instil paranoia into the minds of his followers concerning Muslims, he even claims Muslims are meant to kill him (and other Christians!) [2.10 time frame] https://www.youtube.com/watch?v=oMcdepFvYxo

Here's the video in question featuring Lizzie and the fire effect: