Recently I saw an article about the Indonesian actress' (Asmirandah Zantman's) conversion to Christianity on social media. It was being used as Christian missionary propaganda. 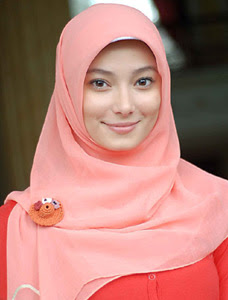 The article reporting on her 'conversion' to Christianity is dated the 3rd of November 2015 yet Wikipaedia suggests she married and converted to Protstantism (a denomination of Christianity) in 2013 so it's an old conversion yet it's given the veneer of being more recent.

Asmirandah is pictured wearing a hijab to reflect her faith prior to her 'conversion' to Christianity. Of course the Christian missionaries want to make out that Asmirandah was devout and converted to Christianity for a faithful reason.

However, in Indonesia mixed-faith couples; in order to obtain a marriage certificate must be of the same faith - thus one partner converts. Some choose to convert and live with their new religion like the actress Asmirandah seemingly has done while others only involve themselves in a 'conversion' in order to get a marriage certificate but then continue with their original religion. It appears her boyfriend did not want to convert to Islam so she converted Christianity - she appears to have chosen her boyfriend over her religion.
Christian missionaries, who are  attempting to use Asmirandah's 'conversion'  for Christian missionary purposes are either ignorant of her situation and her past or they are being deliberately disingenuous  in using her as a model 'convert'.

As for her being devout and a wearer of the hijab, she began her career without a hijab. She wore the hijab for a brief period. She confirmed a relationship with her boyfriend Jonas Rivanno (actor) in 2012 and got married in 2013 (see Wikipaedia).

So, it seems, to try and make out she was some devout Muslim lady who began to read the Bible and decided to convert because she thought Christianity was a true faith is misleading.

Oh and to the person who wrote she looks 'free' now (i.e. without the hijab), loosening one's modesty and wearing less clothing does not make one free. If that's your logic, then what of strippers..

In any case, how do you know Asmirandah is not a Muslim by heart or will not come back to Islam later on in her life or if she leaves her Christian husband?

My advice to Christians is stop using her for your Christian missionary propaganda. It's not clever. It's not sincere. And Christianity is the wrong path.


[QURAN MIRACLES] The Miracles of the Number 19 in Quran | Dr. Shabir Ally

Muslims Have Least Sex Outside of Marriage (Least Fornication and Adultery By Muslims)
Muslim women top in the battle against premarital sex: US Study
Christians having dreams and converting to Islam
Sharia Law against terrorism
Learn about Islam