This video has also been uploaded elsewhere, if this video does not play please see here

Strange story. There's no video evidence of this incident.

In fact Sheikh Deedat's son, who was asked about this, has denounced this as untrue. See the screenshot (click to enlarge): 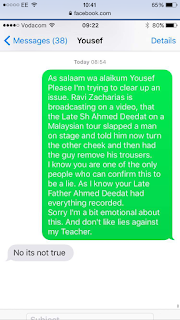 "The story about the late Deedat from Zacharias is highy Questionable. I don't think Zacharias verifed his source/information.I knew the Late Ahmed Deedat personally and engaged with him often since early 70s. I personally don't think he would have done such a thing."


A Malaysian who is a former student at the university Ravi Zacharias refers to denounces Ravi's story as a fib (click to enlarge): 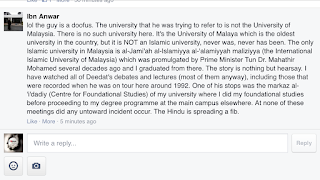 One of Sheikh Deedat's students who spent a lot of time with him suspects it's a made up story:

"I spent a lot of time with Deedat and know cameras were even in his office to record encounters with missionaries. If it were the case it would be on film as he recorded everything" [Yusuf Bux]


I have skimmed through 3 different Sheikh Deedat lectures held in Malaysia which are online (see links below) and I did not see this alleged incident! Here are the three I skimmed through:

The Message to Mankind (in Malaysia) by Ahmed Deedat

The Miracle of Miracles (in Malaysia) by Ahmed Deedat


Lastly, the story does not even seem plausible. Why would a grown man take their trousers off on stage at a university. Much less a lecturer? And  evenIF this part of the story was true how can one use such a story to malign Ahmed Deedat? Shouldn't one be looking at this 'lecturer' who chose to strip on stage?

This story seems like a lie. Whether Ravi was a victim or perpetrator of this suspected lie is in question.  A public comment from Ravi Zacharias' organisation as per the scandal concerning his credentials would be most welcome.

If Ravi is unwilling to commit to this story a public apology to Sheikh Ahmed Deedat's students, friends and family would be highly encouraged too. This of course must be upsetting and emotional for them.

May Allah give Sheikh Ahmed Deedat paradise and may Allah bless Sheikh Deedat's family and friends with further good. Ameen.


Ravi Zacharias Scandal: Not A Dr and Not a Visiting Scholar at Cambridge