Hi Dr James White, just so you know, I've missed the Liverpool match for you this afternoon. I was too busy putting my research together to assist you in this undertaking of understanding why Prof. Bart Ehrman considers you to be "offensive" and not a nice fella. 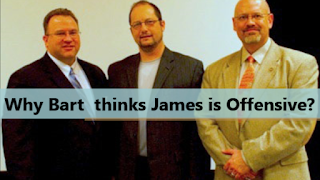 I understand you believe he does not look at your material but perhaps some of your comments prior to his comment filtered through to him via second-hand information? [For those unaware, you can read Bart's comment in the video presentation - let's call it a video]

It transpires you labelled him all the following prior to Bart calling you offensive and not a nice chap:

Did I miss anything? Let me check, you also said he's on a crusade, he makes his money out of attacking Christianity, you spoke about his 'background' and your buddy was laughing at one of your mean jokes about him.

That's a lot of stuff there, James. I've documented it in this video. However, seen as I did you a good turn I'm going to ask for a favour from you. Accept one, preferably two seen as I missed the match as well, from the 5  below:

1. You publicly apologize for recently attacking me for videos I did not make. BTW those comments you made about me were mean, as mean as the anti-Bart Ehrman comments. Making mean comments about somebody based on something they didn't actually do seems really unfair. Don't worry, I have a thick skin.

2. Apologize publicly for your demeaning comments towards Middle Easterners and other non-Westerners such as Africans

3. Accept to field some questions prepared by yours truly [that's me:)] on the Trinity idea and NT reliability for you to answer later on a DL episode.

4. Discuss the challenge which was posed to you Christians a few years ago by pondering on this one question on the stability of the NT text

5. Recommend me to Dan Wallace so we can hop over to North Africa (or wherever he's sifting around for NT manuscripts) and try to find some new early manuscripts to help discern which parts of the New Testament are forgeries or not ala Dr Von Tischendorf's find in the 1800s. As you can see, I have a knack at finding stuff. I will however need a team to help me - you can't seriously expect me to do it all by myself. Give me Mr Wood (minus his wife's underwear, wouldn't want to upset the natives in the East) and Mr Shamoun. They look like hardy fellas who could do some digging and other manual labour. I'm joking, this one is silly. Or, at least, I think it's silly. Perhaps Dan or yourself see some potential in the idea after all, when you're desperate you resort to desperate measures :)

Video: Why Bart Ehrman is offended by James White

If the video doesn't play, it's also uploaded here

For those who think I made those comments up, you can find the original audio and video comments by James White in this lot:

The written comments are from:
http://www.aomin.org/aoblog/index.php/2010/04/07/a-quick-and-frustrated-review/


OK, I'm done here. Over to the James White  supporters to pass this on to James. Don't worry, he won't bite. Just  email it to him. It will help him. Perhaps he will even change his ways. Maybe he never realised how mean he comes across to the average listener/viewer/reader?

If you're a Trinitarian Christian, let's face it, out of all the Christians (including Mormons, if you want to lump them in there too) the evangelical Christians on the net are the loudest and rudest. I find Catholics and Mormons to be better human beings - based on my limited experience of them. Not sure what's going on over there in the evangelical camp but you've got some rude, obnoxious and offensive missionaries, pastors, church elders and apologists.

When you evangelical boys and girls say you are guided by the Holy Spirit we look at you with puzzled looks.


Alpha and Omega Ministries Asked To Switch The Lamp On

Is Luke 23:34 another New Testament corruption?

Discussed: Variant Readings within the Bible and the Quran

Is the Trinity in the Old Testament?

Polygamy IS in the Bible - Christians Stop Being SCARED of Liberals

A Question for Dr Ben Witherington and Prof. Dan Wallace

Mary In The Qur'an

Does the Quran include Mary in the Christian Trinity? Ali Ataie Answers