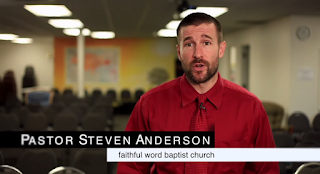 Anyone who curses their father or mother is to be put to death. [Exodus 21:17]

According to Steven Anderson, Jesus is backing up the commandment in Exodus 21 in Matthew 15:

Matthew 15:4 For God said: 'Honor your father and mother' and 'Anyone who curses his father or mother must be put to death.'

Pastor Steven Anderson teaches this refers to people who curse their parents (not insult or are disobedient, i.e. those children who wish their parents will die or go to hell) and those who hit their parents

Mark 7:10 For Moses said, 'Honor your Father and your mother,' and, 'Whoever curses his father or mother must be put to death.'


23From there Elisha went up to Bethel. As he was walking along the road, some boys came out of the town and jeered at him. “Get out of here, baldy!” they said. “Get out of here, baldy!” 24He turned around, looked at them and called down a curse on them in the name of the Lord. Then two bears came out of the woods and mauled forty-two of the boys
This video is also uploaded here