So here we have it folks. As close to an admission you will get from Sam Shamoun of dishonesty – sadly no apology!


You will know that one of Shamoun’s colleagues (Anthony Rogers) was the victim of some misinformation concerning the number of soldiers who accompanied Prophet Muhammad to liberate , see here:
http://www.youtube.com/watch?v=iyrx-qLP0Ak


Anthony claims Al-Tabari said it was 12,000 (which was found to be untrue - see here). Anthony got the misinformation of A-Tabari stating 12,000 liberated from Sam Shamoun’s article, see the screenshot of the relevant part in case Sam has another bout of dishonesty: 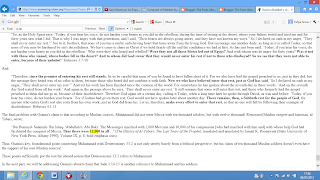 So, as you can see, Sam Shamoun partially quoted from the Al-Tabari reference, this is the part which he did cite:


You can see, the citation is incomplete and it’s unclear (due to the omission of the entire reference). However, it becomes OBVIOUS why Sam Shamoun did not cite it fully. He did not cite it fully as the full reference shows the 12,0000 were in fact going to confront the Hawazin NOT THE MECCANS (the Hawazin were confronted 19 days AFTER the Conquest of Mecca in the Battle of Hunain). Here is the full citation which Sam Shamoun provided upon being pressured in my comment section yesterday:
The Messenger marched with 2,000 Meccans and 10,000 of his companions [who had marched with him and] with whose help God had facilitated the conquest of . Thus there were 12,000 in all. The Messenger of God placed 'Attab b. Asid b. Abi al-'As b. Umayyah b. 'Abd Shams in charge of [to look after] the men who stayed behind while he proceeded to confront Hawazin."


Notice the omission of WHO these 12,000 were confronting? Sam tried to mislead people into thinking that the Al-Tabari reference was telling us 12,000 took part in the Conquest of Mecca by DECEPTIVELY omitting the part where it tells you it was concerning a battle against the Hawazin (Battle of Hunain)
So as we can see, the reference is clearly not about Mecca. Shamoun knew this but misdirected (let's be blunt deceived) Anthony Rogers and other Christian readers into thinking the number of soldiers in the Conquest of Mecca were 12,000. Shamefull deceptive!


Sam Shamoun, in his desperation to push away the Muslim argumentation that Deut 33:2 refers to Prophet Muhammad and the 10,000 soldiers who liberated Mecca, dishonestly claims that the number of the soldiers was 12,000. He uses the reference from AlTabari (above) to convince his Christian audience of this whilst KNOWING the reference was not about Mecca but about the Battle of Hunain (confronting the Hawazin) -  a battle that took place 19 days after the Conquest of Mecca which comprised of 10,000 companions who took part in the Mecca conquest and 2,000 others (largely Meccan converts to Islam after the Conquest of Mecca)  who swelled the ranks AFTER the Conquest of Mecca.


Sam Shamoun knew the AlTabari citation was in fact about a different battle hence his omission of the crucial part of the reference  (that the 12,000 were going to confront the Hawazin NOT to conquest )


In fact, even from the bit he did cite, anybody with decent reading comprehension would be able to see that AlTabari was not referring to the Conquest of Mecca but soe battle AFTER the conquest as he differentiates between the 10,000 companions (those who helped liberate Mecca) and the 2,000 Meccans who joined he Muslims after they had seen their city taken over by the Prophet (p).


PS The number of 10,000 is actually confirmed by alTabari in that citation for those who are informed but there is actually a Hadith from Bukhari which confirms the number to be 10,000. See here:
http://thefactsaboutislam.blogspot.co.uk/2013/07/10000-or-12000-liberated-mecca-with.html

Does Answeringislam.org believe in all their resurrection stories unlike William Lane Craig?:
http://thefactsaboutislam.blogspot.co.uk/2013/07/william-lane-craig-doubts-resurrection.html

The topic is YOUR deceptive citation of al-tabari

Face facts, you deceived Rogers (and who knows who else). You left Rogers looking silly in the debate all because of your dishonesty.

You seem obsessed with spamming stuff that's not related to the topic? Why?

To detract attention from your dishonesty?

Then you have he audacity to ask me to debate you. LOOK at all the posts in the Sam Shamoun section which literally show you up to be foolish, dishonest, unscholarly and uncontrolled

Now have some self-control Sam and go away to rethink your life. Come back with an apology for your dishonesty

A man without self-control is like a city broken into and left without walls. [Proverbs]

3. How many fighting men were found in Judah?
•Five hundred thousand (2 Samuel 24:9)
•Four hundred and seventy thousand (I Chronicles 21:5)

9. When did David bring the Ark of the Covenant to Jerusalem? Before defeating the Philistines or after?
•After (2 Samuel 5 and 6)
•Before (I Chronicles 13 and 14)

11. When David defeated the King of Zobah, how many horsemen did he capture?
•One thousand and seven hundred (2 Samuel 8:4)
•Seven thousand (I Chronicles 18:4)