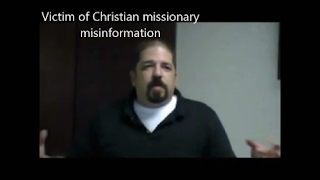 Recently I highlighted Anthony Rogers of AnsweringIslam.org as being conned by his Christian missionary colleague, Sam Shamoun, concerning a narration from AlTabari. Shamoun in his desperation to repel Muslim argumentation regarding Deut 33:2 decided to fudge things (that's to say he turned to deception).

Sahmoun presented this narration from AlTabari in his attempt to convince people that 12,000 soldiers took part in the Conquest of Mecca , this is how he cited it:

Notice the citation is incomplete. Shamoun's objective here is to convince people this narration from AlTabari is speaking about the conquest of Mecca.

The Messenger marched with 2,000 Meccans and 10,000 of his companions [who had marched with him and] with whose help God had facilitated the conquest of . Thus there were 12,000 in all. The Messenger of God placed 'Attab b. Asid b. Abi al-'As b. Umayyah b. 'Abd Shams in charge of [to look after] the men who stayed behind while he proceeded to confront Hawazin."

Anthony Rogers is  silent on this, why? Simple, he knows Shamoun was deceptive and conned him!

Why did Shamoun hide the crucial information of who this battle was against? Because he wanted people to think Al Tabari's narration taught 12,000 soldiers took part in the Conquest of Mecca thus aiding his attempt to refute the Muslim argument that the 10,000 saints mentioned in Deut 33:2 referred to the 10,000 soldiers with Prophet Muhammad at the Conquest of Mecca.

Recently Shamoun, Rogers and one of their ardent followers have taken to obfuscation on this issue. They have remained silent on this issue but have tried to introduce other sources into the mix.

One step at a time fellas. Why did Shamoun deliberately deceive people concerning this narration in Al-Tabari?

For more information on this saga see here:
http://thefactsaboutislam.blogspot.co.uk/2013/07/answeringislamorg-tacit-admission-of.html

N.B Anthony Rogers recently accused me of disparaging Jesus (p). I stated he was lying and asked him for examples. He was immature and provided no examples. Stop lying Anthony and apologize. Screenshot: 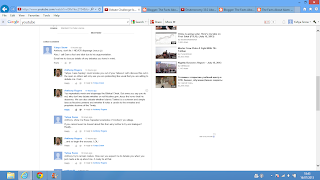 He said, “The LORD came from Sinai and dawned from Seir upon us; he shone forth from Mount Paran; he came from the ten thousands of holy ones, with flaming fire at his right hand. (deut 33:2)

This poor fellow is so desperate to attack Sam that he didn't answer anything Anthony wrote.

Looks like there is still a lot of snow to shovel.

"Anthony Rogers is silent on this, why? Simple, he knows Shamoun was deceptive and conned him!"

When in fact Anthony did respond to you when he wrote in his article, something you have failed to respond to...

"And so, even if it were the case that I (and Sam) misunderstood al-Tabari, it would still leave intact the two major reasons that stand over against taking the passage as a reference to Muhammad."

So there u have it snowman even if we have poor reading comprehensions skills like u do, it still does not change the fact that Deut 33:2 is about YHWH God and not about Mohamed.

You need to disregard all the other Islamic sources and use your Islamic reading comprehension skills in order to understand Al Tabari as saying. "However, when the entire citation is quoted one can see it's not about the Conquest of Mecca but about the Battle of Hunain (against the Hawazin)."

But as Anthony Rogers pointed out even if what u are saying is true, which the multiple Islamic sources Anthony Rogers cited proves to the contrary. It still doesn't change the fact that Deut 33:2 is about Mohamed.

So Anthony Rogers and Sam could concede the point. Congratulations you won a minor skirmish, but you still lost the war.

You can watch Osama Abdullah and now Yahya Snow lossing the war by watching the entire debate.

Notice that the only point the Snowman has brought up so far is on the number of Jihadi's that conqured Mecca as recorded by Al Tabari. A minor point that Anthony Rogers made after he made his two prime points.

2.it is a poetically dressed narrative of what happened rather than a prediction of something in the future;

So Snowman ends the season with a 1 and 2 record. Thats one win and two losses.

So Snowman when are u ever going to address the real issues?

Snowman before you write an article claiming victory, just to let you know I was being sarcastic when I granted you your single victory.

I've told you, you can discuss that debate and Deut 33:2 in the review.

About Anthony Roger's accusation saying Yahya blasphemed against Jesus I really don't know what he is talking out.I never saw any example.

I live in a place where practically nobody is Christian,and Jesus is just a historical figure,but of little interest to people.As little interest as the ideas of the Buddha(a man I admire very much,though I disagree with some points).And Yahya has never said anything negative about Jesus,nor have any other non-Christians I know.I think Rogers made a slip of the tough.

Snowman what review? How can I discuss it when u have yet to write it.

Snowman just and FYI, every time you deny that Jesus is the Son of God, you deny the father, so you blaspheme.

Everytime you deny that Christ died on the cross and was raised from the dead you blaspheme.

And everytime you say something foolish like "Muslims pray like Jesus, or Muslims fast like Jesus" you definitely blaspheme against Jesus, logic, common sense, and just down right decency

This minoria guy is such a snake. He can't decide whose side he is on. He also doesn't appear to know the Bible very well. Anthony said Yahya disparages the BIBLICAL Christ, not the Christ of Yahya's false prophet and false book. In rushing to the defense of Yahya the Christ-hater Minoria says he has not spoken negatively of him and thus shows he doesn't know or at least is not sold out to the true Jesus. Pick a side, Minoria. Otherwise you won't be embraced by either. Choose this day who you will serve - Yahweh or Baal.

I am curious do you profess to be a Christian? And if you do what does that mean to you to profess being a Christian?

To Minoria it means straddling the fence and playing both sides. He reminds me of the guy in the Mummy who had every amulet he could representing all kinds of different deities in the hopes that he was covering all his bases just in case.

I see your point. Poor Minora its not going to work out so well for him in the end. Just like it didn't work out for that guy in the Mummy, he got his in the end.

Looks like the snowman is tucked away safe in his bed. While visions of spooky jinns dance through his head.

Yes I am a Christian,one who believes salvation is only by faith in Jesus and not by works.

2.Ok,but wouldn't God ALSO TELL them to investigate,research,analyze as to WHY they should believe?

3.Now I know it was just an emotional thing.But Derek Adams is different,he really investigated,but after much thought came to the conclusion it was false.He believed,researched,then disbelieved.But the fact he really searched shows he really had faith.It was not an emotional thing,so he was really saved,and once saved always saved,because if salvation depends on always believing then it because a good work.

And salvation is a gift,the woudl translated as "grace" means "favor".

Minoria your theology is poles apart from what the Bible teaches. DK does not believe and therefore is not saved. The Bible does not teach that apostates are saved. Go read the book of Hebrews.

Just read your comment,I don't check out the comments every day since one has to work.But I base my belief on the arguments of Dr Charles Stanley's "Eternal Security".He is a learned scholar,he must know a thing or two.