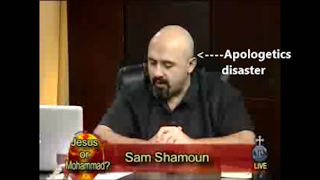 It appears Sam's 'look at me approach' is not limited to spamming blog comment sections (like he does on here and on Paul Williams' blog). He even has people making silly debate challenge videos. I think he had someone make one directed at me a while back. Here is the latest one which Ijaz Ahmed of Calling Christians has responded to.

Notice the sheer lack of regard people on the debate circuit give Sam Shamoun. Really. His opponents seem to think he has a mental problem - Paul Williams has agreed to debate Shamoun with the proviso that Sam Shamoun gets a doctor's note certifying Sam is mentally stable for a debate. You'd think he would have got the message by now.

Sam Shamoun heaps ridicule on himself. Is there someone out there who loves Sam enough to actually tap him on the shoulder and say, "hey Sam this internet apologetics thing is detrimental to you reputation wise, mentally and financially; it's time to step aside and get a job"?

You'd think one of his fellow Christian apologists would think this guy is an apologetics disaster and attempt to get the guy out of the arena before he embarrasses them even more. Perhaps they have...

You mentioned Mutah. It's not allowed in Islam. Here is a scholar to tell you:

I ask Sam and you who believe in Deuteronomy 21:10-14, which allows the marrying of any captured woman you find attractive (even if previously married prior to capture, the question of what if some Texan Christians did this to you. That's to say, they turned up at your state and killed many of the men and took your wives, sisters, mothers and daughters and married them?

Would you agree with this as it seems to have been done in Judeo-Christian times (see Deut 21:10-14).

Would you like it if the Texan Christians annulled your marriages and married your wives whilst they were acting on Deut 21:10-14?

Sam your article has been refuted here:

An Israelite could not touch a captive he found attractive for 30 days, which allowed for the captive to mourn the loss of her family and country. The intention of this law was to protect her against any rude passion on the part of the man (i.e., rape). It also gave her time to blend in with the Israelites and to develop affection for the man. Hence, the law served as a mercy from God to protect her against rape. It clearly highlights God’s great compassionate for non-Israelite women taken in war. Gentile women were not necessarily given covenant protection as Israelite women were given. And yet God gives these captive Gentile women protection and insures that they were not regarded as mere slaves, or as contraband from the battle. God in his love gave them the full status of wives, just like Israelite women!

M.G. Kline, considered one of the leading Old Testament theologians of the last century, wrote regarding on Deuteronomy 21:10-14:

This first of three stipulations concerned with the authority of the head of the household (cf. vv. 15-21) deals with the limits of the husband's authority over his wife. The case of a captive woman (vv. 10,11; cf. 20:14; contrast 7:3) is used as a case in point for establishing the rights of the wife, perhaps because the principle would obviously apply, a fortiori in the case of an Israelite wife. On the purificatory acts of verses 12b, 13a, which signified removal from captive-slave status, compare Lev. 14:8; Num. 8:7.

On the month's mourning, see Num 20:29 and Deut 34:8. This period would provide for the achieving of inward composure for beginning a new life, as well as for an appropriate _expression of filial piety. 14. Thou shalt not sell her. A wife might not be reduced to slave status, not even the wife who had been raised from slave status… then thou shalt let her go whither she will. The severance of the marriage relationship is mention here only incidentally to the statement of the main principle that a man's authority did not extend to the right of reducing his wife to a slave. This dissolution of the marriage would have to be accomplished according to the laws of divorce in the theocracy (cf. Deut. 24:1-4). Not the divorce was mandatory, but the granting of freedom in case the man should determine to divorce his wife according to the permission granted by Moses because of the hardness of their hearts (cf. Matt 19:8). (Wycliff Bible Commentary [Oliphants Ltd.: London, 1963), p. 184)

I ask Sam and Rad who believe in Deuteronomy 21:10-14, which allows the marrying of any captured woman you find attractive (even if previously married prior to capture, the question of what if some Texan Christians did this to you. That's to say, they turned up at your state and killed many of the men and took your wives, sisters, mothers and daughters and married them?

Would you agree with this as it seems to have been done in Judeo-Christian times (see Deut 21:10-14).

Would you like it if the Texan Christians annulled your marriages and married your wives whilst they were acting on Deut 21:10-14?

Sam your comments have been deleted. Try to remain calm. Nobody is afaraid to debate you. You just lost this debate.