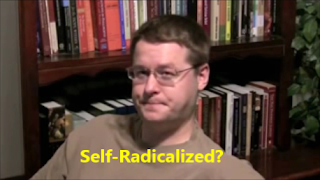 I have had email conversation with a young lady called Negeen Mayel. She used to be part of Acts 17 Apologetics/Answering Muslims. As the emails are confidential I shall not publish them, however she did leave a comment on my blog which is open to the public so I shall feature it in this blog post. Through Negeen Mayel's comments one can observe that people do see through the hatred and sheer radicalisation which Islamophobia brings upon a person.

I honestly to this day have never viewed that video that David posted. I don't need to, he is wearing a womans spaghetti strap and posted it on his website that is associated with his ministry that seeks to win Muslims to Christ. This degree of outlandishness displays a lack of sheer respect towards the muslim community and that video should not have been posted. Over time I have come to seriously doubt the wisdom behind certain things that David does. Self radicalization can happen to anyone. Unfortunately, I think David has self radicalized himself into having a perspective of Islam that is heavily influenced by evil actions committed by bad people. If I wanted to spend all day reading articles about evil actions committed by Afghanis I would begin to hate all Afghans, but because I have a broader understanding of the Afghan community, because I have been around Afghans who love, laugh, and give generously I understand that not all Afghans are terrorists who hate women. I really wish David would spend less time self radicalizing himself and spend more time amongst the homes of normal muslims who love the good things in this world

It's sad to see a bloke who absolutely oblivious to the irony of him painting Muslims as extremists looking to rape, plunder and butcher whilst he himself is being labelled a radical by his own friends/colleagues. Speaking about his friends and colleagues, where's Nabeel Qureshi? That's right, he is not part of Dave's crew anymore? Where's Hogan, I haven't seen him for a while? Has he left hatred of Muslims and Islam too?

I think this is a success story that should help inspire all those who are opposing Islamophobes - people do turn away from the Islamophobes and recognise THEM as the radicals!

David, is this the what you want to be known for? People who donate to you and feed your ego are not your friends. I've seen the comments of some of your followers - these people hate Muslims. What happens when these people get bored or just grow up? They will leave you - no more donations and no more ego-feeding yelps. Look at the example of Sam, he's been doing his stuff for well over a decade and he is scratching around on the net for donations with a miserable reputation amongst his own and amongst Muslims. Is this what you want? Is this what you really want? This IS what Islamophobia delivers.

Dave, please have a rethink.

NOTE: I hope this post helps encourage others affiliated with Islamophobic elements to break free.

What David's Islamophobic supporters do not want you to see (over 40 posts rebuking David Wood - scroll down and also view the older posts in this section):
http://thefactsaboutislam.blogspot.co.uk/search/label/David%20Wood

Watch a Muslim dominate a debate about whether Muhammad is in the Bible - Samuel Green and Zakir Hussain:
http://thefactsaboutislam.blogspot.co.uk/2013/08/debate-review-muhammad-in-bible-zakir.html

This isn't an accurate picture of David. David distinguishes between those peaceful Muslims who are not living out the teachings of the Qur'an and violent Muslims who are (along with those who support what they are doing). Moreover, rightly or wrongly, David sees the Qur'an at the bottom of the violence of Muslims and thus the true picture of Islam, so it is natural that that is his focus and not things being done by less consistent Muslims.

I'm myself a Christian apologist, but I agree that what David Wood does is rather pitiful.

Many of the arguments he uses against Islam completely destroys his evangelical Christianity.

He keeps complaining about Muslim evils while ignoring the GENOCIDES contained in his allegedly inerrant Bible.

I'm going to criticize Islam (in a kind way) on my blog, and believe me, it's going to be far better than what we've ever read from Evangelical apologists ;-)

Time to break out the check book

What Lothar is trying to say is that he is a catholic who is more interested in attacking evangelicalism in order to support the idolatry of Romanism and Papalism than in joining the fight wholeheartedly against the violent religion of Islam.

What is funny is while Yahya thinks he is exposing David, he is actually exposing those who are not robustly committed to the Lord Jesus Christ.

It is interesting to see where people's priorities are. Even if Negeen had a cogent complaint against David's views and they weren't motivated by personal failures in her own life that in turn led to the severing of many relationships that she once enjoyed, you would assume that her commitment to Christ would lead her to voice these disagreements in a Christian way that doesn't seek to undermine David's stalwart defense of the Christian faith. These people show that they are interested in promoting themselves and attacking Christ's people more than seeing Christ preached.

Radical u have a job?

If you are reading this, would you be able to kindly make a video stating your problems with Acts 17, and David Wood?

I will have to check out Lothar's blog,it sounds interesting.

Regarding David,guys,when he uses the word Muslim he is,by the context,referring to those Muslims who are anti-human rights.It is self-evident,he doesn't mean everybody.

There are several anti-human rights groups(Hamas,Hizbullah,Al-Qaida,the Iranian government,the Muslim Brotherhood,etc) that THEMSELVES say they are Muslim

And those people are very dangerous and support,in one way or another,terrorist actions(er,killing innocent people).

And they cite the Koran and hadiths,

About the reactions of non-Muslims

The great majority of non-Muslims in the West,in fact in the world,know that terrorist actions done by groups in the name of Islam is one thing and ordinary Muslims is another thing.

I am tired of people(usually leftists) insinuating that the ordinary non-Muslim is so emotionally immature,has such low self-confidence,lack of basic common sense,that he or she is incapable of making such a simple distinction.

There is another thing,it is about the word Islamophobia.

But I want to emphasize that Spencer,Wood,Geller,Dawkins,Harris are in no sense in favor of persecuting,discriminating,killing Muslims(that goes against our share human-rights belief).

In other words they are Not Muslimophobes(like there are those who are homophobes,Judeophobes,Negrophobes,etc).And when they are against a specific Muslim it is because that Muslim is anti-human rights.

Pretty good post. I just stumbled upon your site and wanted to say that I have really enjoyed
reading your site. Any way I'll be subscribing to your feed and I hope you post again soon.

so, i just want to ask one thing. david wood put news about muslims atrocities in his website, which he did not write nor report himself, but quoted from real news agencies, and somehow that makes him a bad person? why? muslims claim that islam is peaceful, and tolerant, and nice. in my country indonesia, last year the sunni muslims kicked out shia muslims out of their houses, just because they are shias. this year, those shia muslims are allowed to return, only if they become sunnis. where is the tolerance? where is the peace? 2 or 3 years ago, mobs of sunni muslims, attacked ahmadiya muslims, and burnt down their mosques. can this be the "peace" and "tolerance" of islam?

The book of Genesis from God's Holy Word says

This son of yours will be a wild man, as untamed as a wild donkey! He will raise his fist against everyone, and everyone will be against him. Yes, he will live in open hostility against all his relatives."
Gen 16:12
New Living Translation

I neglected to mention, for those not familiar with this historical narrative, it is Yhwh God talking to Abraham regarding Ishmael