A Christian's Observation of Ex Muslims 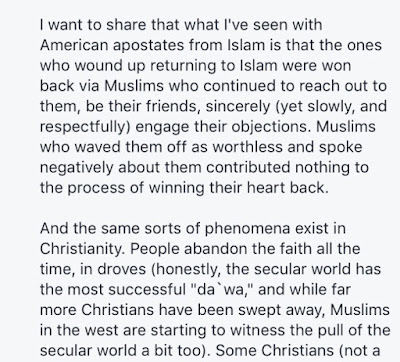 "I want to share that what I've seen with American apostates from Islam is that the ones who wound up returning to Islam were won back via Muslims who continued to reach out to them, be their friends, sincerely (yet slowly, and respectfully) engage their objections. Muslims who waved them off as worthless and spoke negatively about them contributed nothing to the process of winning their heart back.

And the same sorts of phenomena exist in Christianity. People abandon the faith all the time, in droves (honestly, the secular world has the most successful "da`wa," and while far more Christians have been swept away, Muslims in the west are starting to witness the pull of the secular world a bit too). Some Christians (not a majority, but nonetheless a bunch) who leave the faith wind up returning. Christians who belittled them or spoke negatively about them (in some of the same ways as described above) contributed zero to their return. On the other hand, Christians who continued to respect them, maintain friendships with them, and slowly have long on and off conversations with them (which could span months or even years) were significant factors in winning them back."