There's a breeze of brilliance and modesty blowing from this part of Arabia (The Emirates) which is full of respect for women plus pure and utter common sense. We have recently seen UAE come out top for respecting women and now we are seeing more to warm our cockles - Qatar is calling for modest dress and is opposing the oppression of leggings. 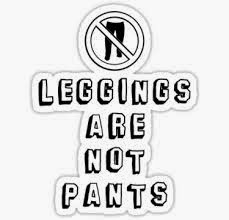 I'm in Britain and see young ladies wear leggings in a manner which are immodest to an extreme - it's so sad that these poor girls in Britain and the US are being pressurised into wearing such immodest dress. These girls are victims. You see, the West doesn't hold a knife to these girls' throats while forcing them to strip off more modest clothing and don immodest dress BUT the West does pressure these girls through popular culture and a faux beauty standard to wear such immodest gear. The West destroys a girls self esteem and confidence in herself all in favour of consumerism - the West sees their women as customers for fashion, cosmetics (including surgery) and the like. There aren't many Christians speaking out about this but the MUSLIMS are battling hard for the basic right of women to be allowed to have self esteem and dignity. The West is trampling on this right while Qatar is trying to uphold this right and is really championing the cause of women.
I salute Qatar for standing firm in promoting modesty. IF only we could have  the Muslim Arabs in QATAR sail over and rescue our British girls from the evil designs of the sinister anti-woman system that is oppressing our women and girls in the UK (and America). At times like this we need heroes. Qatar could well be the knight in shining armour the thinking British girl and American girl is looking for. Those girls and women who are sick of having to wake up an hour earlier than their male counterparts in order to beautify themselves and don revealing outfits just to go to work. It seems like Qatar is trying to at least rescue legging-clad girls from the leering of men and the harassment and sick sexual objectification that comes with it. EVERY body in London has seen it. It's sad and it gets sadder still as there aren't that many people other than Muslims who are speaking out against the oppressive device that they are pressurising Western women and girls to don - the leggings!
I hope all the British, Australian and American girls and women who have seen their self esteem destroyed through the West's pressure to conform to an unrealistic beauty standard are going to write letters of support to the Qatari government. Please do. Please invite Qatar to spread their common sense, care and respect for women to the West too.
Please thank Qatar for protecting women from perverts and uplifting their self esteem and sense of modesty. Even if you are a perverted man who ogles at these girls in leggings you should recognise Qatar's respect for women.

THE Arab emirate of Qatar has issued a decree telling tourists that leggings are not pants.
The Gulf state has launched a modesty drive to make sure tourists understand what is and isn’t appropriate dress. And leggings fail to make the cut.
The Reflect your respect campaign, managed by Qatar’s state-run Islamic Culture Centre, uses Twitter, Instagram and leaflets distributed in public places to inform visitors of basic modesty laws in preparation for the 2022 Football World Cup.
“If you are in Qatar, you are one of us. Help us preserve Qatar’s culture and values. Please dress modestly in public places,” the leaflets explain.
The word “modestly” has been starred on the leaflet and a footnote reads: “Leggings are not pants”.
According to Qatar leggings are not appropriate dress because they are too tight and they can be translucent.
“It is expected that you wear decent clothes and women should avoid wearing any garments that are too tight; too short or translucent such as mini-skirts or sleeveless dresses,” the Culture centre says.
Stand up for the rights of women and speak out against the sexualised clothing our Western women are pretty much pressurised to wear. [Source]
Great to see Muslims standing up for women's rights and opposing the sexual objectification of women. Where are the Christian countries who are doing the same? Come on Christian countries, join the Muslims in protecting women and girls. PLEASE HELP TO STOP THE OBJECTIFICATION OF WESTERN WOMEN!!!

If a Muslim School Forced Female Teachers to Wear Underwear and Banned Spandex...

Ex-Muslims in Muslim Countries and Self Hatred