I think it is an emotional thing with them.They can't admit the Bile actually says the God deceives,even if it is only the evil people.I don;t see any other explanation. 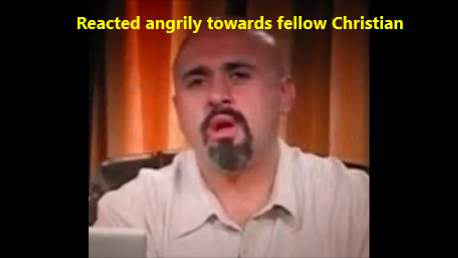 Well, what can you say but fair play to James White for exposing the dishonesty of certain Christians in his book 'What Every Christian Should Know About the Quran'. It's also encouraging to notice that other Christians have rebuked these two hate preachers regarding their dishonest reading and hypocritical arguments - sadly one of the hate preachers reacted angrily to his fellow Christian's rebuke.

I fear, the dishonest hate preachers who Nabeel Qureshi will not even defend, Sam Shamoun and David Wood, will continue with their online money making operations; receiving cash from gullible and hate-mongering supporters.

Whatever happened to the days of discernment where one could easily recognise the charlatan from somebody with scholarly authority? Whatever ever happened to those days? This is a problem of the internet, the lines between the amateur, the charlatan, the scholar and the downright dishonest have been blurred and people are taking advantage of this haze.

We all know the impact of dishonest Eastern Christians in the West (i.e. Ergun Caner, Walid Shoebat, Usama Dakdok etc.) who spout what they think their audience wants them to hear with a complete disregard for scholarship and accuracy yet what's not so well documented is the manner in which a number of Western Christians readily offer dishonest servings to their followers and take the cash at the end of the day. 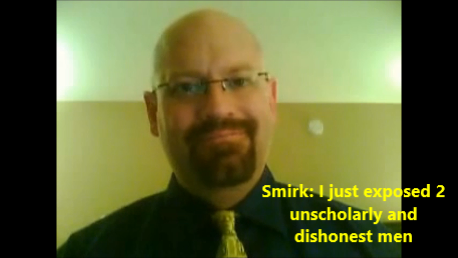 I'm glad we can use Dr James White to expose the dishonesty and duplicity of two Christian hate preachers here - I guess a Christian exposing other Christians makes a bigger statement than a Muslim doing such in the current climate. Just like when Ergun Caner's lies were being exposed - a Muslim, Mohammad Khan of fake exMuslims was trundling along and exposing Ergun Caner pretty steadily but when James White clambered on the bandwagon there was a bigger impact as it was a Christian exposing the dishonesty of a co-religionist.

Let's pray this important video has an impact in stimulating the Christian hate preachers, David Wood and Sam Shamoun into self reflection and ultimately a change of approach on their part -  a turning away from hate preaching and misinformation.


A discussion on the Quranic Verses mentioned in the video:
http://thefactsaboutislam.blogspot.co.uk/2013/05/best-of-deceivers-of-best-of-planners.html

Don't they and other Christians not see they are simply repelling people from their faith and their church? Don't they not stop to think that a well known Christian saying is 'the truth shall set you free' yet they operate out of the boundary of truth? Don't they know this?

It's time for Christians like James White and others to regulate the dishonest amongst their ranks - regardless of whether they are Calvinists, Armenians or whatever. Folk such as Christian hate preachers make the dialogue between Muslims and Christians uneasy and much more difficult.

The truth should be valued.  A better quality of dialogue can ensue between Muslims and Christians when Christian leaders (such as pastors, apologists and elders) decide they value the truth enough to weed out the dishonest amongst their ranks

Speak up for the truth. The truth is something that does set people free - free from the guilt of dishonesty.

James White wrong about the Ebionites

Regarding the Biblical verses about God deceiving evildoers:

2.Others says it is indirect,that God gives permission to evil spirits,to deceive the evildoers.(1 Kings 22:19-28).And also:

"Then a spirit came forward and stood before the LORD and said, 'I will entice him.' And the LORD said to him, 'How?' 21"He said, 'I will go and be a deceiving spirit in the mouth of all his prophets.' Then He said, 'You are to entice him and prevail also. Go and do so.' 22"Now therefore, behold, the LORD has put a deceiving spirit in the mouth of these your prophets, for the LORD has proclaimed disaster against you."

Shamoun wrote an article about it in answering-islam called "Does Yahweh really deceive?".

A SITUATION THAT IS ILLOGICAL

Saul was the first Jewish king and he fell out of favor with God and God makes things worse for him by sending an evil spirit to make him more evil,in 1 Samuel 16:14-15:

" Now the Spirit of the Lord had left Saul, and an evil spirit sent from the Lord began to torment him, 15 so Saul’s servants said to him, “You see that an evil spirit from God is tormenting you."

You might say the passage does not say that.It doesn't then but later in 1 Samuel 19:6-15 the evil spirit sent by God makes Saul try to kill David.God made a bad situation worse,no logic in that:

"Saul listened to Jonathan and then made this promise: “As surely as the Lord lives, David won’t be put to death.”

7 So Jonathan called to David and told him everything that had been said. He brought David to Saul, and David was with Saul as before.

8 When war broke out again, David went out to fight the Philistines. He defeated them, and they ran away from him.

9 But once again an evil spirit from the Lord rushed upon Saul as he was sitting in his house with his spear in his hand. David was playing the harp. 10 Saul tried to pin David to the wall with his spear, but David jumped out of the way. So Saul’s spear went into the wall, and David ran away that night.

11 Saul sent messengers to David’s house to watch it and to kill him in the morning. But Michal, David’s wife, warned him, saying, “Tonight you must run for your life. If you don’t, you will be dead in the morning.” 12 So she let David down out of a window, and he ran away and escaped. 13 Then Michal took an idol, laid it on the bed, covered it with clothes, and put goats’ hair at its head.

14 Saul sent messengers to take David prisoner, but Michal said, “He is sick.”

As you can see it is the evil spirit sent by God that made a bad situation worse.

THE RELATION WITH HELL

1.One could argue it is all for the better,in a mysterious way,but that doesn't convince one.

2.Because if one believes in a hell(whether with a literal fire or not)then God making a bad situation worse by allowing evil spirits to persuade you to be even more evil has no logic and rationality.

3.Because it would mean an increase in the sufferings of people in hell due to God having sent/allowed evil spirits to make them do more evil.The only logic in such actions one can see is if their is no hell.The doctrine of annihilation or conditional immortality.