I remember a few years back when Nabeel Qureshi was hanging out with some Christian rabble-rousers looking to antagonise Muslims with distortions and outright lies about Islam.


Nabeel managed to move away from that crowd (for that we commend him) and has since taught at  and is due to (if not already has) join Ravi Zacharias’ preaching team at Razi Zacharias International Ministries.


As Dr Nabeel Qureshi has a higher profile position now and is not scratching around the internet as are his former colleagues I’d like to urge Nabeel to speak the truth in any congregation – regardless of whether cameras are there or not.


Nabeel, you now have people in your gatherings believing you are a man giving truthful information about Islam. Please do not give in to any urge to speak untruthfully about Islam in order to convert Muslim folk to Christianity.


I urge you to double (or even triple check) whatever you are going to say about Islam. Ask a Muslim scholar to go through the material before you present it.


Nabeel, recently we have rebuked your former colleagues for their ludicrous attempts to convince people that Islam is racist. Nabeel, you know Islam and the Prophet Muhammad are not racist. Any reputed scholar (Muslim or non-Muslim) will tell you this. You know this Nabeel. Yet your former colleagues in missionary work, in their desperation at the number of African-American brothers and sisters who are leaving Christianity for Islam, decided to go the dirty and dishonest route by alleging racism.


You can view both parts here:


Nabeel, I looked into the archives and it appears that you too (in the past) espoused such intellectually dishonest smears too (either deliberately or through your own ignorance of Islam). Here is a screen shot of your comment from 4 years ago where you erroneously spin it as  'raisin head': 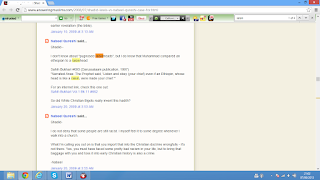 I hope you have matured and will not be presenting such unscholarly internet hate claims to anybody in your audience or class. In the second comment, it’s clear you do not approve of others importing the allegation of racism on Christianity. You should be consistent and never falsely import such an allegation on Islam. Your former colleagues should practice such consistency too.


Nabeel you should know, as anybody who wants to teach Islam should know:


From Prophet Muhammad we realise racism is 'ignorance'.

Muslims believe there were black Prophets (in fact Prophets of every skin colour) as Allah (God) sent warners to every nation.

Prophet Muhammad had many black friends (who are loved in Islam), approved marriages between Black and Arab, the first muezzin (caller to prayer - which is a very important and honourable role in Islam) was indeed a black man (Bilal) and the Prophet's nurse was Abyssinian (Umm Aymen)

Did Paul have any such relationships with black people? Did Mark, Matthew, Luke and John ever meet a black person never mind befriend and love them (like Prophet Muhammad did)?

From the New Testament, The Ethiopian eunuch seems to be the first black person to become a Christian - at the hands of Philip [Acts 8:26-40]. There are very few details about this man. In fact Philip disappears after the Ethiopian's baptism.

For me, this is another sign that Prophet Muhammad (p) is indeed the Last Messenger of God. Surely the last Messenger of God would have had such fine teachings concerning race and relations with black people especially since they are indeed generally the most victimised when it comes to race in the history of mankind.


Here the discussion on the narration Nabeel was referencing (I hope Christian missionaries will desist from their agenda to dishonestly spin in order to smear:

Actually, if people stopped to think they would realise this hadith shows the opposite of racism and even destroys racism against our black brothers and sisters. Think about it, the hadith is telling you that you must obey your leader regardless of his colour. From it we derive that there is nothing wrong with black people assuming leadership roles. In the Christian West black people have really struggled against institutional racism and are still struggling against it today, yet here roughly 1400 years ago we have the Prophet of God destroying institutional racism.

The fruit of Islam is black imams, scholars and leaders as well as inter-racial marriages and mixed race children. Do these folk even know that one of the imams of the Grand Mosque in Makkah is black. Let me put it to you again, the imam of the holiest place in Islam is black (Sheik Adil Kalbani). It’s through Islam that black people are allowed to flourish and have flourished in the past. Here are a couple of quotes from an interview with the imam:


“Our Islamic history has so many famous black people,” said the imam, as he sat leaning his arm on a cushion in the reception room of his home. “It is not like the West.”
“Any qualified individual, no matter what his color, no matter where from, will have a chance to be a leader, for his good and his country’s good.”

Going back to the hadith, Shadid Lewis (a black American convert to Islam) explains the hadith in the video. The likening to the head as a raisin was descriptive and had no intention of racism. As Shadid Lewis points out, some Afro-hair can appear in the likeness of raisin/s with tight curls. My personal view is that this comment differentiating or specifying  the Ethiopians based on their appearance may have had something to do with the class divide in Ethiopian societies (as well as the societies that had Ethiopians residing therein).

We know was a kingdom at that time so there would have been a class divide - the lower class Ethiopians may have had their hair in a certain style that was likened to a raisin. Another interesting point, Shadid also points out that the Hadith mentions Ethiopians and not black people specifically.

However, the main idea one comes away with once thinking about the hadith and all the excellent work Prophet Muhammad did to fight discrimination against black people is that there was no racist intent in the comment at all and it is a comment that opposes racism.

We have a statement (the hadith) which is destroying institutional racism yet mischievous Islamophobes (many of which are Christian missionaries desperate to prevent black Christians from converting to Islam) have disingenuously presented it as a racist hadith.

Perhaps the negative and deceptive spin these two Christian missionaries put on to this hadith reflects some sort of anti-black prejudice on THEIR part!

Anybody with any sort of scholarship and/or insight into Islam will know Prophet Muhammad was not racist.

Would you like to learn about Islam or even convert to Islam? See here:
http://www.thedeenshow.com/
Posted by Yahya Snow at 13:27

I don't know any famous black converts to Christianity

Nabeel qureshi and ravi zacharia live in a well of their own and they mislead and lie....they dont habe the balls to.debate with renowed islamic speakers....they live a fake life misleading people and converting them...