I am officially asking for C.L. Edwards to publicly repent for his sleazy behaviour on Bassim Gorial's Christian Satellite TV channel. C.L. Edwards is asked to apologise to Muslims, apologise to Bassim and Haifa Gorial as well as to the Christian viewers who he made feel uncomfortable with his sleazy remarks.

It's bizarre that this man is calling Muslims to Christianity yet is unable to refrain from making sleazy remarks whilst on camera. 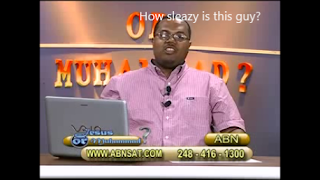 C.L is your sleaziness a product of the anti-Muslim Christian company/colleagues you have chosen to keep? I bet you were never speaking like that in front of Muslims when you were hanging with Muslims.

C.L Edwards, I invite you to repent and become a Muslim. Please realise I am condemning your actions, mannerisms and the company you keep - not you as a soul.
Feel free to email me:yahyasnow@yahoo.co.uk

C.L if you are unsure about which lewd comments this post refers to, please see:
http://thefactsaboutislam.blogspot.co.uk/2013/06/sleaze-on-abn-dr-bassim-gorial-called.html

Muslims have least sex outside of marriage
Posted by Yahya Snow at 10:35

Unless u supply facts this is nothing more than slander. U seriously nred to repent.

The facts are out there. Surely C.L Edwards knows about the sleaze he spoke...

Then I can just say you are guilty of being a sleaze. The facts are out there.

Muslim accuses Christian of something but will not say what the christian did, he or she is just supposed to know.

Another classic example as to why Islam is just so wrong.

Snowman at least tell us what ABN show and date CL allegedly said something sleezy.

If not then you are just a slandering sleeze

radical hater, you are slandering sleeze here n there n get banned everywhere..

Worship God, as Jesus did..

If you are going to comment, please don't insult Islam.

Snowman when did I insult Islam?

Stop playing the victim. If somebody says something about you, don't insult their religion.

I know you are sleazy. In fact I heard you make sleazy comments about females on ABN a couple of years ago.

I don't know if anon has any examples but my example is from a couple of years ago. Perhas you've changed your ways. I don't know.

However, the important thing here is to stop your insults of religion and just either refrain from commenting or comment in a manner that is acceptable.

PS I am in the throes of writing a review for Osama's debate and asking Dr Bassim Gorial to apologize. Please stop wasting my time with silliness.

BTW a link to C.L's comments has been added to the post.