It's late but as promised to Jonathan - here's my response to Jonathan McLatchie and his bout of Islamophobia. 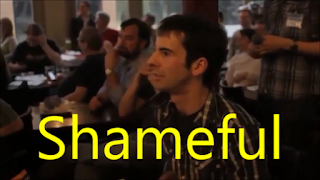 What do they call a bloke who presents British Jews as a fifth column, pretending to be peaceful, waiting to swell in numbers so they can bomb, fight and ultimately persecute us? Anti-Semitic, right?

What do they call a bloke who presents Black Britons as a fifth column, pretending to be peaceful, waiting to swell in numbers so they can bomb, fight and ultimately persecute us? A racist, right?

What do you call a bloke who does likewise to the LGBT community in Britain? A homophobe?

What do they call a bloke who presents British Muslims as a fifth column, pretending to be peaceful, waiting to swell in numbers so they can bomb, fight and ultimately persecute? Islamophobic, right?

If you follow that level of consistency then Jonathan McLatchie of Newcastle University made Islamophobic comments.

Jonathan presents in St. Timothy’s Parish Church, Middlesbrough (UK) presents his theory about British Muslims and indeed all Muslim communities in the EU which labels Muslims as sneaky fifth columns who will sooner or later become progressively more violent (including becoming terrorists) and then ultimately ‘persecute’ and ‘subjugate’ NonMuslims. In this video I used a clip of Cambridge University’s expert on Islam to correct Jonathan’s misinformation about terrorism in Jihad. As for his theory, it’s hateful lunacy that he borrowed from an American right-wing extremist known for attacking Muslims with a history of psychological problems and a violent past. Not exactly the type of person one would go to in order to acquire balanced and accurate information.

Click here to watch the video of Jonathan McLatchie's Islamophobic comments in which he represents Muslims in Britian (and the rest of the West) as a dangerous fifth column waiting to become terrorists and persecutors of Christians. Try telling me he did not get that hateful propaganda from an American Christian extremist with a history of hatred, violence and psychological problems.

Now, I'm confident all fair-minded folk will recognise that those comments are Anti-Muslim and Islamophobic in nature. Comments which have no place in our country (UK) and indeed anywhere in the world. Comments which only serve the purpose of inciting fear, distrust and even hatred of Muslims. I'm confident Jonathan, in quieter moments of reflection, will recognise this too.

Rather than simply lampooning Jonathan McLatchie for anti-Muslim comments we must try to ensure a positive comes out of this sorry episode. I think we should all encourage Jonathan to make a public retraction, apology and offer a sincere gesture of a desire to understand and befriend Muslims. So after apologising and retracting his comments perhaps Jonathan could arrange a visit to a local mosque/Muslim community centre. That would be a great way to build understanding, bridges and community cohesion. I'd highly encourage this - I am willing to help set it up.

Jonathan would also be advised to send communication to the church in which he made those inflammatory anti-Muslim comments to help militate against dangerous misperceptions of Muslims building in the Middlesbrough area - we certainly don't want the Christian extremist group, Britian First, marching there and taking advantage of such misperceptions. Jonathan would also do well to remove his video from the internet as I hope he does not want such inflammatory comments being heard by others.

Jonathan is foreign to the North of England. I'd imagine he does not know some towns/cities in the North are like  tinder-boxes and it really does not take much provocation, incitement to hatred or demonization to get things literally kicked off. The Christian extremist group, Britain First, look to take advantage of such propaganda being injected into these communities.

Jonathan and the 'sharia controlled zones' in Europe hoax

He's renounced this anti-Muslim hoax. Well done to him. I hope he gets communication over to the church in Middlesbrough so folk are edified in this regard. We don't want the audience members spreading that propaganda while believing it to be true because they heard it in a church from a Christian speaker.

Jonathan in his response did not touch on his anti-Muslim misrepresentation of Musims as a fifth column waiting to become terrorists and persecutors of Christians. He instead chose to talk about somebody's comment labelling him a racist. Talk about tackling the crumb instead of the biscuit. I guess that speaks volumes in telling you he has no defence nor justification for his comments. Just patiently waiting for his retraction...

I think that's sufficient in addressing the Jonathan McLatchie Islamophobia episode. I don't want to invest much more time on this.  I'll leave you with some passionate comments which were directed at him closer to the event - a lot of relevant and valid points.


Firstly, as a British Muslim I don't take kindly to hate speech against our community. Yes, you did present hate speech and you did present lies about us (knowingly or unknowingly). You did it in the north of England, where I was born and raised. I don't take kindly to anybody presenting us as a fifth column who pretend to be peaceful at first, then resort to terrorism and ultimately move on to 'persecute' Christians. That's the type of claptrap you were presenting in the north of England. You're from Scotland, so you're an outsider coming to our areas and injecting hatred and fear-mongering. Whether you did it knowingly or unknowingly, that's what you did. Accept responsibility for your words. You did stuff of a similar nature with your American Islamophobic buddy in the radio clip.

...you specifically blocked me after firing loads of right wing links at me on your page which you claimed propped up your view of 'Sharia governed no-go-zones'. Links which turned out to be of no support to your claim whatsoever. You must have known that. I don't appreaciate games like that.


I'm glad you're looking into the right wing hoax. Not entirely sure why you did not look into it before presenting it in the church. Not sure why you maintained it to be true when pressed on it. You dug yourself in. Time to dig out.

You may not want people to think it, in fact you may not think it yourself but you are an Islamophobe. We've all heard the racist or the bigot say 'I have Black/Jewish/Muslim/Eastern European friends but...' so I don't care if you have Muslim friends. It's all immaterial. What matters here is whether you are making comments of an Islamophobic and inflammatory nature. You are. Nobody is stupid here. You know it deep down IMO. Like I say, nobody is stupid here. Just because your buddies in America say that nonsense and hate-monger against us does not make it true and does not mean you can transfer it to my country. Again, you're from Scotland, what are you doing hate preaching against people in England with your Islamophobic comments? Look up Cable St and its history in Tower Hamlets. The outsiders came into that area to promote hatred against the Jews but on mass the people stood up against it.

Are you going to make a public comment to the congregation of that church about the hoax you presented? Are you going to retract your terrorism claims and those other comments that make us out to be an untrustworthy fifth column waiting to pounce and butcher Christians?

Surely you know those comments can lead to attacks of a physical and/or verbal nature against Muslims. Just remember you Scots were victimized at one stage. Why take part in the victimization of us?

Hypocritical Jonathan McLatchie on Hygiene in the Bible and Ahadith