Is Prof. Bart Ehrman really having such a debilitating effect on Christian apologist James White's to the extent it's waning his desire for serious discernment and consistency? It appears so. Well, more plausibly, it's more like the assistance Prof. Bart Ehrman has given Muslims is really grinding on James' gears (cycling pun intended assuming White has a proper bicycle and not some babyish pushbike or tricycle!).
In his response to Ijaz Ahmad, James abandoned common sense, consistency and basic decency in trying to slander Bart Ehrman AGAIN. Oh yeah, White has a history of attacking Bart Ehrman - he did it out of resentment to paying Bart a load of cash just to be able to debate him and he did it before Bart publicly denounced him as an unpleasant fella  with a string of mean spirited comments towards Bart
So what was his motive this time round? Perhaps it was just an attempt to distance Muslims from Bart Ehrman. James claims Bart disrespects Islam based on him joking his life would be at risk if he wrote a critical book about the Quran. As highlighted in the video - James really should know better as Bart effectively told James the real reason why Bart doesn't write books about the Quran - he has no knowledge about the Quran.
A possible demonstration that Bart is living in James' mind rent-free; James condemns himself in that slander of Bart. James, only a matter of hours after his attack on Bart does exactly the SAME thing as Bart but not in a jocular manner. White was serious when he wrote this in response to Muslims using New Testament Professor JR Daniel Kirk's material:
Notice that Paul Williams identifies Kirk’s liberal meanderings as being “honest.” I wonder if he does the same for liberal interpreters of the Qur’an? I’d love to see him publicly post in defense of unorthodox, liberal interpretations of Islamic theology. Even he knows he would probably not be safe at Speaker’s Corner if he did so—not from danger from Christians, of course, but from his co-religionists!
Facepalm!
And, I wonder if James will be consistent and call out all his wild-eyed buddies who do exactly the same thing - Shamoun and Wood come into mind. In fact, a non-Calvinist Christian missionary James recommends, Jay Smith did the same thing when Justin Brierley pushed him on why we don't get to see all his alleged converts to Islam.
For James White, it appears consistency matters but only when it's not close to your neck of the woods.
Can we have a cheesy Dividing Line type of line? Sure, one of the reasons why I do what I do is because I'm looking for that consistent Christian, to this day I'm yet to find one, I will continue looking for that Christian.
Here's the video highlighting some of the problems with James' attack on Bart Ehrman 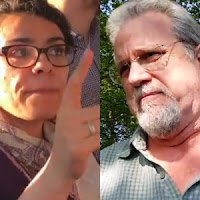 Email: yahyasnow@yahoo.co.uk
Posted by Yahya Snow at 06:24 No comments:

Jay Smith of Pfander Films is the chief advocate of such polemics in Christian-Muslim apologetics circles. One would imagine, to the embarrassment of serious-minded and more scholarly Christians.

Admittedly I don't follow Jay Smith as closely as some but from the Islamic Awareness article, it appears Smith has revised his own theories; back in the early 2000s he used to claim the qibla was in the vicinity of Jerusalem and nowadays he's claiming it is Petra.


Regardless of any shifts in his thinking, his theories fall flat on their face as shown on Islamic Awareness 15 years ago:

Modern studies have shown that in the early mosques astronomical alignments were used for qibla. Astronomical phenomenon such as sunrise or sunset during equinoxes, solstices, Pole star, Canopus, etc. were used to direct the mosques towards qibla. Concerning the early mosques in Egypt and Iraq, David King says:

The first mosque to be built in Egypt was built facing winter sunrise, and it was this direction which remained the most popular throughout the medieval period amongst the religious authorities. Likewise some of the earliest mosques in Iraq were built facing winter sunset. Only recently has it become known that astronomical alignments were used for the qibla, so that some modern historians (sic!) have mistakenly inferred from the orientations of the early mosques in Egypt and Iraq that they were not built to face the Kaaba at all, but rather to face some other sacred site. Now, however, we even know why such astronomical alignments were used


If this video does not play, please see here


As brilliantly outlined in this video by the erudite Mansoor, Smith's conclusions and leanings on the work Dan Gibson and a certain "Dr Theus" are wild-eyed to the point of giving up on critical thinking and intellectual honesty. Smith's theory of Petra being the early qibla (and his subsequent theory of Muslims inventing a new history and role for Mecca after the fact) are based on Google Earth images of mosques. Mansoor highlights the obvious problem in this methodology that anybody who offers it a little thought would recognise; one cannot ascertain the qibla via satellite images of mosques.

One must have knowledge of the interior of the mosque, Mansoor mentions floor plans and the mihrab (a niche in the interior of the wall of a mosque denoting the direction of prayer for worshippers in the mosque). Let me emphasise the methodology of folk like Jay Smith. If I showed you a Google Earth image of your local mosque would you be able to ascertain the direction the Muslims at that mosque pray towards? No, of course not. Smith would have folk believe he can do this for ancient mosques!

As pointed out in the video,"Dr Theus" even criticises the methodology of Dan Gibson and how arbitrary it was in terms of deciding where each mosque's qibla was. One could just as easily decided the qibla was the direction of Hawaii rather than Petra using such a method.

At the end of the day this is an excellent example of how folks with agendas in the revisionists community churn out "research" which is essentially manipulated in attempts to support one's pre-conceived contentions.

Basically Muslims would direct the qibla towards what they observed in the horizon when facing one of the walls of the Kaba. To read about the astronomocal alignments which Muslims were using over the centuries to ascertain the qibla have a read of the relevant section in this article. A couple of take home points here are:

1. As the Kaba has four walls there would have been differences in the way Muslims directed their mosques - you'll use different astronomical alignments depending on which wall of the Kaba you face to observe the horizon

2. It wasn't an exact science and thus finding old mosques which aren't orientated accurately is nothing to write home about. IA do show the most famous mosque outside of Arabia, masjid al aqsa, was oriented correctly towards Mecca.

Another excellent snippet to be alert to would be the leeway the Islamic tradition affords Muslims when it comes to determining the qibla; it doesn't have to be an exact science:

There are several traditions in the Islamic heritage showing that the determination of the qibla was accomodated with some flexibility except for Makkah owing to the little knowledge in the fields of geography and geometry in the early centuries of Islam. Such traditions can be found in several ḥadīth collections like Sunan al-Tirmidhi, Sunan Ibn Majah and Muwaṭṭaʾ Mālik as stated below.

Malik narrated to me on the authority of Nafiʿ that ʿUmar ibn al-Khaṭṭāb said: "[Anywhere] between the East and the West is taken as a qibla as long as one heads towards the House". Source

The Petra conspiracy theory has no evidence to it at all and I'm sure deep down this shamed Christian missionary knows it's absurd - even if he is unable to comprehend what the scholarly Muslim was saying he will surely ask why there is NOTHING about Petra in early Muslim literature and why there was no upheaval and dispute after this supposed shift to Mecca!

So why does he make outlandish claims like these and try to prop them up with faulty reasoning and misinformation? It's because of his agenda to "destroy Islam".