For the last couple of days at least it's become a regular theme on Facebook where Jonathan McLatchie has been challenging Yusuf Bux to debate while refusing to debate Ijaz Ahmad of Calling Christians.

Jonathan had an opportunity to debate Yusuf Bux in South Africa. The organisers messed Yusuf around - Yusuf was up for a debate back then. If Jonathan really wanted to debate him he and his organisers they would have made it happen.

From what I recall from Yusuf, the organisers made it very difficult for Yusuf. He eventually walked away as he felt he was being messed about. I and he suspect they made it difficult for Yusuf because Jonathan's organisers felt Yusuf Bux would connect with the live audience much better than Jonathan and Jonathan's eventual opponents. Were folk like Brian Marrian and Rehan Khan lacking confidence in Jonathan hence why Yusuf Bux (an experienced public speaker) was not selected? It's all speculation now. 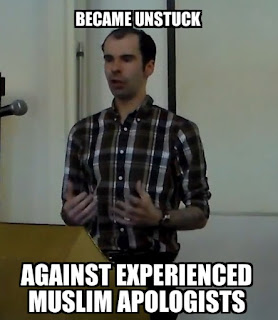 I have a great deal of respect for Yusuf Bux, he is passionate in reaching out to Christians in South Africa. He and his family have been working tremendously hard and resourcefully in propagating Islam and helping Muslims.

Yusuf is a public speaker. I don't think he styles himself as a debater. He delivers talks in churches and mosques concerning Islam - primarily on pure Abrahamic monotheism. He tries to communicate to the average Christian - the lay Christian - so he simplifies his argumentation. He chooses not to get involved in overly technical and philosophical discussions. That's his prerogative.

Now I must say, it's curious to see Jonathan angle for a debate with Yusuf Bux after he intimated Yusuf's arguments are dated and weak. Admittedly, I do have reservations about some of the arguments that do come out of SA. Nevertheless, the point here is why would Jonathan decide to target Yusuf for a debate while Jonathan continually avoids Ijaz Ahmad's debate challenges. Ijaz is a hardened apologist and debater who chooses to involve himself in technical discussions about Christian theology - it's what he specialises in.

You see, Jonathan has come off really poorly in his interactions with experienced Muslim apologists. He struggled in his debate with Shabir Ally and struggled in his debate with Yusuf Ismail. Ijaz Ahmad and myself have corrected him and refuted him on many points over the last few months - at times on some very basic stuff highlighting his inability in dialogue with Muslims who are more experienced and aware apologetically. [NOTE: Just so pride does not kick in, Jonathan hasn't struggled because he is not smart or somehow deficient - it's because he is supporting obviously flawed ideas such as the Trinity and Bibilcal inerrancy.]

Debating people who struggle with English and who aren't involved in apologetics deeply is one thing but it's a totally different proposition to debate somebody who is hardened and aware apologetically. Something Jonathan has learned the hard way.

Jonathan, Ijaz Ahmad is waiting for you to agree to debate him. Whilst he is waiting, how about you stop asking Yusuf Bux to debate you. I understand you have been under the mentorship of Sam Shamoun - he has been avoiding YT debates for years now. He knows he will struggle in such a debate arena hence his avoidance.

Some past responses to Jonathan McLatchie

James White: Show Me Where Prophet Muhammad Said He was the Last Prophet p