Jay Smith specifically claimed he had video evidence to back his shocking claim up. He's being asked for that video footage now!


I've looked for the video evidence which he claims is available on the internet. I can't find it. All I could find is him talking about the third caliph who burnt Quranic manuscripts


This is odd. He claimed 40/50 Muslims said it was OK to kill random people upon seeing some Christian burn a copy of the Quran and they all threatened to kill him if he burnt a copy in London.

Posting footage of all this would be propaganda gold for him, his organisation and his friends (the David Wood types).It would go viral. Where is the video of this purported incident?

Jay Smith of Pfander Films has a reputation for dishonesty. Did he make this up?

If the video does not play, please see here

This is a transcript of one of Jay's versions of the story:

Just yesterday, in fact, I was at Speaker's Corner, and I got up there, and I don't know if you remember what happened of Friday. Nine U.N. soldiers were killed after some of the imams in the mosques there in Mazar-i-Sharif in Afghanistan remonstrated against Terry Jones who had burned the Koran, I don't know, a week or two ago down there in Florida, and crowds went on a rampage and killed nine U.N. soldiers, wounded eleven others there in Mazar-i-Sharif, and these U.N. soldiers were from, well four of them were from Nepal. They wore burkas. One was a Swedish. Two of them were beheaded.

Of course, I got up on the ladder and I wanted to bring this—and this is what we do—I get up and take what's on the news and I bring it around to the Gospel. I just got up there and said, 'Listen, you all heard the news. You all heard what happened. What in the world went wrong, and why are you Muslims killing people for your Koran? Why in the world nine young men, or whatever their ages were, why did you kill nine men who had nothing to do with the burning of the Koran that took place thousands of miles away over in Florida by a pastor who did something he shouldn't have done. Nonetheless, why do you kill people for doing this?'...

...Now, bringing that kind of thing at Speaker's Corner brings a huge crowd, and I had a huge crowd yesterday. Hundreds were there, and the Muslims came all front and center, right in front of the ladder... And then I asked, 'Should those men have been killed? Should those nine men have been killed, though they had nothing to do with the Koran? They didn't even know Terry Jones. They are hundreds, thousands of miles away.'

And what was fascinating, Brian, as I said that, about six or seven Muslims started raising their fists and yelling, 'Yes! Yes! Allahu-akbar! These men should be killed.' So I said, 'Do you all agree?' All the Muslims, there may be about 40 or 50 Muslims there... 'Do you all agree?' And almost all of them said, yes, those men should be killed.
So I turned to the crowd. The crowd was huge, and you could see the horror on the faces of the crowd. It was priceless from where I was standing to look out and said, 'Are you watching this? Are you looking at this? ... Not even looking for the guilty party or if anybody is even guilty. Nonetheless, they would kill anybody. I said, 'Why is it they should be killed?' Because they weren't Muslim.
Now that you can only do at Speaker's Corner. You can only get that kind of reaction at Speaker's Corner. And then you also can only get those kinds of crowds, and so we film it. We put that—that one, unfortunately, the fellow that does all the filming wasn't there, so that didn't get on film, although the same thing happened back in July when Terry Jones was going to do the same thing, and I did much the same kind of talk back in July. That got filmed and that's up on YouTube. You can go and see it. 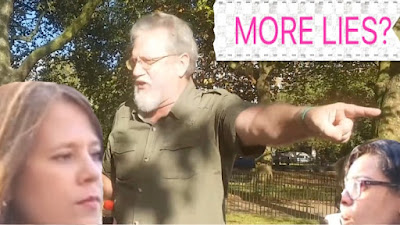 He can quite easily disprove any suspicion of dishonesty on his part by providing the footage seen as he claims he has all this on video. The challenge has been set for him to provide the video footage.

If it turns out to be the case, we have no qualms in rebuking and educating the Muslims in question. But it seems awfully suspicious that this missionary does not have this footage uploaded.

And if you're a Muslim, don't take this type of thing lightly. Don't dismiss it as standard Christian missionary propaganda. This Christian polemicist's audience, given the type of anti-Islam/Muslim rhetoric they produce, will be jam-packed with Britain First, EDL, racist types and Islamophobic fundamentalist Christians. A bunch of folk who have a scary violent element to them.

What do you think will happen when they are told there's a bunch of Muslims in London who think it's OK to kill random people when they see Christian pastors on TV burning copies of the Koran?

It's going to feed into the fear narrative which will lead to more Islamophobic cowards attacking Muslim women and Muslim old men in Britain.

These are dangerous lies helping to further jeopardise Muslim safety and wellbeing in Britain, America, Australia, Canada and beyond.

If Jay Smith can't provide the video evidence then for this then it would appear he was peddling extremely irresponsible and dangerous lies.