A Christian missionary called Lizzie was talking about the Pakistani Valentines Day ban which has been reported in British news outlets recently.

She seems to be encouraging Pakistanis to celebrate Valentines Day. Lizzie begins by writing:

Don’t you love 14th February? The cheesy commercialism, the overpriced meals, the vast teddy bears exchanged by teenagers and re-patriated to the charity shop by the end of the week? I know, I’m such a romantic! In my house, you might get a homemade card and a nice gesture, like taking the rubbish out. Here’s the thing though: if you want to buy a dozen red roses and waste helium on a heart balloon, be my guest. You’re not prohibited from doing so. Unless… you live in Islamabad.

What else are these boys and girls buying aside from teddies and roses? Condoms. Condom sales increase around Valentines Day. Why do you think that is, Lizzie? You don't get a prize for guessing correctly, and nope, they aren't buying them because the balloons have sold out!

For those unaware, the modern phenomenon of Valentines Day is not some harmless, fun day where teenagers exchange cuddly toys. 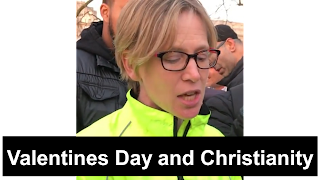 Lizzie, the Christian missionary, goes on to encourage Pakistanis and others to get involved in Valentines Day (maybe she runs a stall selling Valentine Day cards or something!):

.. to all my readers, but especially in Islamabad – if I have any, I’d love to hear from you – Happy Valentine’s Day! I hope that this ban is widely ignored, and that you stay safe if you choose to defy it. And if you’re not in Islamabad – let’s not take our freedom to celebrate days like these for granted, however fluffy and pointless they might seem to us.

The question here is why is a British Christian woman promoting Valentines Day? She surely knows, through experiencing life in the UK, that Valentines Day comes rife with elements that are antithetical to religious values.

Well, considering the ban has popular support amongst the natives over there in Pakistan it seems even more strange for Lizzie to be encouraging the flaunting of the ban – over 80% of those polled agreed with Islamabad’s High Court ban on Valentines Day.

Why would a Christian missionary want to see societies that are purer sexually than ours become marred with the same problems that come with Valentines Day? Does the Bible not matter to these people anymore, is it more about cultural imperialism than religious values?

Has Lizzie, the Christian missionary forgot this verse is in the New Testament:

But I tell you that anyone who looks at a woman lustfully has already committed adultery with her in his heart.

But there’s more. More in elephantine proportions. The elephant in the room.

Why do you think people in other cultures are against Valentines Day? It’s because they are against the enticement to have sex-before-marriage. That's the unpleasant baggage that comes with a society celebrating VD on mass. This Hindu spokesman for a group in India opposing Valentines Day says it as it is – premarital relations are the issue:

"If you are in love, you should get married," said Ashok Sharma, vice president of Hindu Mahasabha, a conservative Hindu religious organization with branches across the country. "Roaming around in public without marriage does not fit in Indian culture. If we find such young couples, we will get them married off." [Source]

Saudi Arabia, India and Indonesia (all countries which have been in the press for opposition to Valentines Day) have the lowest rates of children born out of wedlock (1% or less).

Now compare that to the Britain where it was reported in 2013 that over 50% of all babies will be born out of wedlock in less than 5 years time. That’s the “Christian” country of Britain. Yet you have British Christians telling Pakistanis that they should be celebrating Valentines Day in their country. Weird!

It gets odder still. The countries with the highest rates of children born out of wedlock are historically Christian countries:

The highest rates of non-marital childbearing occur in Latin America (55–74 percent). The only other countries to share these high rates are South Africa (59 percent) and Sweden (55 percent). The range within Europe is huge: from 18 percent (Italy) to 55 percent (Sweden). Those in North America and Oceania are also high and rising, though New Zealand (47 percent) and the United States (41 percent) stand out, with more than four out of ten births outside of marriage in these two countries. [Source]

Notice which countries have the highest rates of children born out wedlock? “CHRISTIAN” countries!.
I’d seriously encourage Hindus and Muslims in the East to carry on with the pushback against Valentines Day regardless of criticism from Christians and the press in the West. The fact is, they all know your societies are sexually purer and we are living in guilt and sin as our society has downgraded marriage and mocks sexual purity. We’re all suffering the consequences of our society's failings and our weaknesses.

And let’s talk about abortion. Inevitably all this sex outside marriage is going to have an impact on the abortion figures. I’m not going to be simplistic or insensitive here (Christian missionaries take note!), there are a number of reasons why women choose to have abortions however a lady is 17% more likely to have an abortion if she is not married.
We see some evangelical Christians posting memes on Facebook about abortion but if you really want to make inroads on the fight against abortion you should preach against sex-before-marriage.

Every year 200,000 Bible-believing Christian women have abortions. There’s going to be a number of reasons for these women making the decisions they do but if about 20% of these ladies are having abortions because they aren’t married then that is about 40,000 American Christian women annually having abortions simply because of the sexually impure culture we live in in the West.

Given the total number of abortions each year in the US is over a million that means the figure of ladies simply aborting their child due to them getting pregnant out of wedlock is 200,000. 200,000 American babies aborted simply because of sex outside of marriage!

In England and Wales, based on the 2014 figure of 185,824 abortions, that would mean more than 30,000 babies are aborted simply because of sex outside of marriage every year.

Now you do the maths for every “Christian” country in the West and its abortion figures based simply on getting pregnant outside of marriage.

Christian missionaries can try to mix Western cultural imperialism with evangelicalism but smart people will be able to spot it a mile off.
Western Christian missionaries really need to stop wasting their lives preaching what would be deemed immorality to people in sexually  purer societies on the other side of the world. Lizzie, and other evangelicals, should be inviting those Pakistanis, Saudis, Indonesians and Indians over here to help improve "Christian" society!

And considering a growing number of evangelical Christians are taking to the anti-Muslim propaganda game why is it that Muslims having the least sex outside of marriage according to this survey? 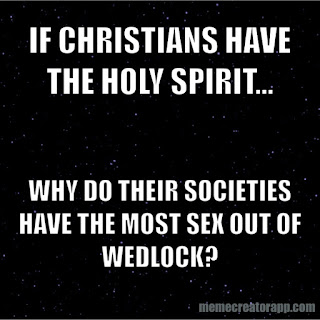 The "Council of Nicea and the Trinity" Myth Refuted