We had to rebuke David for a video which he made using Nabeel Qureshi's last recorded words to attack the Prophet Muhammad, I hope serious-minded Christians will rebuke David too. 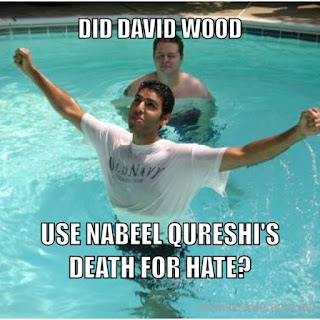 In David Wood's video he cited a hadith of Prophet Muhammad cursing people who take the graves of Prophets as places of worship. He misrepresented this. This is obviously out of concern for keeping Monotheism intact. This shows the value the Prophet had for pure Monotheism. He used some of his last words to remind people of the importance of pure Abrahamic Monotheism and help them keep away from shirk (a departure from pure Abrahamic Monotheism) - making places of worship over the graves of Prophets could be seen as leading to shirk.

The Prophet Muhammad's (pbuh) curse on the Jews and Christians was not his last words (just some of his last words), it was not done out of hatred or rancour for them (and it was not directed at all of them), but instead he was relating to those around him his utter rejection of people worshiping prophet's graves. (i.e. indirectly telling them not to worship his grave.)

The Jews (and Christians!) are taught about pure Monotheism and its importance in the Bible. First Commandment that all Jews accept: Ex 20:3 “You shall have no other gods before[a] me".

The Prophet, amongst his last words, also reminded people to be spiritual and never forget the prayer: “The prayer, the prayer! And fear Allaah with regard to those whom your right hands possess.”
As for the Prophet's grave, here is a link to what the scholars say on this - it is clearly not a curse against Muslims who pray in that mosque!:
https://islamqa.info/en/65944

David also mentioned Jesus and his purported last words. Firstly, as Christian scholars admit that the Gospel authors are not reliable and the Gospel of John puts words into Jesus' mouth that he never actually said it's highly dubious for David Wood to talk like he knew what Jesus' last words. See this video of a Christian scholar admitting this about John's Gospel: https://www.youtube.com/watch?v=c0zkTTNGJLQ

David also makes out he believes in a Jesus who is all about peace and love. Actually, Trinitarian Christians believe Jesus allowed the severe beating of female slaves as long as they got up in a couple of days and they believe he used and will use violence, David Wood's Hypocrisy on Jesus' Violence According to the Bible: http://thefactsaboutislam.blogspot.co.uk/2017/06/david-woods-hypocrisy-on-jesus-violence.html

For the David Wood refutation section see here for over 70 rebukes, refutations and responses to him (scroll down and go to older posts to see the earlier ones):
http://thefactsaboutislam.blogspot.co.uk/search/label/David%20Wood

This video has also been uploaded here and here

David Wood may think he was just going toe-to-toe with trolls who were winding him up about Nabeel Qureshi with insensitive comments but he just played right in to their hands. Trolls exist on the internet. Don't play their game of hate and mockery.

Paula Fredriksen: Paul was NOT a Trinitarian
Tovia Singer: Does the New Testament Teach Jesus is God?