Response To A Christian Blog on Muslim Girls School in Stoke

Archbishop Cranmer (blog) got my goat with the following comments in his piece entitled ‘A school for Muslim girls that forbids them the use of toilet paper ‘for cultural reasons’?’:

I understand Stoke-on-Trent is shortlisted to be named a ‘City of Culture’. Ah, but which culture? It is disconcerting to hear of a school for Muslim girls that forbids them the use of toilet paper ‘for cultural reasons’. Soap, too, is off the menu, so the poor dears have to ablute the Karachi way. One wonders if the school provides proper toilets, or simply issues the girls with a trowel and points them towards the shrubbery? So much for all cultures being equal, for indeed some are more equal than others. At least inspectors have deemed the school to be ‘inadequate’, which should send leftists spinning and surely counts as a ‘hate-crime’. 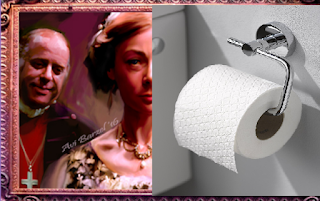 I wonder if Archbishop Cranmer wrote this whilst on the toilet. I understand he’s using a bit of hyperbole, what is it with irate Christians and hyperbole?

Likewise with one of the rabble-rousers in evangelicalism in the West, not many can do ‘hyperbole’ like Jay Smith.

1. The school in question did not “forbid” the girls from using loo roll. Toilet roll was available, but apparently not put out.

I suspect it’s just a massive oversight and/or a bit of a blunder by the school. I mean, so what if your culture is to wash rather than wipe. Folks who wash rather than wipe also use toilet paper in that process too. It’s a bit foolish to leave toilets without toilet paper even if you have washing facilities. I’ve noticed this in some mosques too — I’ve always suspected, here comes the cynic in me, it was an effort to save money or a subtle way of saying do your business at home rather than here.

2. Calm yourself down Archbishop Cranmer, it’s a school of 34 pupils. It’s hardly representing the overall culture of Stoke on Trent never mind supplanting the current culture. Why are traditionalists at the CofE so bitter? Christianity and “Christian culture” (whatever that is, surely not toilet paper only!) is not being ring fenced any longer thus Archbishop Cranmer, Christian Concern, Gavin Ashenden are all in a bit of a tiff.
This seems to be a regular theme amongst this type of CofE-er. Zoning in on some odd story about Muslims or some other minority culture and making a big hoo-ha about it. Why can’t they shake off that chip on their shoulders?

3. Archbishop talks about soap being off the menu. Hmmm, I don’t think the head teacher said that was due to cultural reasons. Again, I’d imagine it’s just a case of lack of thought if the school had no saop dispensers in the toilets — either that or it was a cost-saving tactic.

In fact, Muslims played a vital role in the development of soap and shampoo was introduced to Britain by….a Muslim!

Washing and bathing are religious requirements for Muslims, which is perhaps why they perfected the recipe for soap which we still use today. The ancient Egyptians had soap of a kind, as did the Romans who used it more as a pomade. But it was the Arabs who combined vegetable oils with sodium hydroxide and aromatics such as thyme oil. One of the Crusaders’ most striking characteristics, to Arab nostrils, was that they did not wash. Shampoo was introduced to England by a Muslim who opened Mahomed’s Indian Vapour Baths on Brighton seafront in 1759 and was appointed Shampooing Surgeon to Kings George IV and William IV. [Source]

The absent-mindedness or the scrimping of the school is hardly to be attributed to their culture. That would be like attributing gay marriage, divorce, sex before marriage or Atheism to Church of Englan culture. Archbishop Cranmer, what say ye?

4. On a personal note, Archbishop Cranmer may want to hit up the head teacher and have a look at his notes on toilet etiquette — it could help him to avoid a fissure or two. As a CofE-er, I’m certain he’s an expert on fissures of a different kind given the CofE are in constant disunity (the mind boggles further if they seriously consider themselves to be the “body of Christ”). Get some lessons on cleaning your derriere as your chosen cultural method is a mover but not exactly a shaker:

5. Archbishop Cranmer asks which culture when talking about Stoke on Trent’s now failed bid for City of Culture status. I guess as a CofE-er he’s used to asking such a question given that the Church worships an Asian man (Jesus), believes in a doctrine from Greek philosophy (Trinity) and relies on manuscripts found in rubbish heaps amongst other places in North Africa to help reconstruct its book (the Bible) by the academy which is largely a Western enterprise. Indeed, Archbishop Cranmer, which culture?

Dr Adrian Hilton, do us a favour mate, edit some of this into Mrs Proudie’s article. Consider my thoughts the water to wash away the hyperbole. Don’t forget to wipe!

Queen James Bible and the Islamophobes