Thoughts on Paul Williams' Debate on Slavery With a Christian Lady

Paul Williams entered into a dialogue about slavery and had a mini-debate with a Westernised Christian lady who seemed reluctant to want to discuss the topic with Paul Williams. The discussion can be viewed on the SC Dawah YouTube page in a video entitled Biblical Problems: Paul vs Lizzie

Paul gave the Westernised Christian lady an equally difficult time to that which Hashim recently gave her on Numbers 31. I do feel it's noticeable that the Christian lady is being more mindful of allowing the other person to speak and thinking about how she's being perceived, it's a good thing. There has been a marked improvement. Well done!

Before discussing a couple of interesting Bible verses Paul Williams raised, I want to pull the lady up on what appears to be a low-level polemic which I corrected a while back. The Hadith of Prophet Muhammad rebuking somebody for hitting a slave whilst smiling is sadly being misused by Christian polemicists as an endorsement of beating slaves. This is intellectually dishonest.

I've addressed this subject previously in this video. Folks, honest reading of texts is more praise and respect worthy than manipulated readings geared towards low-level polemics and mud-slinging contests. Sincere Christians should think about this.


Do you believe cruel slave masters must be obeyed?

Paul Williams raised the following eye-opening reference from the New Testament. Quite often we expect this type of passage to be limited only to the Old Testament, it' a difficult passage.

18 Slaves, in reverent fear of God submit yourselves to your masters, not only to those who are good and considerate, but also to those who are harsh. 19 For it is commendable if someone bears up under the pain of unjust suffering because they are conscious of God. 20 But how is it to your credit if you receive a beating for doing wrong and endure it? But if you suffer for doing good and you endure it, this is commendable before God [1 Peter 2, NIV]

The lady did try and suggest this was referring to servants rather than slaves and also includes professionals in employment like doctors and lawyers. I don't think this cuts much mustard, look at verse 20, it's talking about receiving beatings. One would expect beatings to be meted out to slaves, not private contractors who you hire. Coupled with Exodus 21:20-21 where TCVO Jesus allows the severe beating of female (and male) slaves as long as they got up after a day or two this is a difficult subject, especially for Westernised "Christians" - the type who get their morals from Western liberal societal norms rather than the Bible.

The New Testament does not say slaves should be freed

Now, this was an interesting claim which Paul made. Food for thought.

I'd like to see this topic explored further. I'm not sure if there is a Christian at that park, with the necessary discipline to stay on the topic, who is willing and able to discuss this topic with somebody like Paul Williams. Perhaps there is and we will se a video of such a discussion emerge on the net in the next few months.

A few points to consider here:

1. I don't get this point. I don't understand why this is a big deal as Prophet Muhammad's slaves weren't all owned at the same time, they were freed and he encouraged the freeing of slaves. Slavery was embedded in society at the time so for the Prophet of the community to be an example in freeing slaves would have had a positive pedagogical effect on others:

2. Does this lady not actually believe Jesus got 32 virgin girls given to him as a tribute? In Numbers 31, thirty two virgin girls were given to the LORD (for this lady, the Lord is TCVO Jesus), were these not slaves or does the lady believe the Midianite girls chose to be given to TCVO Jesus

3. I guess this is part of the mindless emotional fluff we see so often where evangelical "Christian" people selectively compare certain instances in the life of Prophet Muhammad who was running a state with the Jesus of the New Testament who was a citizen and never had any state leadership responsibilities.

On top of this, Trinitarian Christians believe Jesus is God, why are they trying to compare a man they believe to be god with a Prophet? Bizarre. It's not only us who have picked up on this, Christian authors like Thom Stark write about it, equally perplexed:

...since Christians believe that Jesus is God, and Muslims believe that Muhammad was a human prophet, it is patently unfair to try to measure Muhammad against Jesus. Much more appropriate would be to measure Muhammad against Moses, and if Copan were to do that, guess who would be the shining beacon of light? Well, it wouldn’t be the elder of the two states-men. For one thing, Muhammad condemned the slaughter of noncombatants, women and children. Second, he embraced religious tolerance and believed that Christians, despite some theological flaws, were God’s people too, only with imperfect revelation. Moses, on the other hand, ordered and engaged in the slaughter of noncombatants, women and children, on a routine basis, and advocated for anything but religious tolerance.﻿ [Thom Stark]

I can't imagine this lady making such arguments against Moses?

I guess it's just another example of what Paul Williams described as throwing the Bible under the bus and opting for secular Western liberalism. I always find it difficult to understand exactly where this lady is coming from, at times she sounds like a British culturalist, at times like a Westernised watered-down "Christian", at times like a secular liberal, at times like a Daily Mail reader and at times like a radical feminist. The  times she does sound like a Bible-believing Christian she shocks people with comments about her belief that Jesus will return with a SWORD for the "enemies of Christ" (all non Christians, including women I suppose)

“Sex slaves”? What is this loaded and utterly misleading term that so many people engaging in low-level polemics are using about Islam. Islam does not have a concept of “sex slaves”. “Sex slaves” are not allowed in Islam. I’ve got an important discussion on this subject here where Christians opt to use the word “concubine” when talking about their tradition but for Islam they, for some reason (anti-Islam propaganda) spin it to “sex slave” when talking about the Islamic tradition. Let’s be honest and fair with our terminology. It’s actually concubine for both religions. “Sex slave” is something completely different and it skews the audience’s understanding if they are not switched on.

Let everyone be subject to the governing authorities, for there is no authority except that which God has established. The authorities that exist have been established by God.

There are a few difficulties for the Christian which stem from thinking about this Bible verse.

A big issue here I notice arising from Paul of Tarsus' myopic vision and his inability to envision a church (not his church as he was not a Trinitarian and nor did he have the same Bible as the Christians of today) would still be in existence 2000 years after him and that church would have had governance of Rome as well as other lands (many of which he would not have known existed).
Due to his myopia, he never instructed Christians in governance and never instructed Christians in how to govern a land based on biblical principles and laws. Christians believe God gave laws on how to regulate a land (a theocracy) in the Old Testament yet for some reason there is nothing similar in the NT but instead we see an encouragement to subservience of (pagan?) rulers, no matter how cruel and unjust they are. State governance based on social justice does not seem to have been on Paul of Tarsus' mind. This is all because Paul of Tarsus did not envision his religion and community to last long. Little did he know that a church would have saved some of his letters (not all of his letters), designated them "inspired by God" and put them in a canon to add to the Hebrew Bible alongside some other written documents including four "gospels".

I really don't think Paul of Tarsus would recognise the Christian lady in the park to be a follower of his.

And I'm absolutely certain the historical Jesus would not consider her to be a follower of his.

Geza Vermes speaks of Jesus as a ‘lover and worshipper of his Father in heaven’ , whose transformation into an object of worship ‘would have filled this Galilean Hasid with stupefaction, anger and deepest grief’ (Vermes 1983:13) [Cambridge Companion to Jesus Edited by Markus Bockmuehl – Cambridge University Press – 2001] 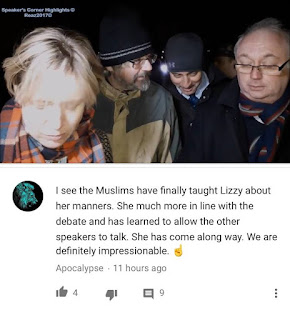 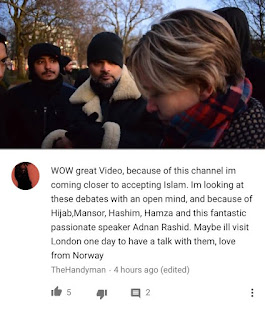 Jay Smith, Did John Write Down What Jesus Said?

Missionaries Misusing the Hadith: Sins On Jews and Christians


Christian Inconsistency Around Arguments for Prophet Muhammad in the Bible
Tovia Singer: Does the New Testament Teach Jesus is God?