Should we blame the religion of Christian for this abominable act? As Muslims we have a right to uphold the truth, therefore, our answer is no. However, what if these Christians were Muslims? Have a gander at the article below: 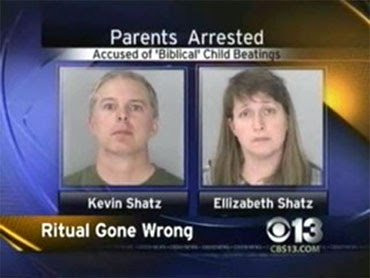 (CBS/KOVR)
CHICO, Calif. (CBS/KOVR) Three years ago, Kevin Schatz and his wife Elizabeth did something so noble, a local television station featured them; the pair decided to adopt three children from Liberia. Now, they're accused of killing one of the children because she mispronounced a word.

Apparently, they got the idea from a fundamentalist Christian group, which promotes this as a way of training children to be obedient.

Butte County District Attorney Mike Ramsey says for several hours the 7-year-old was held down by Elizabeth and beaten dozens of times by Kevin on the back of her body which caused massive tissue damage.

"It was torture," says Ramsey.

Another 11-year-old adopted child was allegedly critically beaten for "being a liar and a bad influence on the 7-year-old."

The District Attorney points to a book written by a Tennessee evangelist named Michael Pearl, who the Schatz's have told police they were following.

Pearl's website, nogreaterjoy.org, suggests "A swift whack with the plastic tubing would sting but not bruise. Give ten licks at a time, more if the child resists."

"This is not a good ole' fashion spanking, it certainly is way beyond that," says Ramsey.

The alleged beating happened on a piece of property in Paradise, Calif., where the three adopted children and the Schatz's six biological children were homeschooled. Paradise is 90 miles north of Sacramento.

The family rarely left, and they even grew their own food there.

If convicted, Kevin and Elizabeth Schatz face life in prison.

this is an honor killing. where's david wood?

On the other hand The Word of God says,

Thus you will recognize them by their fruits.
(Matthew 7:20)


Parents, don't be hard on your children. If you are, they might give up.
(Colossians 3:21CEV)

Discipline your son, for there is hope; do not set your heart on putting him to death.
(Proverbs 19:18)

you can be irrelevent elsewhere

This is one reason why adoption western style is wrong. If Christians truly want to help children, they can just sponsor them while staying home.

FMM you forgot the passage that says kill your blasphemer child, which is also in the OT along with proverbs ( which is written by Solomon the idol worshiper)

You bring up David Wood, and then tell someone they are being "irrelevent" (sic)? Hello pot, meet kettle.

See the comments section on this post on this blog where Fifth Monarchy Man has, by the grace of God, given the beginning of a well reasoned explanation of the distinction between the Old Covenant and the New Covenant. That is a beginning to inform you of the error of your comment.

david wood is known for posting articles like these and blocking people who refute him, thats why i said where he is. understand?

I have a question for yu and your brothers in the greater jidhad. What is the punishment for the sin of apostacy in Islam?

Fifith Monarchy Man quoted from Proverbs , last I checked proverb is in the Old Covenant. If the Old Covenant is no longer effective, be consistent and stop quoting some loving passages and ignore the horrible ones.

1mm: "Fifith Monarchy Man quoted from Proverbs , last I checked proverb is in the Old Covenant. If the Old Covenant is no longer effective, be consistent and stop quoting some loving passages and ignore the horrible ones."

You obviously either did not bother to follow the link I posted or were unable to comprehend FMM's comments. He already offered a reasoned explanation for why Christian quote from the Old Covenant whilst being under the authority of the New Covenant. Honestly, I don't believe you are slow-minded enough to not understand the argument (which I have seen explained to you over and over again in other places), I believe you just refuse to accept the explanation. Whatever....your prerogative unto your own loss....

I think you are not familiar with FMM. I discussed with FMM for long time until I realized he is a fool. So I stopped reading his crap.
See my discussion with him here post , where he was exposed as either unrepentant deceiver, or mentally challenged.

I was reading the book of judges and it seems that pronouncing something wrong and getting killed for it is justified in the bible in chapter 12 verse 6 after the men of gilead had smote ephraim those that tried to escape were put to a speech test where they had to say shibboleth but the people of ephraim could only say sibboleth without the h and so they were killed all 42000!! btw God was with the people of gilead since they were under jephthah through whom Ggod delivered the ammonites and amorites

1mm, that's hilarious!! You can't respond in a meaningful way so you label someone a "deceiver" and a "fool" as if that someone makes what he says go away. What does that say about you if you can't even respond to a "lying fool"?

Fifth Monarchy Man, praise the Lord that He has chosen to work through you and enabled you to respond so effectively.

I am so sorry for this. That a couple killed "their" kids. If I got it right, the first post said, as moslems they should not condemn them (right?) It is great that you as moslems don´t condemn the christian faith, that you try to live a good life for yr.self before the eyes of God. I know: what happened there was not "in Jesus name" if I use those biblical words, Jesus did. It was not in his sense, in his name, in his grace, in his love. They killed- and this is against the 10 commendments. What will be - if they do not repent from all of their hearts - when the one day stay before the creator. ... In the bible it is written in Mt. 7, not everyone who calls me Lord will come to me, for I did not know them...
To know Him is like the english "see", to see with one´s heart and mind. They knew Jesus, somehow, but the did not let their hearts be cut like an branch at the vine as the bible teaches. So everyone has to be humble. Noone is allowed to reign over s.o. with a dark might. With cruel deeds. It is ridiculous that in europe you can read about bad things "muslims" did, and muslims read bad things about "christians".
That way there will be never ever an end....
Even though I believe in Jesus, in that sense John 1: God was the word and the word became flesh...and he lived among his own...Heaven was not empty while Jesus was on earth, for time excist only where material is, and our God and creator fills eternity. So He is God on earth for 33 years and is gone back to heaven. In the Quran it is written: let us(1) create...That is more than one by grammar. But you and me as a christian believe in only one God.
Again: even though I believe in Jesus that way, I don´t consider everyone christian who calls himself so. And I prefer talking to muslims who have a good attitude, love and grace than to be together with so called christians who run around nearly naked.
And besides: AS I believe in the bible, I cannot eat porc or be uncovered. I cannot eat blood or eat meat in which there is still blood. (Shot animals) Why? Not because of th Old T. but because of the New Tst., too. (Apg.15)and 1 Cor 11.2-16