Dr James White of Alpha and Omega Ministries, Jonathan McLatchie of the Apologetics Academy and PS Rudolph Boshoff of Ad Lucem all appeared to respond to portions of this video which features a Speakers Corner discussion between Mansur Ahmed, Paul Williams and Jonathan along with some material edited in by yours truly.

I am toying with the idea of responding to Dr White via audio but in reality James did not interact with any of the points in the video aside from trying to argue for the Trinity from the text itself more forcefully than Jonathan did in the discussion. After what appeared to be paranoia on his part about a Muslim/s recording or watching his Dividing Line podcast and Muslims "dividing" Christians (ironic considering somebody recommended by his friend accuses Dr White of dividing Christians - not to mention him proceeding to criticise two Christians - one of which was Dr Bruce Ware - after he had finished the Dividing Line segment talking about Ignatius and the Trinity) he got on to the discussion and in all reality did not add anything that Jonathan's article has not added. Dr White, although obviously interacting with this video, did not even interact with the material from Dr Foster and Dr Tuggy. 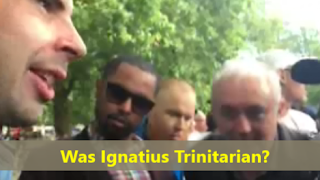 How can one have a meaningful dialogue when the other party fails to even attempt discussing the concerns raised? Not to mention Dr White's avoidance in naming which Muslims he was referencing - how can his audience even see what the opposition has said if he is so cryptic and guarded in his approach to avoid giving away the identity of those he is responding to?

I may address him in an audio video if I feel I have the time and encourage a more critical evaluation of the sources and a more rounded approach.

For our purposes Jonathan McLatchie's response captures the essence of what Dr White was saying so this here goes.

Now, I've already written on this subject in the past. Here's the basics you should know, basics which will take the fizz out of much  of Jonathan McLatchie's argumentation:

--
Did Ignatius of Antioch believe in the Trinity idea? Some Trinitarian apologists claim Ignatius taught the Trinity idea before the 4th century (in the first or second century). Is this a valid claim? No.

Firstly, the letters of Ignatius are suspected to be highly interpolated thus cannot be used as proof of Ignatius' beliefs as they are unreliable. See

..even the genuine epistles were greatly interpolated to lend weight to the personal views of its authors. For this reason they are incapable of bearing witness to the original form [Source]

There may be serious question whether these epistles of Ignatius have not been emended or edited by later writers. There are some words and phrases alien to early Christianity which raise suspicion that some of the works have been manipulated or added to by later church [Source]


Secondly, the quote Trinitarians use to contend Ignatius believed in the Trinity is thus:

"In Christ Jesus our Lord, by whom and with whom be glory and power to the Father with the Holy Spirit for ever,"

A "triune formula" -- often used to prove the Trinity -- is a phrase which includes three things or three persons. The answer to this question is yes. There is one surprising Trinitarian formulation which seems alien to early Christian. In To the Ephesians, section 7, there is a trinity of God, the Son, and Mary. Or, in section 18, the trinity of Jesus, Mary and the Holy Ghost. [Source]
---

OK now you're all up to speed,  we are back looking at what Jonathan wrote. What you'll notice is, the third point above does militate against him as he selectively grabs something which he thinks to be pointing at a triune formula (see highlighted parts of Jonathan's text below). Before, looking at it further, notice what's happening here. Jonathan is really just arguing via inference and speculation. He doesn't have anything definitive. Here's Jonathan piece:

Here is an excerpt from Ignatius' letter to the church of Ephesus:

“There is only one Physician --
Very flesh, yet Spirit too;
Uncreated, and yet born;
God-and-Man in One agreed,
Very-Life-in-Death indeed,
Fruit of God and Mary’s seed;
At once impassible and torn
By pain and suffering here below;
Jesus Christ, whom as our Lord we know.”
[…]
Deaf as stones you were: yes, stones for the Father’s Temple, stones trimmed ready for God to build with, hoisted up by the derick of Jesus Christ (the cross) with the Holy Spirit for a cable; your faith being the winch that draws you to God, up the ramp of love.”

In this text, we have allusion to the Father, as well as the Son (who is identified as God) and mention is made of the Holy Spirit. In the very same epistle, he later writes,

“As for me, my spirit is now all humble devotion to the Cross: the Cross which so greatly offends the unbelievers, but is salvation and eternal life to us. Where is your wise man now, or your subtle debater? Where are the fine words of our so-called intellectuals? Under the divine dispensation, Jesus Christ our God was conceived by Mary of the seed of David and of the Spirit of God; He was born, and He submitted to baptism, so that by His passion He might sanctify water.”

Again, this text refers to Jesus Christ as God and speaks of the Holy Spirit as being the "Spirit of God". Since Ignatius affirms monotheism, and affirms the deity of the Father, Son and Spirit while distinguishing them from each other as individuals, how can one assert that Ignatius does not affirm the Trinity?

As the parts of his citation he uses to allude to a triune formula is covering old ground let's add further insight on this whole discussion with special emphasis on what calling Jesus God could have meant and whether the Trinity is viable through the descriptions of Jesus in Ignatius' letter to the Ephesians 7:2 via Dr Edgar G Foster:

Schoedel writes that the distinctions made by Ignatius above cannot apply to the "internal relations of the Godhead" but it only applies to the incarnate Christ. However, I am puzzled over how one can apply Ignatius' words to the immanent Trinity or the economic Trinity. Subsequent believers [at Nicaea] declared that the Son is begotten, not created and that the Father is unbegotten. But how does one consider Christ "unbegotten" in relation to the cosmos (humanity) that he came to save? It is no wonder that Bart Ehrman writes in The Orthodox Corruption of Scripture that theologians would later find Ignatius' formulation in Eph 7:2 "vague." It does not seem to assist the Trinitarian case at all. It therefore has no theological force.
Interestingly Cyril C. Richardson plainly writes that Christ is called hO QEOS by Ignatius and he further points out that the bishop "does not explain, he only asserts that Christ is God" (Ignatius of Antioch, page 45). But Richardson goes beyond the surface structure orprima facie meaning of Ignatius' terminology and explores "what type of picture Ignatius has in mind when he employs the signifier QEOS. His conclusion?

"Unlike Theophilus of Antioch, he has nothing to say about God as creator; His eternity and invisibility are mentioned only in Pol. 3.2, and He is never predicated with immortality, the chief attribute of the heathen 'Gods.' For Ignatius QEOS means essentially a superhuman, moral being" (45).
He adds: "There is never a hint in his writing that Christ was in any way absorbed in God or confused with Him. He always stands in a place secondary and inferior to him" (44).

So what are we seeing here?

The citations provided by Jonathan McLatchie and Dr James White are not being dealt with with a critical lens and a desire to understand what the author may have meant. Instead an anachronistic view is foisted upon poor Ignatius of Antioch by later Trinitarians to try and claim him as his own. As seen, the citations:

Show an incompatibility with an understanding of Jesus that fits the 3-self Trinitarian paradigm. So what did we see from this discussion on the texts cited:

Jesus is considered secondary - subordinate - to God. Jesus, when called God, is meant to be superhuman rather than God himself. As Bart Ehrman points out in Foster's reflections later theologians found Ignatius to be vague too

Jonathan asks, how can one assert Ignatius didn't affirm the Trinity. Later theologians did not share Jonathan's confidence.

I'd also like to add, in my reading of Ignatius' epistle to the Ephesians I came across a portion which indicates agency. Agency in a Jewish understanding. So, was Ignatius offering elevated reverence to Jesus due to him being an agent of God? It's one worthy for consideration (see Ignatius's letter to Ephesus chapter 6 to see what I am referencing)

The conclusion is the same as my previous one; to say Ignatius taught the Trinity would be misleading.

Note: I have noticed gentlemen on social media who are straw-manning the Muslim arguments. We aren't saying because Ignatius didn't use the word "Trinity" that means he didn't believe in it. No, our contentions are he did not believe in the 3-self Trinity idea and this is apparent in his lack of Trinitarian thought coming out of his text.

Let me make a simple but extremely effective point. When Christians fraudulently added 1 John 5:7 into the text of the Bible in the 1500s the teaching was simple after outlining the 3 "Persons" of the 3-self Trinity belief it states they are one.

I think it's obvious why. The Trinity belief is a later development.

It is my hope James, Jonathan and Rudolph will reflect on the points outlined. The same applies to other Christians.

May God guide us all. Ameen