Let's forget about ERS and EFS for now. Time for a few comments on Professor Wayne Grudem's "Partial Revelation (of the Trinity belief) in the Old Testament" claim. Grudem's Comment are denoted by WD. 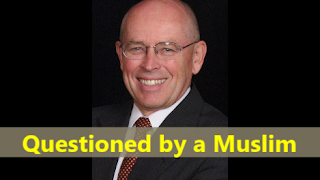 WD: The word trinity is never found in the Bible, though the idea represented by the word is taught in many places.

I'd be interested in seeing these "many places" where the Trinity idea is taught. Remember the 3-self Trinity idea is a 3in1 idea, that's to say an idea of God being tri-personal and all the "Persons" being consubstantial and co-equal.

Which places does Wayne Grudem have in mind? There are no places in the Bible which teach this Trinity concept. None. Zip. Zilch. Sure folk may scratch around and amalgamate a number of Biblical references and read a Trinity theory into those selected texts (i.e eisegesis) but that's not what Grudem appears to be claiming here. He's claiming places in the Bible teach this belief!

Perhaps his chief place is the Great Commission in Matthew 28. However, that does not teach the idea of the Trinity as outlined above.

Read it for yourself and see if it conforms with Wayne Grudem's definition of the Trinity belief:

WD: The word trinity means “tri-unity” or “three-in-oneness.” It is used to summarize the teaching of Scripture that God is three persons yet one God.

WD: Sometimes people think the doctrine of the Trinity is found only in the New Testament, not in the Old. If God has eternally existed as three persons, it would be surprising to find no indications of that in the Old Testament.

Grudem has external motivations to argue for the Trinity in the Old Testament - for him it would not make sense for there not to be some allusion to it at the very least for purposes of consistency. One of the problems arising for his position is that of confusion; if he believes a hint was given as to the 3-self Trinity belief wouldn't that not also mean he believes God confused people as there was no explicit teaching of the Trinity. Think about it, if hints of plurality within God were provided then that would have left people scratching their heads. Scratching their heads about fundamental ontology of God.

And why would a hint be given, why not just the full explicit teaching from the beginning - after all it is about the fundamental ontology of God? Surely a clear view of God would be expected to be given straight away rather than "hints" which would leave people confused for around 1500 years. Moses p is thought to have lived ~1500 years prior to Jesus p. Further problems arise for the Trinitarian position, Jesus did not teach the Trinity either, it was postulated by later Church Fathers from the fourth century onwards so Grudem would have folk believe God gave hints of the Trinity in the OT and thus left people confused for around 2000 years about a fundamental view of Himself.

The Bible itself would argue against confusion of that kind by stating God is not the author of confusion (1 Cor 14:33)

WD: Although the doctrine of the Trinity is not explicitly found in the Old Testament, several passages suggest or even imply that God exists as more than one person.

It's not explicitly taught in the NT either but let's have a look at one of the texts he appeals to as an implication of the Trinity belief.

WD: For instance, according to Genesis 1:26, God said, “Let us make man in our image, after our likeness.” What do the plural verb (“let us”) and the plural pronoun (“our”) mean?

Plurality doesn't necessarily denote three so to argue for plurality does not mean an argument for the Trinity belief. Plurality can be any number greater than 1. As we know the plurality of 3 did not become agreed upon by the Church until at least 381 CE. For those wondering why not 325 CE? “The Nicene Council only concluded that the Father and Son are ontologically one: it did not include the Holy Spirit in the co-substantial relationship supposedly obtaining between the Father and Son” [Edgar G Foster]

WD: Some have suggested they are plurals of majesty, a form of speech a king would use in saying, for example, “We are pleased to grant your request.” However, in Old Testament Hebrew there are no other examples of a monarch using plural verbs or plural pronouns of himself in such a “plural of majesty,” so this suggestion has no evidence to support it.

Now, this is not a major point of contention but from Jason Dulle, it appears there may be some candidates for the use of the royal plural elsewhere in the Hebrew scriptures. Dulle gives possible examples from Ezra and Daniel:

The second theory is that the plural pronouns are used as a “majestic plural.” This type of language was typically used by royalty, but not exclusively. Biblical examples include Daniel’s statement to Nebuchadnezzar, “We will tell the interpretation thereof before the king” (Daniel 2:36). Daniel, however, was the only one who gave the king the interpretation of his dream. King Artaxerxes wrote in a letter, “The letter which ye sent unto us hath been plainly read before me” (Ezra 4:18). The letter was sent to Artaxerxes alone (Ezra 4:11), yet he said it was sent to “us,” and was read before “me.” Clearly the letter was only sent to, and read to Artaxerxes. When Artaxerxes penned another letter to Ezra he used the first person singular pronoun “I” in one place and the first person plural pronoun “we” in another (Ezra 7:13, 24).

WD: Another suggestion is that God is here speaking to angels. But angels did not participate in the creation of man, nor was man created in the image and likeness of angels, so this suggestion is not convincing.

Secondly, Dr Michael Heiser and others don't see a problem with viewing Gen 1:26 as an exhortational declaration:

God announced to his council his idea to create mankind (“hey, guys, let’s do this!” – a sort of exhortational declaration), then HE (and he alone, by virtue of the GRAMMAR) created humankind in HIS own image (not theirs).

Yet, the NIV Study Bible also confirms in its commentary on Genesis 1:26:

Us… Our… Our. God speaks as the Creator-king, announcing His crowning work to the members of His heavenly court [See Rabbi Tovia Singer on the Trinity]

Edgar G Foster discusses this in his summary of Alan J. Hauser’s views on Gen 1:26, which militates against the Prof. Wayne Grudem's conjecture and throw into question his abilities in Hebrew:

Hauser expands on this argument. He does not think that the use of the Elohim in Genesis 1:26 proves that Genesis teaches God’s triunity. One reason that Hauser concludes this has to do with the Hebrew word Elohim. Granted, Elohim is morphologically plural as are “us” and “our.” But these words, while they might seem to indicate plurality, definitely do not suggest triunity. It must also be kept in mind that in Hebrew it is common for the plural noun to cause the verb to be plural (Cf. Genesis 20:13, 35:7). E.A Speiser therefore renders Genesis 1:26 as follows: “The God said, ‘I will make man in my image, after my likeness.'”

WD: The best explanation is that already in the first chapter of Genesis we have an indication of a plurality of persons in God himself. We are not told how many persons, and we have nothing approaching a complete doctrine of the Trinity, but it is implied that more than one person is involved.

And what of the thousands of singular pronouns used in the Bible such as in Isaiah 44:24, Gen 1:5 and Gen 9:6 ? In fact the very next verse Genesis 1:27 uses a singular pronoun as to whom mankind were made in the image of

27 So God created human beings in his image. In the image of God he created them. He created them male and female.

Does Prof. Wayne Grudem have an answer for this? If he is consistent he'd see the singular pronouns being a problem for his Trinity hypothesis. In fact if this one reference, used as a far-fetched reference to plurality, is being pushed by Grudem as a hint to the Trinity belief then it really is case closed if he uses an objective mindset on all the singular pronouns used of God in the Bible - he has to believe those to be pointers to God's singularity in Personhood and Being if consistent.


There is no statement in Scripture that says, “God is three Persons in one being"