Right, let’s swiftly put this this polemic to bed and highlight gross inconsistency and what appears to beintellectual dishonesty. Polemicists like Jay Smith and Pastor Tony Costa claim Surah Al Fatiha (the chapter in the Quran) is a prayer cursing Jews and Christians. They claim the last Verse of the Quran is a curse on the Jews and the Christian.

This is not true at all - read it for yourself. 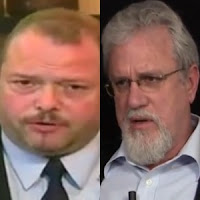 Anybody with scintilla of comprehension and fairness can see that it is not a curse. A curse is when one prays for bad to fall upon a person: Muslims are not asking for God to be angry with Jews and Christians here!

My response to Tony is that you need to actually read the text for yourself and comprehend it rather than going off what some Christian polemicist is saying on the internet. No need to feel disconcerted about Muslim prayers, Tony.

However, Tony Costa in his written work, has said Paul of Tarsus (in Galatians 1) curses anybody who does not teach the same Gospel as him:

There are such things as divine curses in the Bible where God for instance pronounces judgment on those who pervert and preach a different Gospel (see Galatians 1:6-9), or brings a curse on those who do not love the Lord Jesus (see 1 Corinthians16:22). [Pastor Tony Costa]

Here's Paul of Tarsus in his own words:

Tony Costa and his Trinitarian missionary colleagues will believe Paul’s words are a curse against Muslims, Jews, Unitarian Christians, Jehovah Witnesses and Mormons as the aforementioned do not accept the Trinitarian view of Jesus.

Tony Costa, if consistent, would find Paul’s words in Galatians to be “disconcerting” and a “systemic cursing of Jews” which “vilify” Muslims, Jews, Athests, Hindus, Sikhs, etc.

Perhaps Tony forgets what he writes in his academic work when he is in the company of polemicists against Islam? From this example, it seems, he totally forgets academic standards, intellectual integrity, fairness and comprehension skills when he puts his anti-Islam hat on.