Recently, there was a bit of online fuss over a 1 John 2:22 manuscript. The argument made was casting doubt on whether the highlighted portion (bold)  of 1 John 2:22 was part of the original text.

Who is the liar? It is whoever denies that Jesus is the Christ. Such a person is the antichrist—denying the Father and the Son. [1 John 2:22]

It is true for this particular manuscript the saying "Such a person is the antichrist—denying the Father and the Son" is "missing". It ends at: ουκ εστιν ισ

The manuscript exists although, I understand, Mustafa Ahmed's article initially got the nomenclature mixed up hence the difficulty and confusion in finding the relevant manuscript. No need for anybody to call Mustafa a liar here. It exists, his article wasn't making all this up. Those who did resort to such finger pointing need to apologise for false witness.

OK, but is it an argument with efficacy? I am not convinced. There's a lot of confusion around this manuscript.

1. The first bout of confusion arises, from the reader's view point, due to the automatic assumption that it is written on papyrus, paper or parchment (as most NT manuscripts are). It's actually written on clay. It's a piece of pottery (material ostracron): 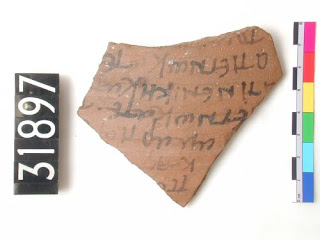 Having seen it one automatically knows that it's no big deal that it does not carry the sentence "Such a person is the antichrist—denying the Father and the Son". It's a small fragment of pottery, there's no reason why it should contain the whole verse. This can only be concluded once the fragment is seen rather than relying on a database of the text on each manuscript. It's a good learning experience for everybody.

"between ~300 CE and 600 CE, this folio (page) falls into the earlier period of ~300 CE. This is the earliest manuscript of 1 John we have" Mustafa Apologist

The earliest date is used from a given range but it's dated to be mid to late 5th century here  and University College London range it from 395CE and beyond.

It's later than Codex Sinaiticus.

I don't believe the argument in Mustafa Ahmed's article is a convincing argument due to it being built on premises that have not been fully or clearly established. It's an adventurous effort to inject a new argument into the bloodstream of polemics but right now caution is the watchword. Perhaps that argument can be revised in some way albeit I personally don't see a legitimate route for this argument to be carried further.

Hey, why was a new route even necessary? Are these words from Jesus? Isn't 1 John anonymous? Does 1 John carry any authority?

The author doesn't appear to be a Trinitarian!

If there was an oral tradition floating around, which the author of 1 John based this statement of whoever denies the Son has denied the Father on we don’t know the context of the statement. Christians readily admit they don't know the context of purported quotes of Jesus: "..the well-known fact that we often do not have the original context in which Jesus’ sayings were spoken, much less their precise wording" [William Lane Craig]

In addition, if there’s some Prophetic grounding to the statement, it's not an un-Islamic statement as it would appear to be a teaching of whoever denies the Prophet of God has denied God. Isn't that what people who reject the messengers of God essentially wind up doing?


Did Peter Believe in the Trinity?