The spin around the speculation that Shk Ahmed Deedat read a bit from Josh McDowell’s book before he passed away is outlandish. It’s disappointing to see somebody like Dr Mike Licona spreading such intellectually dishonest suggestions. 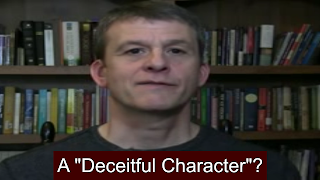 Mike Licona stated “Deedat was apparently having second thoughts about Islam and was taking another look at Jesus”. He bases this wild-eyed suggestion on speculation that Shk. Deedat read a portion from Josh McDowell’s book the day before he passed away.

This claim was out to Shk. Ahmed Deedat’s son who responded by dismissing it as deception and a ploy to promote Josh McDowell’s book. Shk. Deedat’s son also indicated Shk. Deedat would never leave Islam.

It’s well known Shk. Deedat was debating Christians and propagating Islam on his sick bed thus it would come as no surprise that he would read Christian missionary literature as it would be part of his research and debate preparation. Mike Licona and other Christian apologists read material from the likes of Bart Ehrman and Richard Dawkins as part of their apologetics research and debate preparation, it would be dishonest to suggest they were having second thoughts about their faith based on them simply reading such material. Mike Licona should be able to see how wild and deceitful this claim is!

Sadly, Licona doesn’t appear to be the only one who is passing on deceitful rumours about Shk. Deedat. Dr Nabeel Qureshi, in his book, does inform us of "other" people spreading the absurd rumour that Shk. Ahmed Deedat repudiated Islam whilst on his sick bed.
Let’s be clear here, these “other” people who claim Shk Deedat repudiated Islam on his deathbed are internet trolls. There’s no evidence for this whatsoever.

In fact just by reading his biography or news reports concerning Shk. Deedat’s passing away people can see this claim is a load of nonsense as he was serving Islam even whilst bed-ridden up to his passing away:

August 8 marks 10 years since Deedat’s death of kidney failure at the age of 87. He was bedridden for the final 10 years of his life, after suffering a stroke that left him paralysed and unable to speak.

Though doctors initially gave him little chance to live, Deedat continued to engage in religious work until his death – communicating by using a grid of the alphabet, which he used to spell out words letter-by-letter by signalling with his eyes. [Al Jazeera]

It could well be that this rumour which "other" people were spreading evolved from wishful claims by Josh McDowell:

Josh McDowell said: Amazingly, a close relative of his came to me a few years ago when I was visiting South Africa and said, “I felt you needed to know some details around the death of Ahmad. The day before he died, he asked me to find a copy of your book More Than A Carpenter. So, I brought it to him and he read some of it.” We won’t know until after this life, but there’s a chance Ahmad Deedat is in heaven.

Josh McDowell in this public statement doesn’t go as far as Mike Licona. Mike Licona appears to spin Josh McDowell’s wishful speculation into a suggestion Shk. Deedat was having doubts about Islam. Mike’s comments are certainly deceitful - whether he got them from somebody else or whether he instigated such spin is for him to disclose. Josh McDowell is irresponsible with his comments – they too are misleading. Josh McDowell would surely know that apologists do read material from the other side in order to produce responses to their claims.

What we have here is at least two big name Christian apologists who should be ashamed of themselves. Mike Licona will, if consistent, call himself a “deceitful character and he will also say the same about Josh McDowell seen as he called a Muslim such for simply adopting the logical conclusion, based on Mike’s podcast comments, of Mike believing there’s a false prophecy in the New Testament from Paul of Tarsus.

Mike Licona, at the very least, should apologise publicly.

Prophecies about the Messiah

Is the Gospel of John reliable?

What does the Aramaic word name for Jesus tell us?