The Archbishop of York, Dr John Sentamu, has been attacked for comments in relation to an amendment proposed by Andrea Williams. This has been blown out of proportion, the metaphorical pitchfolks and torches are out in force circling Dr Sentamu. 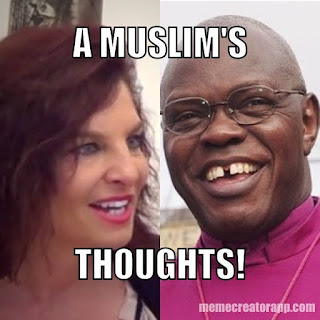 As a Muslim, who visits a CoE church for observation purposes from time to time, I'd like to add some balance to proceedings and insight from outside the church to help folks look beyond the goldfish bowl that is the CoE.

Firstly, the Archbishop of York is spot on, common good is common to all people. This is not a novel idea amongst Christians either, CS Lewis expresses the same view in Mere Christianity. Let me set a few pulses racing, I do wonder if there would have been such a hullabaloo if the bishop making the same remarks was a white bloke with an English accent in the stead of a black bloke with an African accent (I'm not saying anybody is racist here, all I'm saying here is that a black CoE bishop may be a little more noticeable when it comes to these comments hence the level of public reaction). Who knows?! However, one thing is for sure, he did not reject the Bible. Folks please stop with the sensationalism of him rejecting the Bible.

I will interact with various comments online from those criticising Dr John Sentamu's comments.

The Church of England, as an institution, is thoroughly apostate...As Archbishop of Canterbury, Justin Welby is a train wreck. Worse, however, is his colleague from York. John Sentamu is a prairie fire consuming every last vestige of orthodoxy in the Mother Church. His behavior at Synod, as witnessed below, was particularly odious [James Gibson]

Hmmm to say the CoE is an apostate institute is a hefty claim for a Christian to make. Assuming James is a Christian, who else is an apostate in James' eyes? Where does this conveyor belt stop? How about the "Christians" involved in 381 to usher in a Trinitarian understanding involving the Holy Spirit, are they "thoroughly apostate"? What about all the church men who decided what books to call inspired and include in the canon, are they "thoroughly apostate" too:

..it is not quite accurate to say that there has never been any doubt in the Church of any of our New Testament books. A few of the shorter Epistles (e.g. 2 Peter, 2 and 3 John, James, Jude) and the Revelation were much longer in being accepted in some parts than in others; while elsewhere books which we do not now include in the New Testament were received as canonical. Thus the Codex Sinaiticus included the 'Epistle of Barnabas' and the Shepherd of Hermas, a Roman work of about AD 110 or earlier, while the Codex Alexandrinus included the writings known as the First and Second Epistles of Clement; and the inclusion of these works alongside the biblical writings probably indicates that they were accorded some degree of canonical status. [FF Bruce]

And then what about those Christians after Von Tischendorf's 19th century discovery of Codex Sinaiticus who subsequently declared the ending of Mark and the Pericopae Adulterae (in John's Gospel) to be, effectively, unauthorised additions to the text, are they "thoroughly apostate" or those who came before faithfully believing those two chunks from the Bible were inspired by the Holy Spirit? How about those who are lax on standing out against divorce and sex before marriage in the Church, surely that's pretty much all of the Church in the West, are they all "thoroughly apostate"?

James Gibson may want to rethink his use of the word "apostate".

On Friday 7 July, The Archbishop of York John Sentamu rejected the authority of the Bible in response to an amendment proposed by Andrea Williams, to insert the words "as revealed in the Bible and taught by the church" to a motion calling for politicians to "prioritise the common good of all people."...John Sentamu responded: "If you’re going to serve the whole community please don’t limit our language…The Word became flesh and sadly we are now making it Word, Word and Word again. Resist the amendments." [Christian Concern on FB]

Again, this is utterly hyperbolic to claim John Sentamu has rejected the authority of the Bible, thus it's misleading. He never did such a thing. Sure, his wording could have been less emotive and he could have expressed himself with a little more clarity to stymie the potential wildfire of hyperbolic criticism.

As John Sentamu responded, the Archbishop of Canterbury Justin Welby was seen to be clapping and nodding in agreement. The amendment was rejected. [Christian Concern on FB]

Clearly the head honcho did not see it as a rejection of the Bible hence the gestures of approval.

The PCC considers the response by the Archbishop of York to Mrs Andrea Williams’ amendment of Item 48 at the July General Synod of the Church of England, 2017, in terms of what was said, to indicate theological ineptitude at best and error at worst; and how it was said, as intemperate and ungodly.  [Timothy Benstead St. John Newland PCC]

Actually Timothy has a point in the way it was said. I don't believe Dr John Sentamu is inept when it comes to Christian theology. A lack of deliberation over his wording would be an understandable critique on the part of those Christians upset with Dr Sentamu.

As such there was a failure to meet the standard required of a bishop according to Titus 1:7-9. Neither did the Archbishop display his canonical duty to ‘with all faithful diligence…. banish and drive away all erroneous and strange doctrine contrary to God’s Word; and both privately and openly to call upon and encourage others to the same’ in relation to Item 58...The PCC looks forward to receiving an indication of repentance from the Archbishop and will offer prayers to that end.  [Timothy Benstead St. John Newland PCC]

It seems like this is quite selective. A selective rod to beat the Archbishop of York. Would Timothy Benstead be willing to extend the same critique to his church and church members with regards to divorce, sex before marriage as well as his "Christian" predecessors outlined above with respect to James Gibson's comments. Timothy Benstead would be calling many Christians in the West to repentance if he was consistent with this standard, he wouldn't have time for anything else as he'd be constantly writing letters asking for indications of repentance for various "Church misdemeanours".

The PCC has also been grieved by the general direction of the Synod and the appalling manner in which those who hold to the teachings of Jesus have been ridiculed, mocked and scorned. We fear that the Synod has imbibed the ‘spirit of the age’ and we request satisfactory assurances from the leadership that this kind of behaviour is not acceptable and that it will work towards creating a more courteous and biblically responsive environment in the future. [Timothy Benstead St. John Newland PCC]

The spirit of the age has been imbibed by the Church and by all Christians in the UK. The lack of protest over various ills in our society which we are desensitized to says as much; women's dress, dating, the state of British TV, porn addictions amongst Christians, gay marriage, apathy towards protesting against wars in the Middle East and aganst austerity and financial inequality etc. etc.. In addition, I'd like to ask when was the last time a concerned Christian ever sent letters asking for Christians to repent after being imbibed by the current climate of Islamophobia - certainly Christian missionaries in the UK are imbibed by such spirits of the age.

I hope this post helps to add balance and encourages further reflection on a broader scale amongst the members of the CoE.

Muslim Interviews Sid Cordle of the Christian Peoples Alliance
Does Jesus use Violence and Force According to Trinitarian Christianity?

Did Peter Believe in the Trinity?
Textual Criticism of 2 Corinthians By Bart Ehrman
Tovia Singer: Does the New Testament Teach Jesus is God?

Why Islam
Notes from Sean Finnegan's interview with Patrick Navas: Is the Trinity Biblical