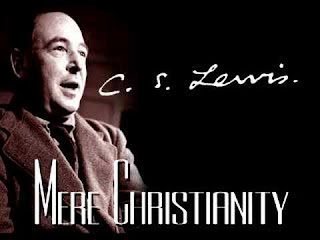 This work was originally a broadcast aired during WW2.

Overall I was surprised to see it was not a typical Christian apologetics and polemics discourse. Having heard modern Christian apologists talk this work up, I was expecting an apologetics tome. It had more of a spiritual theme and actually reminded me a little of a Muslim book Purification of the Heart, Translation and Commentary of Imam al-Mawlud’s Matharat al Qulub by Hamza Yusuf.

Lewis has a great turn of phrase, a very elegant writer. I guess that is part of the appeal of his work. Style. Is it style over substance though?

I skipped much of the latter part on Christian life and ethics. For some sort of foundational book of apologetics I was surprised at the lack of apologetics (apologetics one would expect from Christians in 2017). Much of it was speaking to Christians and/or those from a Christian background with a spiritual emphasis. The already convinced or those half-heartedly into the religion (nominal Christians?) are the target audience in my view. This makes sense considering this book was a series of radio broadcasts in a Britain which was suffering aerial bombardment by the Germans - the majority of people would have been Christian.

CS Lewis believed it was OK to skip parts in books.

CS Lewis believed, rightly, there was a moral law which is a law of human nature common to all men and nations. Perhaps something similar, in part or loosely at least, to the Muslim view of natural disposition: fitrah.

He believed all folks, even those who would have disagreed with his concept of right or wrong principles always invoke them when they feel wronged.

He does go through objections or naturalist explanations of the moral law: herd instinct and social convention.

I thought it was ironic he drew a distinction between Christian and Nazi morality. Ironic because the Nazis were Christians too. His example to help his argument for the existence of a moral standard or real morality to judge which morals are better was linked to what was happening at the time WW2, how does one judge which is superior, Nazi morality of Christianity, if there is no moral standard?

What lies behind the law?

Religious view: A conscious being is behind the universe. Universe is made for a purpose.

SC Lewis teaches: Christianity tells people to repent and promises them forgiveness thus it’s talking to people who know there is a Moral Law and a Power behind it.

1. God is beyond good and evil. I.e. Pantheism. This idea was held by the Prussian philosopher Hegel

2. God is “good” righteous” i.e. Christianity, Judaism and Islam. God is good and is separate from the world – some things in the world are contrary to His will.

“Christianity and water”, this term coined by CS Lewis represents what I call “Westernised Christianity”. There’s a sugar coating and a complete emphasis on parts of Christianity which are about love and what fits in with Western norms. This is destroying Christianity consciously or unconsciously (whatever the case may be). It ignores “the difficult and terrible doctrines about sin and hell and the devil and redemption”

This idea that Jesus turns up and claims to be God is an idea that deep scholarship of the NT does not take on board I wonder whether Lewis would have said such if he had access to the type of historical Jesus scholarship and the widespread Unitarian arguments which so many are influenced by today to form different conclusions about Jesus and the church doctrine of the Trinity and Jesus deification:

51: Among the Jews there suddenly turns up a man who goes about talking as if He was God. He claims to forgive sins. He says He has always existed.

51: I am trying here to prevent anyone saying the really foolish thing that people often say about Him: ‘I’m ready to accept Jesus as a great moral teacher, but I don’t accept His claim to be God’. This is the one thing we must not say. A man who was merely a man and said the sort of things Jesus said would not be a great moral teacher. He would either be a lunatic – on a level with the man who says he is a poached egg – or else he would be the Devil of Hell. You must make your choice. Either this man was, and is, the Son of God: or else a madman or something worse.

What does “in Christ” mean?

This is an interesting definition which is problematic for Christian communities espousing Islamophobic (anti-Muslim), pro-homosexual and pro-divorce views amongst other Westernised views which are contrary to the Bible.

“...they mean Christ is actually operating through them; that the whole mass of Christians are the physical organism through which Christ acts – that we are His fingers and muscles, the cells of His body”

3 parts of morality according to CS Lewis

“Morality in the minds of men is seen as something which interferes and stops someone from having fun.”

Moral rules are there to prevent a breakdown, or a strain, or a friction in the running of that machine.

3 things morality is concerned with:

1. Fair play plus harmony between individuals

2. Harmonising/tidying up things within individuals

3. With the general purpose of human life (what man was made for)

Cardinal virtues [Word cardinal comes from the latin meaning hinge of a door...pivotal]:

Be as hamless as doves and as wise as serpents

Moral teachers: remind us of old simple principles [In a way this would apply to Moses, Muhammad, Buddha and Jesus]

Golden rule of the NT (do as you would be done by) is a summing up of what everyone, at bottom, had always known to be right. [me: Christianity does not have a detailed system in applying this principle. This highlights the need for Islam]

CS Lewis on what a Christian society would be like

All the same, the New Testament, without going into details, gives us a pretty clear hint of what a fully Christian society would be like.


To that extent a Christian society would be what we now call Leftist. On the other hand, it is always insisting on obedience – obedience (and outward marks of respect) from all of us to properly appointed magistrates, from children to parents, and (I am afraid this is going to be very unpopular) from wives to husbands.

If there was such a society in existence and you or I visited it, I think we should come away with a curious impression. We should feel that its economic life was very socialistic...

A girl in the Pacific islands wearing hardly any clothes and a Victorian lady completely covered in clothes might both be equally ‘modest’, proper, or decent, according to the standards of their own societies: and both, for all we could tell by their dress, might be equally chaste (or equally unchaste).

The monstrosity of sexual intercourse outside of marriage is that those who indulge in it are trying to isolate one kind of union (the sexual) from all other kinds of union which were intended to go along with it and make up the total union.

CS Lewis’ time: some churches did not allow divorce while others allowed it reluctantly in very special cases.

The idea of the knight - the Christian in arms for the defence of a good cause – is one of the great Christian ideas. War is a dreadful thing, and I can respect an honest pacifist, thought I think he is entirely mistaken. 119

Being the big noise at the party

Pride or self conceit

Opposite of which is the centre of Christian morality – humility.

Theology means the science of God

153: I think any man who wants to think about God at all would like to have the clearest and most accurate ideas about Him which are available

This is something a Muslim can appeal to when talking to Christians about the Trinity doctrine - a doctrine that Jesus clearly never believed in.

179: The Eternal Being, who knows everything and who created the whole universe, became not only a man but (before that) a baby, and before that a foetus inside a woman’s body. [This is a quote which can be used by Muslims to show the fact this god-man doctrine does not make sense, why would God become a baby and even a foetus? I know the Christian may say he came to die for sins but why not just become a man and then die for the sins rather than be a foetus, baby, infant, teen and then a man according to the Christian ideology?]

“Just as when Christianity tells me that I must not deny my religion even to save myself from death by torture, I wonder very much what I do when it came to the point” 115

"Everybody must work so they have something to give to the needy!"

“...God will make us good because he loves us”

You will find this again and again about anything that is really Christian: every one is attracted by bits of it and wants to pick out those bits and leave the rest.

“Free will although makes evil possible also the only thing that makes possible any love or goodness or joy worth having”. It gives "good" extra meaning.

Who the dickens am I

Jibbed: unwilling to accept or do something

Prig: self-righteous moralistic person acting as superior to others