Dear Hatun Tash, this issue has been explained previously when Daniel and/or Lizzie were asking about Muslims not shaking the hands of the opposite gender. Please do read up and watch the video on that post and you’ll learn this is also a teaching in Orthodox Judiasm called Shomer Negiah. 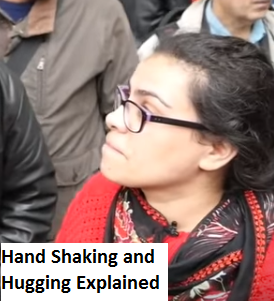 For the video see here


I must say I’m disappointed in your colleagues as I’d imagine they would have seen my post on this topic, they should ahave shared it with you so you would not fall into the same error. Perhaps they did not see it. Who knows, you can ask them. And you can share this post with them too.

1. You can’t equate somebody not hugging you or touching you for religious reasons as them not loving you. Likewise, you can’t associate the act of you willing to hug them or shake their hands as you loving them more than they love you.

2. If you follow through your thought patter you’d say orthodox Jews don’t love Christians, Muslims and anybody else who is not in their circle of family. Would you be willing to say that in public, I hope not. I would advise you not to as it would be deemed anti-Semitic.

3. The act of hugging or shaking hands in other societies (non Jewish and non Muslim) is probably linked to social propriety and custom. These customs and norms change with time. For instance, I think, without expending time to look it up, a lady in Victorian England would not hug a non family member as it would be considered inappropriate. Likewise for other preceding time periods in the UK which

4. CS Lewis talks about the rule of propriety with regards to women's dress sense. I *think* this would apply equally to a woman’s behaviour (as well as a man’s) with respect to members of the opposite sex. I think he *could* have argued for Christian women to wear hijab in Muslim societies where being hijab-less would be seen as immodest (e.g. Saudi Arabia). This is what he writes: The social rule of propriety lays down how much of the human body should be displayed...thus while the rule of chastity is the same for all Christians the rule of propriety changes.
A girl in the Pacific islands wearing hardly any clothes and a Victorian lady completely covered in clothes might both be equally ‘modest’, proper, or decent, according to the standards of their own societies: and both, for all we could tell by their dress, might be equally chaste (or equally unchaste).

5. Having a more liberal outlook on life where one’s life is governed by less restrictions doe snot mean one’s world view is better. If that was the case then secularism of the hyper-individualist kind would be the truth. In fact, Theists who believe in a personal God Who has Spoken through Revelation would argue it is logical for God to lay down restrictions and prohibitions on behaviour.

Jay Smith Are You Proud of Your Pfander Ministries Students?

Is Genesis 22 a Messianic Prophecy?

Advice For Muslims On Dealing With Christian Anti-Muslim Sentiment...
Posted by Yahya Snow at 14:26