Jay Smith Are You Proud of Your Pfander Ministries Students?

In this video we see Hatun Tash, formerly of Pfander Ministries, and now of DCCI Ministries, along with her friend Daniel Zelalem, mock the Quran and call a KKK handbook the Quran. They (Daniel in this case) also liken an ex-Christian, who converted to Islam, to a “dog” and liken his faith to “vomit” whilst calling him a fool. Hatun Tash invades a Muslim man’s personal boundaries and hugs him despite him not giving her permission and not wanting contact with a female who is not a family member - all in an effort to cause drama. 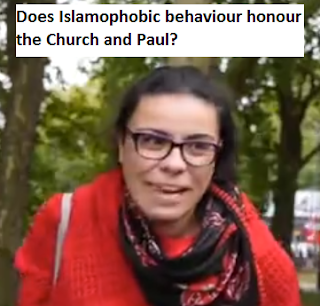 Orthodox Jewish and many Muslim men and women do not touch a person of the opposite gender if they are not family members. The Jews call this Shomer Negiah. To listen to a great explanation of this practice by a Jewish lady and a couple of Muslim scholars please see here.


Hatun Tash’s unwanted touching would be seen as offensive and disturbing. You just don’t touch people without their permission. You can’t go around making people so uncomfortable, regardless of whether you think it’s harmless fun. Respect people’s boundaries.  I would encourage Hatun to apologise.
Insulting somebody’s holy book and deliberately identifying it with a KKK manual is offensive and childish. Clearly that stunt was designed for mockery; I would call for both Daniel and Hatun to sincere apology.

Play in full screen. This video is also uploaded  here


The man calling the young Muslim gentleman a "fool" and likening him to a dog and his faith to vomit is something Daniel (and Hatun, seen as she was laughing) should apologise. The wider problem here is that this type of abuse of Muslims is not isolated, it appears to be a common theme amongst many Christians (online mainly). As we learnt, Hatun’s teacher calls Muslims “sewage”.
Perhaps Hatun and Lizzie Schofield believe insulting non-Christians is biblical as Jesus was harsh in the NT at times. If I understand correctly, Mr Shamoun, takes the view his insults are not in contravention with Christian behaviour.
Sam Shamoun calls people “sewage”  He uses such de-humanising terms for people he feels threatened by regularly – he’s been doing it for years. Is this something you believe is endorsed by Christianity? IIRC Sam Shamoun justifies his hard-line stance by claiming Jesus was harsh with certain people in the NT. I suspect he believes Jesus agrees with his abuse and it is biblical behaviour. You can verify whether this is the case or not.
In our last email exchange which a Christian radio/TV show presenter as CC’d in he called me all of the following:
A “vile dog”, “slime” “Muhammadan dog” “swine”, “vile rabid dog”. Sam wants to “muzzle” my “rabid mouth”
I’ve forwarded these abusive emails to my friend, reverend Samuel Green.
In this case, although I do encourage a public apology, I won’t ask for it myself as it may be that Lizzie, Daniel and Hatun believe their comments were acceptable or somewhat acceptable according to their Church tradition.
Numbers 31 and Deuteronomy 21 - Sam Shamoun