Is This Hatun Tash’s Vile Slander Against “Dawah Team”? 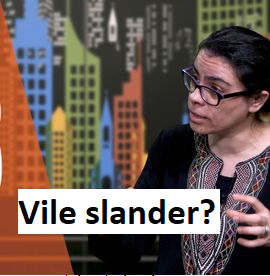 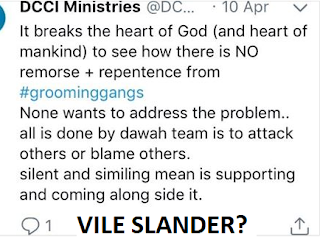 The tweet is in unclear English but it does appear as though the author of this tweet (Hatun Tash?) is suggesting the “dawah team” (I think this is a catchall term anti-Islam Christian “evangelists” are using for any Muslim who they encounter resistance from or whom is preaching Islam) supports grooming gangs – sexual abuse and rape of girls. A nasty and malicious suggestion showing the heart of the author of the tweet. If it is Hatun Tash, it would keep in with her past inflammatory behaviour towards Muslims, she suggested Muslims who helped the Grenfell Tower fire victims were only doing so because of the cameras and she thanked God for the death of a Muslim who used to preach to Christians.

If that’s what he/she is suggesting then that is clearly vile slander. Just because somebody is unwilling to discuss “grooming gangs” with you, specifically you, (an antagonistic anti-Islam Christian) it does not mean that they agree with or support grooming gangs. Quite how somebody can reach that conclusion is beyond me.

Muslims have repeatedly denounced grooming gangs. It’s obvious grooming gangs are not acting according to Islam as alcohol, drugs and rape are all unislamic. To suggest criminals involved in such abuse are acting Islamic is to throw aside common sense for one’s agenda of propaganda.

CJ Davis of St Nicholas Church in Tooting is asked to check whether this tweet comes from one of his church members. By their fruit ye shall know them. Anti-Muslim propaganda, vile slander and deceit are not what one would consider to be good fruit.

Given the recent story about the Australian archbishop Philip Wilson concerning sexual abuse cover up,the report about the former archbishop of the Church of England, George Carey, and the news report which states the CofE is facing more than 3,300 allegations one must wonder whether the person behind this tweet is getting in the face of Church of England clergy and members (perhaps folks like Robert Schofield, Joe Gawley and CJ Davis) and asking them to condemn sexual abuse and groomers in the Church of England? And if they refuse to interact with you because they feel offended or just feel like you’re trying to point score by taking advantage of church abuse scandals would you say they “support” sexual abuse in churches?

Or are the news stories of brown folks with Muslim names in sexual grooming scandals just being used as a stick for evangelical “Christian” propaganda? By their fruit ye shall know them. I think weaponising sexual abuse victims and their pain for evangelical and/or anti-Islam propaganda is a sign of bad fruit, specially in the post-Brexit vote climate we find ourselves in. Like somebody is going to sign on the dotted line and join the CofE or any other church because of such shallow tactics.

I await answers from CJ Davis.

Lizzie Schofield and the Polygamy Discussion

A response to Gavin Ashenden


Christian Inconsistency Around Arguments for Prophet Muhammad in the Bible