Sam Shamoun’s ignorance is only preceded by his belligerence. In his latest church-shaming episode, Sam Shamoun erroneously appeals to the lie of AllahuAkbar meaning “God is a mouse in Hebrew. This lie was unveiled by us here.

Sam Shamoun takes this lie one disgraceful step further by using the word “rat” instead of mouse – in an effort to insult. However, this man has no connection with sound thought as he has wound up insulting Arab Christians as Arab Christians would identify and agree with AllahuAkbar (God is the greatest).

Here is the awful screen shot of this belligerent at work (Shamounian is Sam Shamoun’s handle on YouTube – double click to enlarge the image). It has been isolated as the capture would include his other "remarks" which are of a similar nature but not the topic of discussion for today. 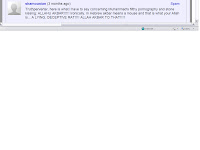 Sam Shamoun’s other rabble-rousing words are addressed
This dishonest man suggests there is pornography in Islam – this is another ignorant claim as pornography is NOT allowed in Islam – see here. The "stone kissing" comment is addressed here

He also accused God of being deceptive and lying – God is Al Haqq (the Truth), He does not lie nor does He deceive the truthful. Sam Shamoun clearly proves he has no “holy spirit” within him – he is so misguided that he wound up insulting God according to Christianity too as knowledgeable Arab Christians are grossly offended by Shamoun’s disconnection from holiness.
Sam is blind to the Irony

Sam Shamoun works for an ARAB CHRISTIAN station. Whilst espousing such blasphemous sentiment our Sam has the gall to ask for cash on behalf of his ARAB Christian TV station (ABNSAT) – quite what they make of Sam’s latest blasphemous bigotry is beyond us. I wonder what Bassim Gorial, the Iraqi Christian director of ABN, thinks of Sam Shamoun’s latest insults…

Recently, a Christian (James White) claimed he “learns” from Sam Shamoun and Muslims hate Sam Shamoun due to his argumentation against Islam. If James wants to learn from a dishonest rabble-rouser then that is his choice BUT he should learn Muslims do not hate Shamoun for his shoddy arguments against Islam; we hate him for his lies, insults and blasphemies – the very same lies, insults and blasphemies James and Shamoun’s colleagues are unwilling to defend or rebuke – silence is quite telling at times!

Only the disingenuous and/or unaware would take Shamoun for a teacher or even give him cash. Christians, it’s not difficult to buy books and “learn” about Islam for yourself rather than relying on this dishonest man or any other self-styled “expert” on Islam.

PLEASE stop giving him cash and/or encouragement – the man is clearly shaming the church and doing all within his power to end Muslim-Christian civility and dialogue. Sad but true!

Christians, how do you expect us to believe you have the holy spirit when your co-religionist behaves in such a shameful fashion and is NOT rebuked by any of you!

Muslims are the brothers/sisters of Jesus

I am thinking of asking James to rebuke Sam over this episode. However, I don't really want to be subject to a potential disingenuous tongue-lashing from James nor do I want to be accused of trying to get his "attention". Who knows, I may send him the link in the evening if I muster enough courage :)

Here is the message sent to Sam so he knows he must begin to adopt a more honest and well-mannered approach:

I have just brought back Sam Shamoun Sundays to my blog. As is our wont we﻿ have proceeded with a sharp rebuke of one your misguided comments. God willing I will admonish you or refute one of your lies as a regular Sunday activity. Sam Shamoun Sundays are back - at least until you begin to adopt proper standards of honesty, consistency and decency.

brother yahya there is no point,sam is arrogant,rude and down right nasty and as i showed with a link to a catholic apologetics blog a awhile back james white is his carbon copy thats why he never rebukes him. these lot do not have much standing in the evangelical american world although they both ant the recognition so much especially white since it seems to anyone who reads his blog he seems to suggest there is no one on par with his intellectual capacity!!christianity fails on many levels and one of them is the supposed guidance of the holy spirit,apparently it,the holy spirit, dwells within them and yet these lot lie as if it is thier second nature. when mr white was having is infamous spat with another liar ,mr caner, each of thier suppoerters were accsuimg each other of not really being reborn and thus not saved but they at the same time claim they can feel the presence of the holy spirit within them!!! also brother i dont think you really have to write a rebuttal to thier every claim/accusation because most of them are just so ill thought out and not very well written, case in point sams apparent rebuttal to abdullah kunde in his debate against samuel green, he has written 3 all of them really weak and especially the last one which was the most pathetic because i dont really know what point he was trying to convey and some of his statements seemd to contradict each other.i think at one point he was trying to make the case for the trinity by using the 99 attributes for Allah swt as evidence for the mainstream christian concept!!! but as usual he was all over the place and yet his fans were fawning at his feet!! no wonder the south lost the civil war with descendants like these they would never maintained the union.

@Yahya Snow
I just gave another donation to Sam, thanks keep up the good work :)

Fat: I just gave another donation to Sam, thanks keep up the good work :)

He must remind you of nerdy librarians.

fat guy is just following pauls guidance in corinthians.
STUPID IS AS STUPID DOES

Its funny how Fatman would rather give his money to a fat, gluttonous,idiot like Shamoun rather than to a charity that helps, say, people in Third World countries suffering from poverty and famine.

Acts 17 Islam Conference in Long Island, New York
Those of you who live in the New York/New Jersey/Connecticut area might want to mark February 12th on your calendars. Nabeel and I will be doing a one-day mini-conference from 11:00 A.M. to 6:00 P.M. No fees or registration

With the name of Allah, Peace be unto those who follow the guidance from their Lord...

So David and Nabeel will be "spending time together"....once again.

I would imagine you are correct in suggesting these folks are not interested in accuracy or responsibility. :(

Yeah, Sam did put together a three part piece. I may dabble with it on Sam Shamoun Sunday but I think TGV was saying he was going to do some sort of response - erhaps I misunderstood.

Sometimes you just have to correct folk such as Sam as they get ahead of themselves if people leave them to their own devices. Sad.

I appreciate the fact you have now changed your handle. I did advise you to do so; I'm glad you have acted upon such advice.

Radicla, you were encouraging folk to give $100 dollars to Sam the last time he was caught in unchristian behaviour (deception/misbehaviour). So I would not be surprised if you did actually throw a few dollars Sam's way.

It is sad to see him being caught presenting lies is stimulating you to donate cash to him. It speaks volumes as to what is in your heart.

I ask you to have a rethink and I call you to the Truth.