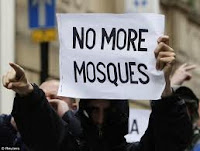 A Few Islamophobic "Christians" Bashing Islam
This seems to be a regular ploy by internet Islamophobes – they trawl the internet and find sad and emotive stories involving Muslims (generally brutal or sexual) and wade through the victim’s pain and sad plight whilst manipulating the story to bash Islam.

An Indonesian migrant worker in a Saudi Arabian home was abused viciously:

Her employer - who has been taken in for questioning by police - is accused of cutting off part of her lips with scissors, scalding her back with an iron, fracturing her middle finger, and beating her legs until she could hardly walk.

These actions are terrible and NOT Islamic. I, as a Muslim, pray the lady makes a full recovery and pray the perpetrators of this crime are brought to justice.

Christian bigots (Acts 17) don’t pray they wade through misery and glory in it!

I received a message from a friend concerning a Christian extremist website that had featured it in order to bash Islam and Muslims:

On his [ the website owner – David A Wood] bigot riot of a blog and must admit I am raging.

“However, I cannot believe that this bigoted fool of a man (Wood [the owner of the site]) would stoop so low as to use this poor girls misfortune as a means to attack Muslims. What a wretched opportunist he is. How on earth he could justify this is beyond me”

The comment says it all. This (David Wood of Acts 17) is a human being who is blinded by hatred and will use the misery of others to fuel his agenda of demonization and self-promotion. However, it seems as though a bigot riot is taking place as the site has attracted some horrendously Islamophobic commentators.

Is this person for real? This act is NOT Islamic. A Muslim carrying out a crime does not make the crime Islamic; drop the hatred, Donna, and have a rethink – please.

Christian fundamentalist (Jabari) thinks Islam is doing this to people:

Can you show me where in Islam this action is allowed? No you cannot. So please stop embarrassing yourself and using the plight of this poor lady to further your bigotry.

cmclvr needs to go to the opticians:

“Take a closer look. It is pure Islam at work!”

He goes off on a lengthy rant that I shall not sift through, he clearly offers nothing but absurdity and insensitivity.

Misery is fuel for extreme Islamophobes and their pals

You know what I am not going to continue. These folk are trampling on the plight of this lady. I for one want no part in it. As the emailer wrote “but this story is heartbreaking enough without that Islamophobe Wood using that poor girl as a platform for his bigotry and hatred of Muslims”

Please grow up. Grow up the lot of you.

Christians why do you support such hate filled and manipulative folk within your churches. They claim they act for Christianity yet are only in it to further themselves – even if it means trampling on the misery of others.

…They come to you disguised as sheep, but in their hearts they are vicious wolves (Mt 7:15)

Islam = Peace and surrender to the will of the Allknowing.

Nice piece Br. Snow. I wish people were more open-minded about these issues and sought for a more professional opinion than David Wood's. He's a con-man, driven by delusions of grandeur, and who knows, perhaps fame?

Why is it he reminds me of the Templar Knights?

Yahyah here is the link you asked for about David Wood. I've included a link to the comments section where it all took place.

Pretty good post. I just stumbled upon your blog and wanted to say that I have really enjoyed reading your blog posts

This is very inspiring work you have created for us. Some people need to know that these things can ensue to anyone. You have shown me a better view now.